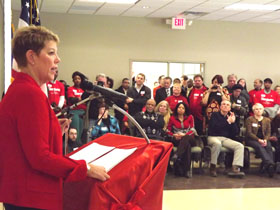 The DFL field for Minneapolis mayor increased by one as former city council president and Northsider, Jackie Cherryhomes announced her candidacy for the city’s top job.

The announcement came on Feb. 16 in front of a room full of enthusiastic supporters – many clad in red Cherryhomes campaign t-shirts –at Standard Heating and Air Conditioning, 130 Plymouth Ave. Cherryhomes said the location of her announcement was significant because the company chose to stay in Minneapolis and relocate to North Minneapolis.

Though Cherryhomes has not served in office in more than 11 years, she said she has remained vigilant in improving the conditions of her city’s residents.

“My family and I recommitted to Minneapolis and found new ways to contribute to my city,” said Cherryhomes, whose husband, defense attorney F. Clayton Tyler and daughter, 15-year-old Emma Tyler, were on hand for the announcement. Emma Tyler introduced Cherryhomes to the crowd. 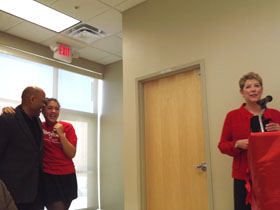 If elected, Cherryhomes, who would be the first Northsider to serve as the city’s mayor, said her top priority would be jobs. She said the city has ample numbers of people who are ready and willing to work and it is up to city leaders to attract industry to the city.

“What I hear is we don’t have land and a workforce,” said 58-year-old Cherryhomes. “I don’t believe either is true. I want to know why FedEx went to the north suburbs and not to northeast Minneapolis.”

Cherryhomes has not served in public office since Natalie Johnson defeated her in 2001 in her reelection bid for city council. Cherryhomes lost that race by just 72 votes. But Cherryhomes, who for the last decade has been working as a state and city lobbyist, said now is the time to reenter her career as a public servant.

“I’ve gotten to a point where I see a lot of dots that need to be connected (for this city) and I can’t (connect them) as a citizen anymore,” said Cherryhomes. “I need the bully pulpit as mayor.”

The city’s first woman and first African-American mayor, Sharon Sayles Belton agrees that Cherryhomes needs the platform of mayor to transform the city.

“As a former mayor (of Minneapolis), I care deeply about this city and I believe Jackie can grow this city’s tax base and create jobs,” said Sayles Belton. “She knows how to work with people to get things done. That’s the kind of leader we need.”

Sayles Belton said she and Cherryhomes worked closely together on a number of projects while the two were in office. The two are credited with a revitalization of downtown. During their terms, the city purchased the Target Center and redeveloped Block E and multiple theaters.

“She’s going to make sure everybody in our city works,” said Higgins. “If people have barriers to jobs, she’s going to work to remove those barriers.” Higgins said Cherryhomes is currently working with a reentry program to assist former prison inmates in transitioning to civilian live.

Much is being made about the fact that no North Minneapolis resident has ever been elected mayor. Cherryhomes and her supporters said that barrier will soon be broken.

“We’re a part of a big tent,” said Cherryhomes. “We have Democrats; we even have Republicans and we have Independents in this room all in support of me. This crowd looks like our city.”