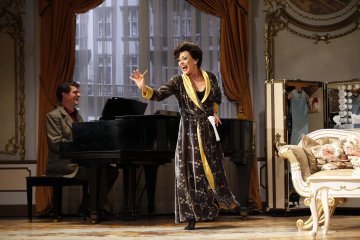 It was a good night to be Judy on September 24 at the State Theatre, as two different actresses garnered Ivey Awards for their portrayals of Judy Garland in two different shows: Tracie Bennett in the Guthrie Theater’s End of the Rainbow and Jody Briskey in Beyond the Rainbow at the History Theatre. In emotional speeches, both women cited Garland’s Minnesota roots.

The eighth annual Iveys had a bit more of an indie air than usual, with Brave New Workshop vet Shanan Custer playing desperate and starstruck as host. The Emerging Artist Award, one of the most important recognitions each year, went to Fringe Festival sensation Isabel Nelson, whose revival of Ballad of the Pale Fisherman—originally a 2010 Fringe entry—at Illusion Theater won an Ivey for “emotional impact.”

Presenters seemed to have worked out a comfortable independence from the teleprompter; introducing the Emerging Artist category, 2011 winner Anna Sundberg noted that the award had previously gone to a list of acclaimed actresses and “some other bitch” (meaning herself). When TigerLion Arts’ flying dragon had finished singing—in one of the evening’s several musical interludes—Custer took the stage and exclaimed, “Jesus!”

Rick Shiomi, founder of Mu Performing Arts, won the Lifetime Achievement Award and invited anyone in the house who had ever worked with Mu to take the stage with him and share the credit.

There was also a political charge to the night, with multiple people—including Minneapolis mayor R.T. Rybak—expressing hope that attendees would vote no on November’s ballot questions. In a statement recognizing the 100th Anniversary of the Actors’ Equity Association, there was also a pointed reference to the fact that the AEA has fought for marriage equality.

Joseph Scrimshaw and John Middleton, who managed to work the names of all the awards’ many sponsors into a one-scene drama between two fighting brothers, may have achieved the evening’s greatest emotional impact. At one point, threatening to walk out on his brother, Scrimshaw’s character declared defiantly that he planned to go to a place where he could see the open sky—a place, as it were, over the rainbow. He paused, and sighed. “Walser Automotive!”

Correction 12/29: This article originally misspecified the awards won by Ballad of the Pale Fisherman and Julius Caesar. The errors have been corrected.