Sitting around a firepit in a South Minneapolis backyard on a recent Saturday night, it was clear: It’s nice to have a yard. You can see stars south of Lake Street! The bike ride was a bit of a schlep–when you don’t have a car, Lake Nokomis may as well be Lake Pepin if you don’t want to transfer twice on a bus–but it was one of those beautiful cusp-of-fall-in-Minnesota-type-of-nights and so it was alright. It’s good to have land.

Due in part to the Twin Cities’ lack of a major geographical obstacle, like an ocean or a mountain range, we’re one of the sprawliest metropolitan areas in the country. Using the US Census Bureau definition (the one that doesn’t include St. Cloud) of our metropolitan area, we’ve got thirteen counties with about 3.4 million people, which works out to roughly 490 people per square mile. Also, six area codes. Our 490 people in a square mile compares to, say, the Chicago metropolitan area’s 1,318 people per square mile. Those density numbers are simplistic and prone to misinterpretation for a couple reasons. For one, county units of government in the United States aren’t always great for putting together statistics…looking at you, St. Louis County, Minnesota, which contains the some of the most isolated wilderness in the country, but also Downtown Duluth. But more importantly, looking at raw numbers of people and dividing that by total area doesn’t factor in land use.

Land use is important. Anyone who has driven on freeways on the outskirts of American cities would be familiar with things like apartment buildings plopped in the middle of surface parking lots hemmed in by freeways–freeway armpit apartments. I’d argue that, on the whole, the kind of low-density development in much of South Minneapolis where you put ~24 single family houses on a block with an alley in the middle is probably preferable to building townhouses without a town.

Since World War II, as has been discussed ad nauseam, we really went off the deep end trying to not build human-scaled grids anymore. You can see it as you pull away from the Hennepin and Washington intersection in Downtown Minneapolis and head north, west, or south. We’ll head south for this. All photos are from Google Maps, taken at the same scale from select representative spots throughout the south metro.

We start out in South Minneapolis. It’s the city. It’s not downtown, but there’s commerce in this snapshot. You’ve got about ~24 housing units on each block, and given what household sizes are now, there probably aren’t much more than 50 people on any given block (this is a high guesstimate) though that’s certainly a huge decrease from what it would have been when these houses were first built. These streets are easy to plow and easy to navigate on. Traffic can go many different directions. There are alleys with rear garages on all these blocks, though not all South Minneapolis blocks have them. And everyone still has an ample yard to surround their single family house. The houses are fairly close together, and you may even see your neighbor by accident. 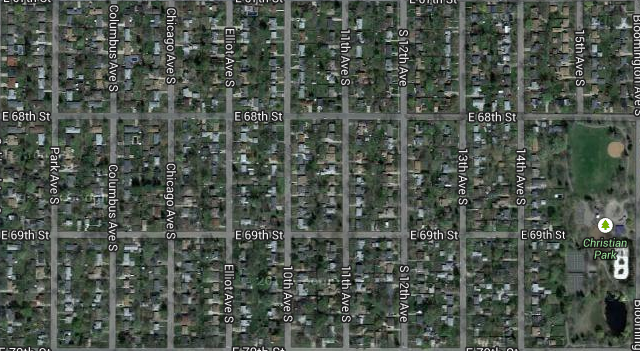 Here’s Richfield, directly south of Minneapolis. The streets have the same names. The blocks are a little bigger, don’t have alleys, and have fewer units with bigger lots on each block. This is still easy to navigate. Yards are eaten up a bit by driveways. It’s not in the snapshot, but commerce is different here–Richfield doesn’t have the legacy of streetcar intersections and the leftover commercial density you get at those seemingly random points throughout Minneapolis, St. Paul, and suburbs like St. Louis Park. I should point out that, to Richfield’s credit, they’re filling in a decent high-density area along Lyndale. 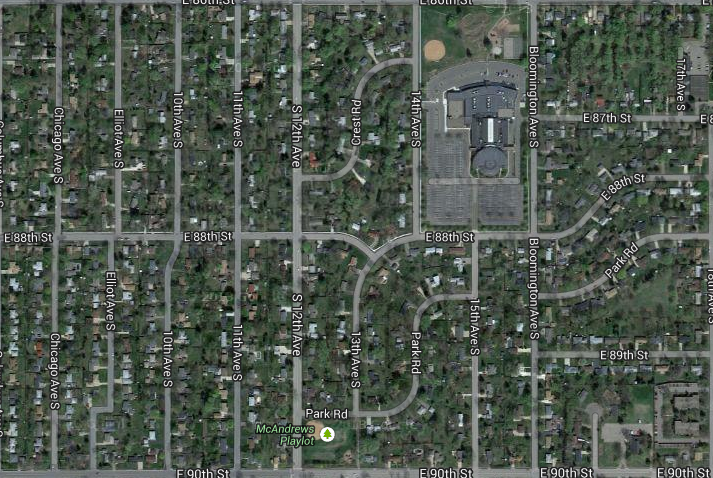 Now we’re in Bloomington, and now we’re shooting for the countryside. Americans have been pretending to live in the countryside for ages, but now we’re at the point in history (late 50′s) where things start getting a little cartoonish. The density is getting lower. Which isn’t to say Bloomington is terrible, because it’s definitely better than most. You’ve still got Minneapolis street names! Land uses are more separated in Bloomington, and you’re going to need a car to do much of anything, though you could bike to Target pretty easily if you wanted to. Driveways are getting larger as we go further south, to the point where they actually take up a pretty significant portion of some of these lots.

Here we’ve jumped the Minnesota River and found ourselves in Burnsville, in Dakota County. I was hoping this would be a subdivision with a funny name, but it wasn’t. No alleys, though the houses look closer together side-to-side compared to the ones in Bloomington. The grid is gone. All the traffic is funneled through a handful of streets to a few stroads to things like chain retail in strip malls off of stroads, or to industrial-strength schools, or to the freeway to get elsewhere. More so than in places like Minneapolis, Richfield, or Bloomington, the kids in these areas are going to be glued to a TV or a parent with a car until they get their own driver’s license. 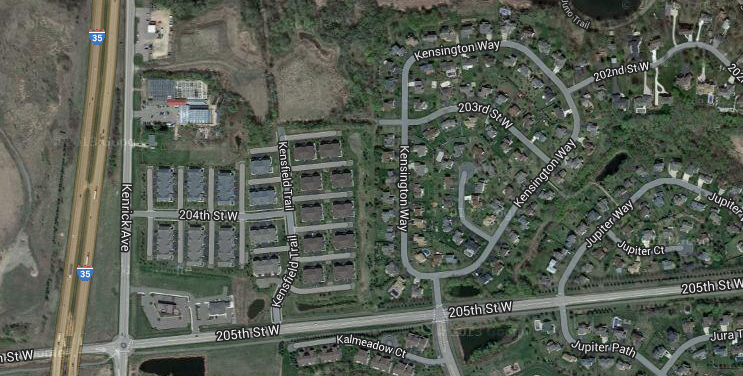 And this is where we end up, in Lakeville, past the Pizza Ranch but not quite to the exit we take to go to the gun club south of Prior Lake. I wanted to get those town-less townhouses in the shot.

So the point I’m driving at is that all these snapshots are full of single family houses with yards. If we’re working with a white picket fence version of the American Dream™, you can get it in any of those places. There’s this fantastic documentary put together by Twin Cities Public Television and the U of M called Minnesota: A History of the Land. There’s this part at the very end where there’s a young family and they’re thinking about where they want to buy a house, and the father mentions being interested in Elko New Market, because he wants “land.”

Most of Minneapolis and St. Paul are swaths of single family houses with yards. If we had continued spreading out the Twin Cities after World War II in a way similar to what we already had, the urbanized portion of the metro area would be far smaller and much easier to govern–and you’d still be able to have block parties with rented bouncy castles in front yards. Instead of freeway interchanges the size of lakes, we’d be able to live closer to nature in actuality, and not just in the names of subdivisions platted on forests that were clear cut. You may still need a car, but you wouldn’t necessarily need to drive three miles to buy a soda, and your neighborhood would be much more amenable to future transit service if density eventually increased.

And, most importantly, you still get your yard.