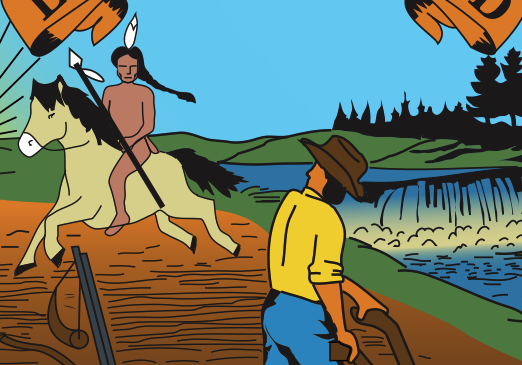 An American Indian and a European settler appear together on the Minnesota state seal, but they aren't having much of a conversation.

This whole South High school situation is really affecting me. When I heard about the fight that happened two weeks ago, just two days after I had written an article about the anti-racism group at the school, s.t.a.r.t., I found myself crying for the school that I once attended. How could this supposed race riot have happened, when there were all these smart kids working to combat the racism at their school?

The more I talk to the students, the more I’m confused about what actually happened that day. My feeling is that the situation is a lot more complex than it has been portrayed, but regardless, clearly there are issues that need to be addressed, not just at the school but in our greater community.

The s.t.a.r.t. students invited me to a dinner, last Wednesday that they hosted for students of South to talk about race. They asked that I not quote students from the meeting, so that people would feel free to talk about what they were feeling; I went as an observer and to lend my support for what they were trying to do.

Going to that meeting completely took me back to my days at South. There were the earnest organizers, filled with passion and a drive to solve the problems they see at their school; there were some jokers who laughed at the serious discussions, but who were put in their place by the others; and then there were some white students who spoke about feeling discriminated against, themselves. It was difficult for me to hear that. Clearly, no one at the school has been teaching them about white privilege. They’ll get that eventually—in college, if they go—but it irritates me that it’s not something that is part of the core curriculum.

Then there was a student who could have been me back when I was in high school, a kind of doe-eyed Pollyanna type who spoke about how happy she was that the students were having these important conversations about race. This was and is me—I don’t always “get” it. I don’t always understand the experiences of communities who don’t have the privilege I was brought up to enjoy, but I’m still so full of hope that somehow, we can figure it out and make a more just society.

Many of the white students talked about how out of touch they felt with the concerns raised by the students of color, and that they felt fearful of offending people by simply talking about race. This to me is a huge problem, and indicates a larger issue with our society at large. It’s not just at South: white people as a whole live in this blissful ignorance of how race affects others, and in the land of Minnesota Nice, we simply don’t speak of it in public spaces.

A big part of the discussion had to do with concerns that though the student body is diverse, opportunities to interact with people from different backgrounds are few and far between. Students in the All Nations program, for instance, mainly stay in one corner of the building, and there’s not much interaction between the Open students and the Liberal Arts students.

When I went to South, it was a similar situation. At that time, in the mid-1990s, the Liberal Arts program was a magnet, and I rarely had more than a few students of color in my classes.

I suspect South is actually doing better than other Minnesota schools—which have been shown to be getting less diverse than they were 20 years ago, not more. Still, the question of finding ways for students to interact—whether that’s with more intentional scheduling of classes or finding times and places within the school day to make bridges and find dialogue—remains.

This isn’t just about one school. In some ways, what we’re seeing at South and Washburn are microcosms of the rest of the country. High school seems like a good as place as any to really look at these issues. These young people are going to be the ones to bring us into the future, hopefully into a more tolerant and open society.