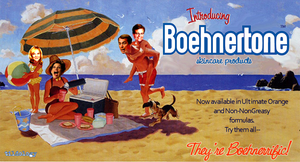 As an inveterate Boehner aficionado, I watched the Morning Joe clip, John Boehner’s Tan MOCKED By ‘Morning Joe’ Gang (VIDEO) with enormous glee. The video mashup in the post was borrowed from a Politico entry, John Boehner’s Distracting Shade.

News that Boehner is coming to Minnesota to fundraise for Hayfield Republican Randy Demmer has only heightened my pleasure in the afterglow.

That’s one heck of a beach party.

I’m not alone in my anticipation. The Star Tribune reports in Walz finds calmer constituents this summer:

Earlier on Monday, Walz’s Republican challenger Randy Demmer announced that House Minority Leader John Boehner, R-Ohio, would be campaigning for him in Minnesota later this month.

“He’s come twice. I think he maybe helps me,” Walz quipped, referring to Boehner’s visits during past campaigns.

Perhaps Walz is remembering the boost the Ohio Republican gave six-term incumbent Gil Gutknecht in 2006. Shortly after Boehner’s visit, I posted  KEYC-TV: Gutknecht admits race is close. Gutknecht went on to lose by five percent. The win was considered one of the biggest upsets of 2006.

Boehner’s 2008 visit to Rochester on behalf of Brian “Drill Here, Drill Now” Davis was even more helpful. It helped the Walz campaign highlight Davis’s own willingness to risk Social Security in a faltering stock market.

It’s enough to make me raid the nearest Herbergers in search of high-end chemical tanning agents in honor of the bump the visit should give the Mankato Democrat. Good times.

Image: Tild imagines the possibilities of the coming fundraiser. Demmer seems especially happy for the boost from Boehner.