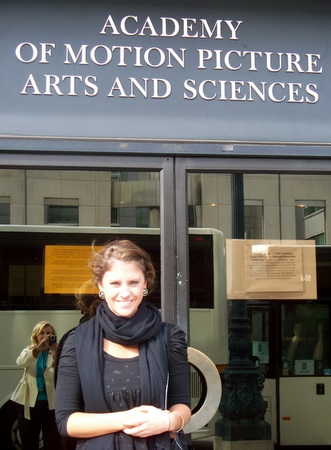 Lindsay and I at the Academy Awards building in Bervely Hills, CA during Oscar Week events.

When I applied for Academy Awards press credentials last November I thought that pretty much any media representative could gain access. Wrong. I had to fill out two applications. Arts editor Jay Gabler needed to verify my assignment to cover the Oscars for the Daily Planet. From a pool of about 5,000 individual applicants for press credentials, only about 300 were approved. The approval of my credentials made me part of an exclusive group frequently referred to by Academy representatives as “the legitimate press.” (As opposed to what, I often wondered.) Specifically, I was approved to sit in the backstage interview room where award-winners met the press immediately after receiving their awards. My daughter Lindsay was one of about 90 photographers approved for access to the red carpet.

300 people work in the production office for the Oscars and there are 100 press, production, and catering trailers and vehicles. A crew of 130 just handle the red carpet arrivals area. It is their job to move the movie stars along the 500-foot carpet. 350 crew members work during the telecast.

At the nominee screenings and receptions during Oscar week, video cameras and television outlets were sequestered behind a velvet rope and had to ask questions from there. Because we were from a print media organization (as opposed to, say, a television network), Lindsay and I were allowed to wander around the room with notebooks and ask questions face-to-face. The Academy treated print journalists very well, and we were often first picked for perks such as having a private guide for the Governor’s Ball venue. We were fed well at all the events and shared food with Oscar-nominated filmmakers, Academy governors, and stars of long ago. That was a highlight.

We had to pay attention to details. RSVPs were required to all events, then confirmation was sent about your RSVP, then the venue would sell out so you had to RSVP a third, sometimes fourth time. Miss one RSVP and you couldn’t get in. Demand was high for Oscar week.

The security involved was incredible. I needed to go through a mandatory “backstage interview room walk-through” five days before the ceremony. We had press clearance badges but still went through multiple security kiosks.

Both Lindsay and I were allowed to rehearse where to go, and had fun doing that in a more informal setting; we could watch the set-ups and chat with other media reps.

Some press badges ended at 11 a.m. the day of the show, so they all had to leave. Other press badges only allowed the holder to run back and forth along a designated path to their press trailer. To get to the backstage interview room, I needed to follow a mile-long route (“the one and only path,” it was made clear to us) through a maze of barricades along the streets of Hollywood and into the Kodak Theater, all in a formal gown.

Once backstage, we were one door from the actual stage area, and the head publicist, Leslie Unger, told us: “See those exit signs? They don’t exist for you. You will be arrested if you go through them.” I am sure they were terrified of a renegade media person trying to get an exclusive on stage. (In 1974 a streaker ran across the stage wearing nothing more than a peace sign. Unflappable host David Niven quipped that “probably the only laugh that man will ever get in his whole life is by stripping off and showing his shortcomings.”)

Several Academy press badges were photographed and posted on Facebook. This resulted in immediate forfeiture of the offenders’ credentials. “That is the highest form of stupidity,” said Unger. “You will get kicked out of the event and many have. [The Academy] has a team of people that check Facebook and Twitter. It’s an extreme security offense.” Unger told us to “be professional, courteous, and have integrity. You are a representative of your media.”

The backstage interview room had Academy reference librarians on hand to answer trivia questions journalists might have about the Oscars. A team of court reporters was on hand to transcribe all the interviews. An Internet connection for media outlets cost $350, paid in advance. I passed. Instead, Lindsay and I stayed up late and woke up early, filing our articles to the Daily Planet and notifying Jay, who edited them from the home of friends he was visiting in Massachusetts and published them so readers in Minnesota—and beyond—could follow our reports.

We received an official Academy Awards program book and an document listing the order of the show, which could not be released to the public at any time. It was for reference only.

Hollywood loved the media attention and the Chamber of Commerce put on a reception where the press could conduct learn about Hollywood (it was here that I learned about Dennis Hopper’s forthcoming star on the Walk of Fame), meet representatives of local businesses, have BBQ in the backyard, get a spray-on tan or beauty make-over so we’d be red carpet ready, and get swag bags featuring bobbleheads of local news anchors. 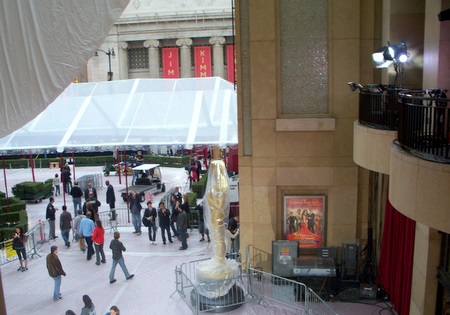 Above: From this, with wrapped-up Oscar statues to… 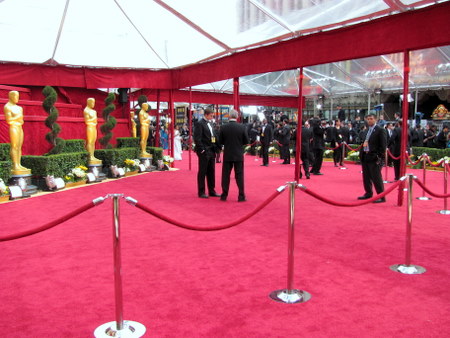 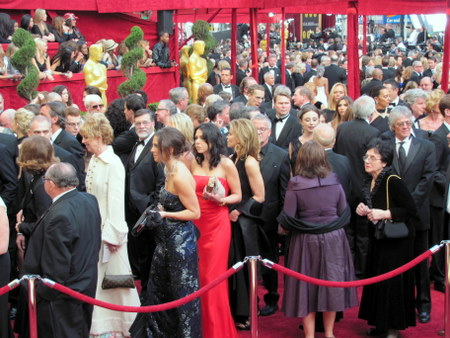