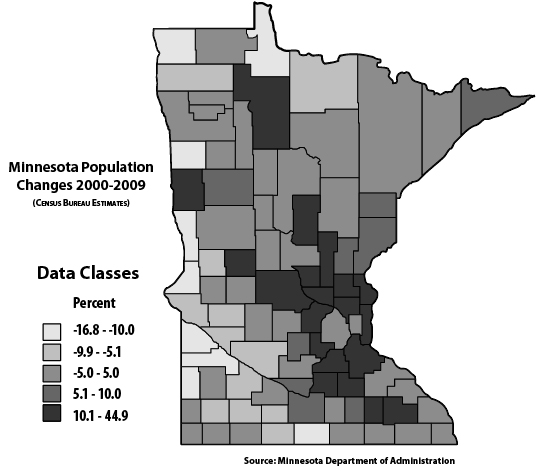 Some members live so perilously close to the adjoining House district that, in 2012, they may find themselves running for election against another seated member.

That’s the nature of redistricting – the every 10-year process of slicing and dicing the state into equal districts by population to ensure that all citizens have a voice in the lawmaking process.

Some have called it the highest stakes political game the Legislature can play; it involves math and partisan politics. Using history as an indicator, it can be an emotionally charged process that in the recent past has only been resolved by the courts.

The state is currently divided into eight congressional districts; 67 Senate districts and 134 House districts. But after every census the movement of residents, especially from rural to urban areas, alters the state’s district border lines. Ten years ago, the average House district contained about 36,000 people.

Population estimates in 2009 indicate Rep. Andrew Falk (DFL-Murdock) has just 33,093 constituents, while four representatives have more than 50,000 constituents, topped by the 57,836 residents in the district of Rep. Mike Beard (R-Shakopee).

Minnesota recently learned that although its population growth has slowed, it will retain its eight congressional seats, but where those district lines will fall is yet to be determined. It depends upon where people have migrated from and to, and where and who is deciding on the lines.

State Demographer Tom Gillaspy told the House Redistricting Committee Jan. 18 that 2010 census figures show some Minnesota counties – mostly in the western and southwestern parts of the state – are among the nation’s highest when it comes to experiencing sharp and, most likely, permanent declines.

But Minnesota also has some of the fastest growing counties in the nation – Scott, Carver, Wright, Sherburne, Chisago and Isanti counties – all within about 60 miles of Minneapolis.

Gillaspy said the redistricting process can be compared to squeezing a balloon – a push in one direction changes the configuration somewhere else.

As goes the population, there also goes the representation.

This squeeze of people leaving the far corners of the state expands the population representation in the urban areas – but not equally. While some suburbs have grown, some parts of the metro area have lost population.

“Within the Twin Cities is a cluster (of districts) that are smaller, indicating that they may need to be expanded in size, but they are surrounded by districts that are larger than the equal population size,” Gillaspy said.

Looking to the congressional divide, Gillaspy said the second and sixth districts are substantially larger in population size, while the seventh, fifth, fourth and first have lower population numbers. So, expect changes there as well.

Redistricting begins when the state receives the census data.

It comes as no surprise that the Sun Belt states gained substantial population. For example, Texas added 4.3 million residents – and four Congressional seats. If the shift had been any greater away from Minnesota, we most likely would have lost a congressional seat.

The House has appointed a redistricting committee chaired by Rep. Sarah Anderson (R-Plymouth), which will ultimately be the first point of contact for a redistricting bill. One perk of being in the majority is the control that party has over the process of drawing new state and congressional lines. Republicans held the reins in 2001 and the DFL in 1991.

The 2011 redistricting process began with a December 2009 meeting of the Subcommittee on Redistricting. Consisting of two members each from the House and Senate, they are responsible for assisting the Legislature in carrying out the responsibility.

By March the state will receive a detailed count of population, and then the process of redrawing the lines begins in earnest, with Feb. 21, 2012, – 25 weeks before the primary – being the deadline for a bill to the governor.

In 1991, 24 pairs of House members ended up in the same district – seven in Greater Minnesota and five in the metro area.

In 2001-2002, 10 different Congressional redistricting plans and 11 different legislative redistricting plans were submitted, said nonpartisan House Research Analyst Matt Gehring. The process yielded one bill that failed in conference committee, and a set of plans was then submitted by the governor’s advisory commission. The Legislature adjusted boundaries affecting four House districts.

The redistricting process will culminate with an election of the full Legislature. Senate seats are usually a four-year term, except after redistricting.

The law allows for court intervention if the Legislature and the governor can’t agree on a plan, or if someone chooses to challenge the results – and our history is long on court invention.

If the process gets messy, past decisions can come back to haunt new plans.

According to Gehring, the state’s first redistricting took place in 1960, and once the boundaries were drawn, Minnesotans filed a suit in federal court alleging that the boundaries of 1913, used in the process, violated the 14th amendment.

During the 2000 redistricting, plantiffs asked that the three-judge panel’s decision of the 1990 redistricting plan be reopened and that the districts declared unconstitutional. The motion was granted and in July 2001, a five-judge panel was appointed to resolve the issue. In March 2002, new legislative and congressional district boundaries were set.

• Feb. 21, 2012: New congressional and legislative districts must be in place (25 weeks before the state primary)