If there’s one general insight that has stayed with me from the IR501 (International Relations and Religion) course I took in grad school, it’s that categories suck. “Christian,” “American,” “Arab,” “Muslim,” “Liberal,” “Friend,” etc. serve an important purpose of helping us order the complex information we process every day, but they also simplify and homogenize that complexity.

One example is the category of “Iraqi” in American media. When the majority of printed pictures of Iraqis portray “terrorists” or scenes of death and destruction, “Iraqi”–which is an incredibly diverse category–can be reduced to “violent terrorist” in the minds of those who digest media uncritically.

During my month here in Najaf, my host Sami Rasouli has introduced me to many Iraqis who don’t fit the category, “Iraqi” (as it has been defined in America). For the sake of exploding / adding nuance to that category, I’d like to share a little about a few of these people. They have invariably been generous, welcoming, and kind—perhaps better descriptors for the category of “Iraqi”–but they are also diverse. 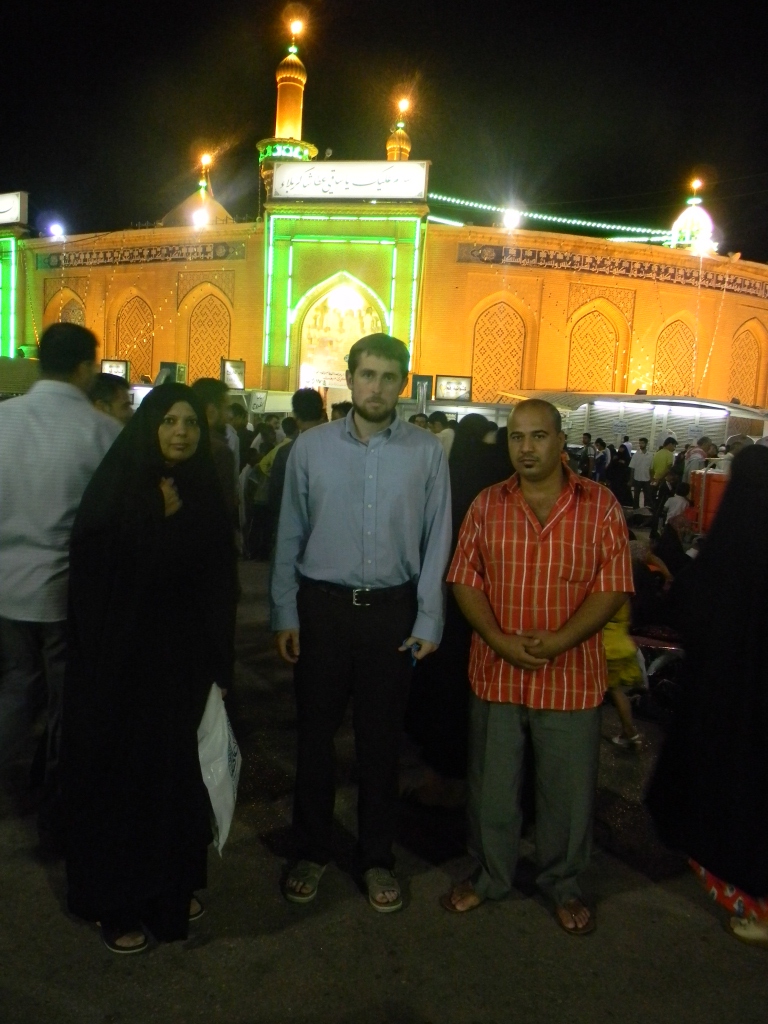 Left: Fatin, me, and Wathiq

Fatin is a conservative, observant Muslim who visits the shrine of Imam Hussein Ibn Ali nearly every night with her husband, Wathiq. She is also a feminist artist whose paintings appeared in the exhibit, “The Art of Conflict,” in Minneapolis in the summer of 2010. She traveled to Minneapolis on a ticket paid for by a grant that the Iraqi and American Reconciliation Project received from the Metropolitan Regional Arts Council. In Minneapolis, she talked about her art and the experience of Iraqi women during the war, a voice that has often gone unheard. She believes that her faith empowers her as a woman, rather than the common assumption in the West that it oppresses her.

Hussein is a few years younger than me, recently graduated from the University of Kufa with a degree in Chemistry. He is a student in the English class that I help teach and took Sami and me out for dinner after one of the classes. On the way he asked me my opinion of Nietsche. I said I didn’t know very much about him. He said Nietsche is his favorite philosopher and asked if I knew that Nietsche said, “What doesn’t kill us, makes us stronger?” I thought this would be a hard philosophy to adopt in Iraq, although Nietsche, who also said “God is dead,” might resonate with those who have lived through the tragedy of war. Hussein also explained to me the story of Imam Hussein, whose shrine I had visited with Fatin and Wathiq. Hussein was a grandson of the Prophet Muhammad who was killed in 680 A.D. for opposing what he considered an unjust ruler. 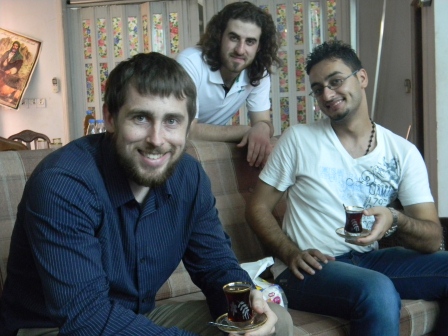 Left: Me, Hayder, and Ali

Hayder is also a few years younger than me and in the English class that Sami and I teach. He is a member of the national tennis team, has hair down to his shoulders, and loves guitar. He and his family hosted Sami and me for one night in Baghdad last week. In 2007, militants killed his coach and two of his teammates “for wearing shorts.” Hayder was not in the car his coach was driving when it was stopped by the militants. He didn’t seem interested in talking about it, but drove me, Sami, and my friend Ali from the University of Baghdad around town. I felt sad at the evident destruction and disrepair caused by the U.S. invasion, but he and Ali joked about it.

During my first week in Iraq, Sami and I met with Sheikh Ahmed Kashif Al-Getaa, a Muslim scholar about my age who, along with his father, is interested in interfaith dialogue with counterparts in Minneapolis. Sheikh Ahmed is a studious, quiet man about my age. We both held the Tasbeeh, or prayer beads, in our hands while we talked. He asked me about my studies, talked with Sami about the Muslim Peacemaker Teams, and led us on a tour of the Kashif Al-Getaa Foundation’s library. He reminded me a lot of one of my friends who is a PhD student in religion in the United States. 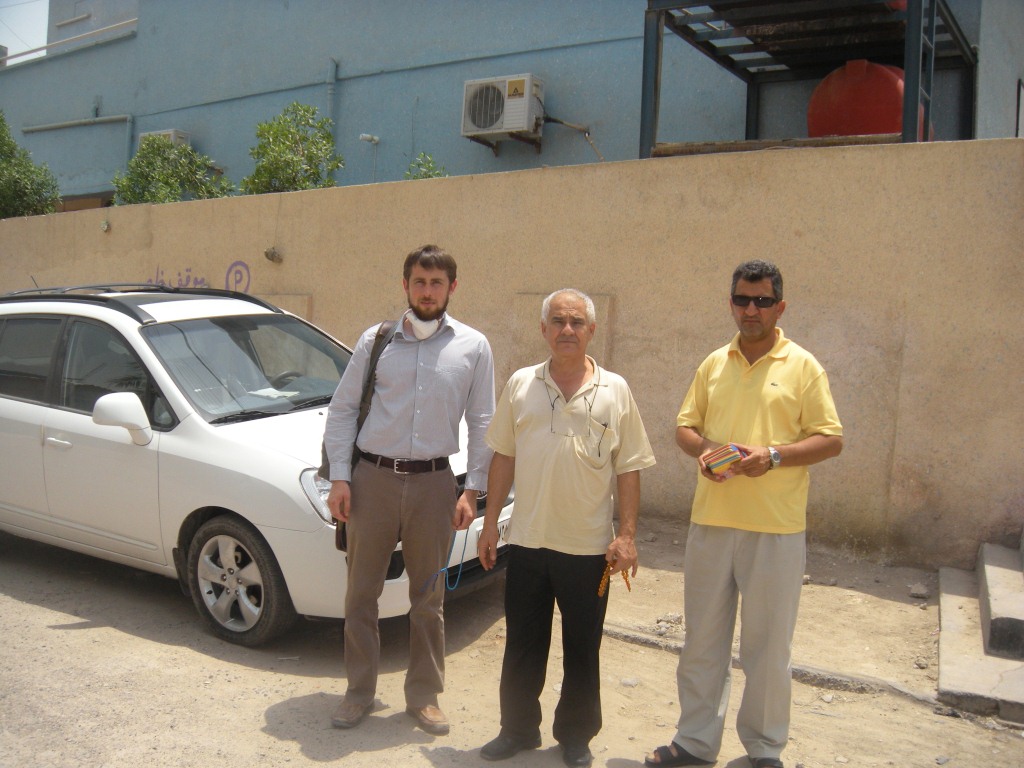 Right: Me, Rajaa, and Kamel in Basra

Rajaa works in Basra (Iraq’s second largest city, located in the south) for the United Nations. Sami and I took a taxi to Basra last week to meet with him and visit a small private school. He met us in downtown Basra and took us to a nice hotel where we would stay for the night. He refused to let us pay for our rooms. We walked around a few very crowded streets and then to a restaurant for carp, one of Iraqis’ favorite meals. Kamel, owner of the private school and director of an organization promoting civil society in Basra, met us at the restaurant. I was exhausted by the time we sat down, but Rajaa wasn’t even out of breath. He’s 70, but looks like he’s 55. 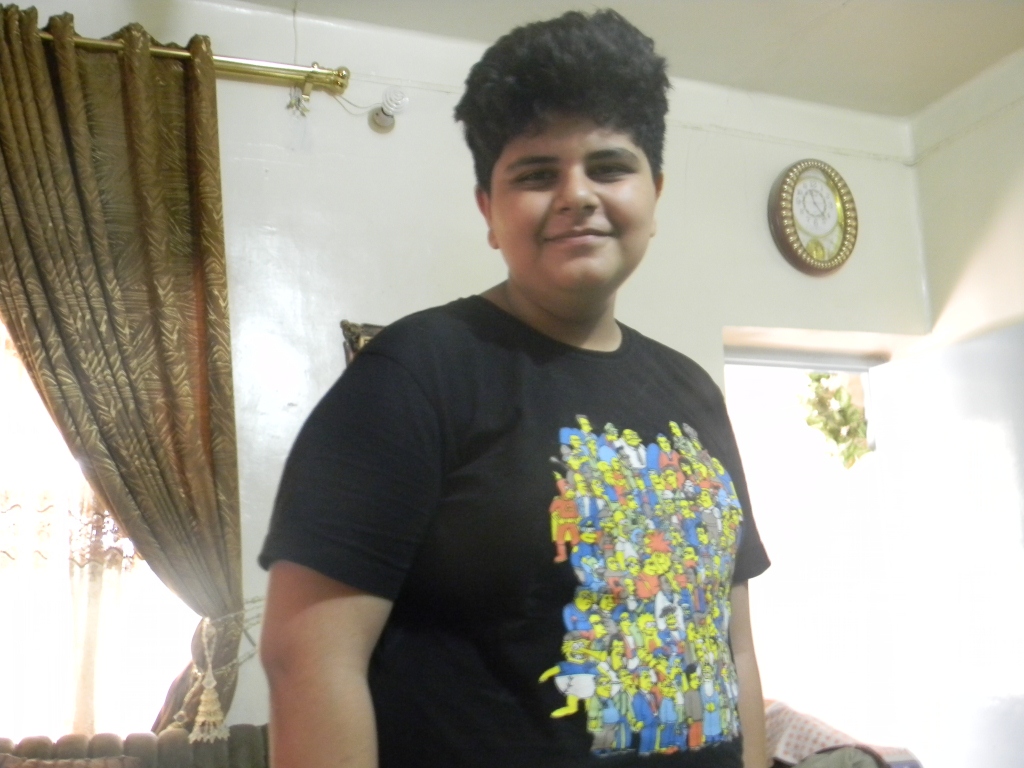 Mohammed Sadeq is 11 years old and likes to play X-Box. He is the youngest son of Ali, who we stayed with for one of our nights in Baghdad. After dinner, Mohammed and his older brother Noor took us to visit the shrine of Musa and Mohammed Jawad Kadhem, two of the twelve Imams in Shia Islam and descendants of the prophet Mohammed. Mohammed wore a Simpsons t-shirt. Like the shrines in Karbala that I visited with Fatin and Wathiq, it felt like a very spiritual place. We sat down to rest in a large open area underneath the shrine. People around us were praying, reading the Qur’an, or sleeping. Mohammed and I talked about cars and X-Box games. At 11 years old, Mohammed doesn’t seem to be too “religious.” 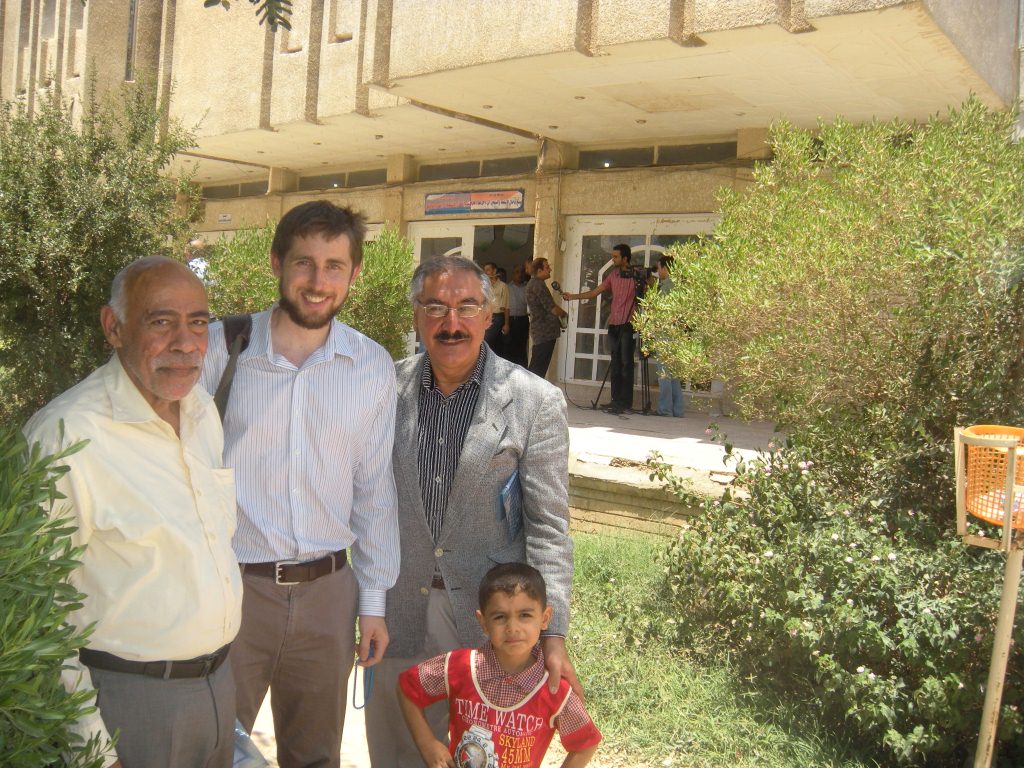 Najim is the co-director of the Muslim Peacemaker Teams. He is also one of few remaining nuclear physicists in Iraq and currently teaches at the University of Kufa. He has accompanied Sami and me to many events, including a seminar against the U.S. occupation at the university on July 4 and a discussion about a new draft law on political parties in Iraq. He visited Minneapolis as part of the first Sister City delegation between Minneapolis and Najaf in September of 2009, and talks about the importance of people-to-people diplomacy. He also likes to make jokes, such as that Sami (my host who lived in Minneapolis for 20 years and now lives in a district of Najaf called Misan) couldn’t bear to leave Minneapolis, so he had to find the closest thing to it in Najaf, “Misanpolis.”

These are just a few of the people that I’ve met here in Iraq, but I hope they help point out that “Iraqi”–or “Muslim,” Arab,” “Christian,” etc.–is more than just a category with definable characteristics. It is millions of individual identities, all with diverse histories, values, and goals. If you haven’t already, please de-homogenize your categories.