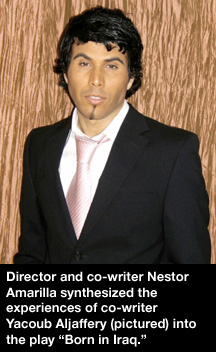 “Since I opened my eyes in the world, I opened them to bombs and fear and war,” says a young refugee who has asked to remain anonymous. He’s 25, an Iraqi refugee who’s made Minneapolis his home for the past 10 years. He supported the U.S. invasion of Iraq with good reason. His father, a Shia imam and resistance leader, was murdered by Saddam Hussein’s regime. Mixed Blood Theatre recently hosted the play Born in Iraq,co-written and directed by Nestor Amarilla and inspired by A’s life.

“Iraq seems to be falling apart at the seams under foreign occupiers and local fanatics,” wrote Riverbend, age 28, on Febuary 23, 2006. She’s become internationally known as the sole woman blogger (real name concealed for her protection) witnessing life under American occupation. British publisher The Feminist Press collected her blog, Baghdad Burning, into a book this past spring. (RiverBendBlog.blogspot.com)

I saw one of the last performances of Born in Iraq (scheduled to have another run in October) and interviewed the young refugee. Listening to his story confronted me with uneasy realities about life under Saddam before the U.S. invasion.

Although I’d heard about Riverbend, I’m skeptical of blogs in general and hadn’t searched her out. Then I stumbled onto a televised reading from Baghdad Burning. Actually hearing Riverbend’s posts through a voice was visceral. She embodied defiant endurance, combined with an often scathing wit. Like an earthy, adult Anne Frank, she’s a searing conduit to life after Saddam under the U.S. occupation of Iraq, showing that it may be even worse than I’d imagined.

From different perspectives, these two Iraqis describe violence and oppression. Both want the American occupation of their country to end.

The young refugee was born in 1980 in Nasiriyah near the Iran border, the country with which Iraq was at war for the first eight years of his life.

“We left Nasiriyah twice because of bombing. The Gulf War of 1991 was horrible. Then, right after the Gulf War, came the revolution and that was horrible as Saddam Hussein put down the uprising,” he says.

He is handsome in a delicate way, with expressive eyes that seem tinted with blue. He relates the events of his life, going back and forth in time, with the death of his father recurring like a terrible touchstone.

Act One of Born in Iraq is set in 1991, opening with a joyous wedding party that Saddam’s security agents invade, searching for the father of the family based on information that he would come out of hiding for his son’s nuptials. When bullying fails, they take away the groom and later shoot him in front of his family. Things get worse as the U.S. abandons the Iraqi resistance and Saddam’s forces prevail.

“I was 6 years old, in jail with my family because my father didn’t agree with the Baathist Party. He was imam of a mosque in our town, and they wanted him to say prayers for Saddam. He refused. They attacked our house at 3 a.m. and put us all in jail. I remember torture in jail. There’s never a moment I forget the death of my father,” he says, reciting the facts quietly with a quaver that occasionally seeps out.

“It was a miracle how we left Iraq. That evening when they killed my father—my sister and I saw it happen—All I remember is running to the river. Then, I lost my family.”

Returning to his empty home, none of the neighbors would shelter the 10-year-old boy—not even his aunt who lived next door. Saddam’s forces ravaged the resistance and fear shut every door. Some decided to join the American troops and took him with them. For seven hours, they made their way through the marshes, as Saddam’s helicopters patrolled overhead.

“It was so scary. If they saw us, they’d kill us. We hid in the reeds,” he says as, remembering, his voice drops.

It was March 1991 and American troops took the traumatized, and now ill, boy to a hospital for three months. Begging not to be returned to Iraq, he was sent, alone, to a Kuwaiti refugee camp. One day, standing in line for water, he noticed someone familiar.

“I could only see him from the back but I knew it was my brother,” he says, flashing his brilliant smile. “He held me a long time.”

The reunited family went to a Saudi Arabian refugee camp for five years. He learned English and helped the UN with translation and filling out refugee applications. He came to the United States in 1996, recently graduating from North Hennepin Community College.

“In 2003, we were glad. We felt hope we hadn’t felt before. Once we got rid of Saddam, we were going to rebuild our country, have democracy,” he says. He supported the invasion to overthrow Saddam, yet says he’s not for war. Having a lingering affectionate admiration for American soldiers—represented in Act Two of Born in Iraq by a kind American soldier named John—while acknowledging American atrocities in Iraq is obviously difficult—almost as if he’s being disloyal. It becomes increasingly obvious how torn he is.

“With the occupation, we separated as one family with different opinions,” he explains, suddenly speaking reluctantly. “People don’t see what they expected from Americans—stable government—like United Arab Emirates—that kind of life. Our country is rich but the people are poor.”

The woman calling herself Riverbend graduated from Baghdad University and worked as a computer professional before the invasion. No one knows what she looks like. Although I think she’s Sunni, I’m not certain. She began her blog in August 2003. An early post reads:

“For Sale: A fertile, wealthy country with a population of around 25 million … plus around 150,000 foreign troops, and a handful of puppets. Conditions of sale: should be either an American or British corporation (forget it if you’re French) … preferably affiliated with Halliburton. Please contact one of the members of the Governing Council in Baghdad, Iraq for more information …”

Riverbend describes members of the new Iraqi government as “puppets” colluding for their own enrichment, or as fundamentalists re-creating a Taliban-like society through death squad intimidation, beatings and murder.

In Feburary 2006, she wrote, “Iraq seems to be falling apart at the seams under foreign occupiers and local fanatics … In 2003, there was general talk of a secular Iraq; today, that no longer seems to be an option.”

In August 2003, Riverbend wrote that “females in Iraq were a lot better off than females in other parts of the Arab world (and some parts of the Western world—we had equal salaries!). We made up over 50 percent of the working force. We were doctors, lawyers, nurses, teachers, professors, deans, architects, programmers and more. We came and went as we pleased. We wore what we wanted (within the boundaries of the social restrictions of a conservative society).”

After the invasion, almost immediately, life for women changed hideously.

Human Rights Watch’s July 2003 “Climate of Fear” reported women and girls were being raped and abducted for sale into sexual slavery, with Iraqi law enforcement responding with “indifference and sexism.” In 2005, Amnesty International concluded numbers are impossible to know because in Muslim cultures “stigma frequently attaches to victims, not perpetrators, making reporting especially daunting …” Victims are also vulnerable to “honor killings,” another insurance of silence.

Guardian reporter Luke Hardin (quoted by Rosen) revealed what most Americans don’t know: Women were arrested as “bargaining chips,” detained in Abu Ghraib, and “journalists were forbidden to talk to them.” Photographs and videos (still unreleased to the media) reveal the sexual abuse and rape these women were subjected to, which Senate Minority Leader Bill Frist called “horrific.”

U.S. officials refer to the March rape/murder of an Iraqi girl by American soldiers as an “aberration,” but, Riverbend writes, “The poor girl Abeer was neither the first to be raped by American troops, nor will she be the last. We’ve been hearing whisperings about rapes in American-controlled prisons and during sieges of towns like Haditha and Samarra for the last three years. The naiveté of Americans who can’t believe their ‘heroes’ are committing such atrocities is ridiculous. You raped the country, why not the people?”

Toward the end of the play, the family of the main characters is subjected to another home invasion—this time by American soldiers searching for “insurgents.”

Unexpectedly, the most vibrant characters in the play are female. The mother, Fatama, he says, is his mother, and her best friend is a vivacious midwife.

“Women wear the cover or not. Iraqi women have a lot more than people think. People think Muslim women just [do] cooking, cleaning, but [the woman’s] is the number one word in the house,” he says.

Rosen reports that the Ministry of the Interior recently warned women not to go out on their own. Sheikh Salah Muzidin recently said, “It is the Islamic duty of woman to stay in their homes, looking after children and husbands, rather than searching for work—especially with the current lack of security.”

After hearing the young refugee’s devastating stories, I can’t bring myself to question him about the intensifying “cultural” restrictions on Iraqi women. Is his father’s “revolution” being continued by today’s imams urging men to keep women at home? If he relocates to his homeland, would he enforce or challenge the restrictions on women’s lives? He has a bit of the serious demeanor of a hard-line Islamic student yet exudes a sensitivity that serves as a counterweight.

In August 2004, in excruciating detail, Riverbend described how “a prominent electrical engineer (one of the smartest females in the country) named Henna Aziz was assassinated in front of her family—two daughters and her husband. She was threatened by some fundamentalists from Badir’s Army and told to stay at home because she was a woman, she shouldn’t be in charge. She refused … They came to her house one evening: men with machine-guns, broke in and opened fire. She wasn’t the first, she won’t be the last.”

Riverbend’s words written this February reverberate through me in an almost physical way: “I try not to dwell on the results [of the election] too much—the fact that Shia religious fundamentalists are currently in power—because when I do, I’m filled with this sort of chill that leaves in its wake a feeling of quiet terror. It’s like when the electricity goes out suddenly and you’re plunged into a deep, quiet, almost tangible darkness- you try not to focus too intently on the subtle noises and movements around you because the unseen possibilities will drive you mad …”

The young man went to Chicago to vote in the Iraqi elections. “We got what we wanted but the Iraqi government is weak. The U.S wants it to be weak so they can stay,” he stumbles, trailing off. “Without a strong Iraqi army or strong police … they won’t ask the Americans to leave …”

July 9, in what is being called the Jihad Quarter Massacre, militia murdered about 60 Sunnis, including Riverbend’s male friend, T, a 26-year-old civil engineer, who regularly e-mailed her jokes. Riverbend writes:

“I feel like I’ve given the traditional words of condolences a thousand times these last few months, ‘Baqiya ib hayatkum … Akhir il ahzan …’ or ‘May this be the last of your sorrows.’ Except they are empty words because even as we say them, we know that in today’s Iraq any sorrow—no matter how great—will not be the last.”

I wonder what the young refugee is seeing now on his seventh trip back to Iraq. It’s reported that her British publisher may help Riverbend leave the country.