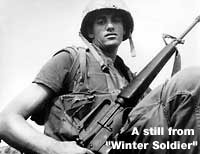 Jennifer Nemo recently sat down with Scott Camil to chat about his part in the Winter Soldier Investigation, being in the film Winter Soldier (see Pulse article “Winter Solider: The Horror”), and the situation today in the Iraq War. Camil is a decorated Marine and Vietnam veteran who attended school at the University of Florida after serving during the Vietnam War. At UF, Camil became involved in the student protest movement, and then assumed a leadership role in Vietnam Veterans Against the War.

What was it like participating in the Winter Soldier Investigation and being filmed?

Well, I went to the Winter Soldier Investigations without any knowledge of the anti-war movement and it was at the investigation where my thoughts about the war changed from supporting the war to working against the war. I had gone to the investigation because I believed what Jane Fonda said about the American government lying to the public about the war, and that it was the duty of Vietnam Veterans to tell the public about what was being done in their name as Americans with their money supporting the war.

I sat on a panel and they asked us questions. I answered the questions. The public seemed pretty surprised about the stuff we spoke about. To us it was just stuff that we were doing. One of the hardest things for me was not having an understanding that the public didn’t have an understanding of what happened in Vietnam. Having spent 20 months in Vietnam, I just thought everybody knew what I knew. I didn’t realize that the public didn’t have a handle on things happening over there, such as free fire zones, search and destroy operations, measuring success by body count and those kinds of official policies.

In the film you spoke about what motivated you to enlist in the war?

I grew up in a working class family. I’m the first one in my family to go to college and I did that on the G.I. Bill. I was raised to believe that we live in the best country in the world. And that it was our duty as males to serve in the military after graduation from high school. So I went in on the delayed enlistment program that allowed me to join the Marine Core with friends from high school to serve our country.

What was your experience like when you first went to Vietnam?

It was strange at first when I got off the plan and there was no shooting going on. Getting to the unit, people asked me where I was from. I told them I was from Florida and they introduced me to a guy, Terry Maine who was from Jacksonville, who became my best friend. And because I was a new guy in my unit, I was put on guard duty for 30 days and we were guarding an artillery base. On my third week there, Viet Cong zappers overran us and the base was destroyed. My friend Terry was killed – we had 5 Marines killed and 28 wounded out of the 90 of us. And the base was destroyed. When I saw the dead Vietnamese it made me really angry because they were South Vietnamese and I though that we were coming over to Vietnam to help them. And I thought, ‘why were they killing us [then]?’

And when I saw my friend Terry, the first person whom I had befriended weeks earlier in Vietnam killed, the reality of war really struck me. And I realized that it wasn’t going to be as much fun as it seemed like in movies and television – that this was really serious stuff and that I was in a place where it was people’s job to kill me and that they were allowed to do that. And, that if I made any mistakes, I couldn’t say ‘time out’ or ‘give me another chance,’ and that I could just be dead. So I made the decision that day, that I would just be ruthless and I would have no sympathy for the enemy and just kill as many Vietnamese as I could – that it wouldn’t matter to me what their age or their gender. I believed at that time that the life of one Marine was worth more than the lives of all the Vietnamese in North and South Vietnam together.

Since we couldn’t tell who the ones that were opposed to us were from the ones that were friendly, we just killed them all because that was the safest thing to do. And I think that what people need to understand is that once you’re in war, your life is on the line and you realize that when you realize your life is on the line you’re going to do whatever you think is necessary to stay alive.

And the whole focus becomes “staying alive” and politics are no longer involved at this point.

You bring up an interesting point there. In the film you are sitting on the panel with other Vietnam Veterans who’ve returned like you sharing similar experiences. How much of an impact did that have?

For me it had a tremendous impact. When I went there I supported the war. And when I left I had decided I would be against the war, and that’s when I joined the Vietnam Veterans Against the War (VVAW) and that I would work against the war.

That change in me – that process – took place over the three days at the Winter Soldier Investigations and I would have to give the final thing that really pushed me over was the questions asked to me by the Winter film’s independent filmmakers who asked me questions like “what did you think when you were doing this?” and I hadn’t really thought about those things before. And uh, they made me look at myself a little bit more in-depth; look at what I had done and what I had become. Once I saw through their eyes what I had become, I realized that I had really been the ‘bad guy’ and not the good guy and uh, I knew I was definitely going to change and work for the ending of the war in Vietnam.

[Answer to a question posed to Camil by Paul Bachleitner during Nemo’s radio film show]
The only differences I see between Vietnam and Iraq the last three years – the place where they are and the time in history. I think everything else is the same: both wars were started by lies, whether it was the Gulf of Tonkin Resolution or the Weapons of Mass Destruction. There was never really a plan on how to win. And in both wars, the borders were never secure. You took territory and as long as you stood on it – it was yours. But as soon as you left it was taken back over by the people who lived in the country.

I think one of the biggest crimes is that Congress was derelict in its duty and turned over all if its power to the Executive Branch of the government. In both wars the majority of causalities are from mines and booby traps and what they call in Iraq, “I.E.D.s.”

So I think that there are a tremendous amount of similarities between the two wars.

How did your experience as a participant in the Winter Soldier Investigation influence the work you do with anti-war organizations and also as an active military G.I. counselor now?

When I was in the war I experienced a lot of dumb things, and a lot of things that I didn’t like. Now as a G.I. counselor we have services to help young people who are in the military, who don’t know what to do about the situations they encounter as new recruits, which they consider to be improper or a violation of promises made to them by their recruiters, for example.

Last year the G.I. Rights Hotline took 32,000 calls. I’d say the majority of the calls that I taken this year, personally, have been with people who have been misled by recruiters. They were promised things that they didn’t get, or they feel they’ve been tricked or lied to, to get them enrolled into the military, and they want some kind of fair play.

In your role, how do you help the callers?

What would you like for people to get out of this film?

I think what’s really important is that people have to understand about the nature of war. In the film they may hear about things they don’t normally like. But those are all elements of war. And if you don’t like that kind of behavior you need to do something about that main institution that this behavior comes out of. And they have to understand that people come home with a lot of psychological scars and problems that are invisible, and those scars have a lot to do with how veterans interact with their families, their co-workers and their friends and with society. It is really important to understand that war is such a damaging institution, and that we should become truly civilized and not use organized murder, which is all that war really is.