We entered from the door at the back of the house, away from the busy street, through a kitchen into a carpeted living room which has the shrine and is the main space for services. When we arrived, a mother and daughter were seated on the floor in front of the monk who was leading them in prayer.

The house was purchased by the local Karen community four years ago. Monk Yatha, the resident monk has been here about four years. I spoke with him through my interpreter Miss Ahmay Ya.

Yatha became a Buddhist when he was about eleven year’s old, living in a village in Karen state in southern Burma. Although many Karen are Baptists, in his village all the families were Buddhists. He described two stages to becoming a monk.

From eleven to nineteen he learned ten major principles of Buddhism, then at nineteen, he moved to a second level, with 227 Buddhist rules and responsibilities. He has been a monk for about forty years. He described the core of Buddhism as helping a person develop a good inner character.

Yatha said that it is difficult for Karen families in Minnesota to visit the temple.

“Everyone is working so hard here, just to survive, whereas back in the villages, people had more time to visit the temples.”

We talked about how the people need the help of the monk at different parts of the life cycle, birth, marriages and death. The Karen Buddhists want their dead to be cremated, and their ashes sprinkled on the waters and rivers. He described a ritual he performs, shaking pieces of bamboo into a woven box with a net.

If the pieces of the tree pass through the net then the spirit is passing on. If pieces get caught in the net, then the soul is having a harder time leaving.

Yatha talked to me about the sadness of life for the Karen ethnic minority in Burma, after the crushed demonstrations of eight four (1984). He himself had been imprisoned by the Burmese military, tortured, suffered being badly beaten on the head, and teeth broken.

“My goal and hope is for Karen youth to become steady in their culture, of good character, strong in Buddhism.”

I asked Monk Yatha what his hopes were for the Karen children growing up here in Minnesota. He said that his goal is to provide them with the strength of character from Buddhism, to help them with beliefs and practices. He said that ideally a temple would be located out in the country away from the city. He hopes that in time his community will find such a space.

Our visit ended with prayers and a blessing. I asked Monk Yatha to say a few words to Ahmay Ya to help her have courage in her efforts to secure the release of her father, a leader of the Karen people, now serving a long prison sentence in Burma. I felt honored (and surprised)to be the first non-Karen person who had visited the temple. 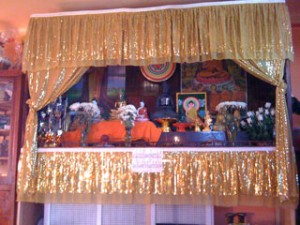 Monk Yatha invites interested people to stop by the temple, visit, join in prayers, and meditate. There are few parking spots around the house, so visitors may need to park on the side streets, and then enter from the back alley, crossing a small grass area which in summer is used for special events.

It is our hope in writing this article to raise awareness about the Karen Buddhist newcomers to Minnesota. Offers of support are welcome. Although, Monk Yatha has limited English, people can call the temple and other English speaking Karen in the building might be able to answer in English.