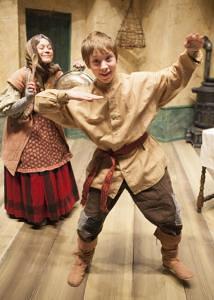 TC Jewfolk sat down with playwright and TC Jewfolk writer Jenna Zark to talk about her new play The Chanukah Guest, now being performed at the Minnesota Jewish Theatre Company.

TC Jewfolk: What drew you to adapting The Chanukah Guest, a children’s book into a play for the MJTC?

Jenna Zark: Well, first because Barbara Brooks (the artistic director of the company) asked me. She had two possible stories; one was a book called The Flying Latke and the other was The Chanukah Guest by Eric Kimmel. I had already adapted Kimmel’s book The Magic Dreidels and love the way he writes—and was immediately taken with The Chanukah Guest as soon as I read it.

JZ: He writes for children, but he doesn’t write down to them. When my son was in pre-school I discovered Hershel and the Hanukkah Goblins and thought, this is what a children’s book should be! My son was captivated by the story and wanted me to read it over and over again. I think we both loved it because Kimmel puts the story first–and then creates such full-bodied characters. Even and especially the goblins are fully realized and alive—which isn’t something you see in most children’s picture books.

TCJ: What interested you most about this particular story?

JZ: I’d have to say it was the woman at the heart of the story, Bubba Brayna. She’s not blind or deaf, but she can’t see or hear as well as she used to. Yet the entire village is still descending on her every Chanukah because she makes the most delicious latkes they ever tasted.

I love that an older adult is the lead character, because I don’t think we value older adults as much as we should. They are generous, tolerant listeners, great storytellers and they give us the benefit of their talent and experience every day.

JZ: Let’s just say it’s a surprise visitor that is the very last thing anyone would expect on the first night of Chanukah. And the visit itself reveals a lot about who Bubba Brayna is, what she wants, and how her community sees her. And of course, how Chanukah can bring people together.

Q: Who are the other characters, besides the Chanukah guest?

TCJ: Anything else you’re working on, now this play is finished?

The Chanukah Guest is playing now through next Sunday at the Minnesota Jewish Theater Company. Find showtime and ticket information by visiting their website.

Blogs Bradley Machov, TC Jewfolk
Do NOT follow this link or you will be banned from the site!
X