Joanne Hager is a happy woman. Even with concrete dust covering her halo of blonde hair, her face, arms and clothes, Hager’s dazzling smile conveys happiness. It wasn’t always like that.

Five years ago, Hager was working part-time as a home health aide, making $10-$15 an hour with no benefits.

“I had stringy hair, I was missing a front tooth and I had ballooned up to 270 pounds,” she says. She had no self-esteem. But that was before Summit Academy OIC.

SAOIC is a nonprofit training center that has been preparing adults in low-income neighborhoods for the world of work since 1996. It offers training in the construction trades and for being a certified nursing assistant and a community health worker, providing opportunities for those who are unemployed, underemployed and ex-offenders.

And if times were hard for Joanne Hager, they are even tougher today for African-Americans struggling to enter or re-enter the work force — especially those residing in the Twin Cities. The employment gap between blacks and whites here is the worst in the nation, according to the Economic Policy Institute, and has been for at least two years. Unemployment among blacks was 17.7 percent in 2011, 3.1 times higher than white joblessness. In 2008, early in the economic downturn, unemployment among blacks was 14 percent compared to 4 percent for their white counterparts, said Louis King, SAOIC president. 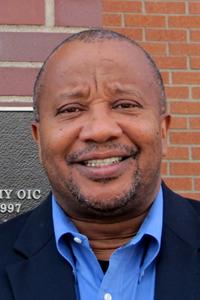 “We are in such an overwhelmingly white culture that social networks function independent of people of color,” King said. “By 2035, 50 percent of Ramsey County, 40 percent of Minneapolis and 30 percent statewide will be people of color. By then what we now call ‘nice’ and ‘the right thing to do’ will become necessary. We need to focus now on policies and practices that will allow this region to meet the challenges of the future.”

As King is fond of saying, “The best social service program in the world is a job.”

Walking through the sprawling SAOIC building at 935 Olson Memorial Highway in Minneapolis, you’ll see students engaged in the classroom preparation that makes up the first 10 weeks of the 20-week program. Follow the sound of buzz saws and hammers out back to where the hard-hat-clad second-phase students are engaged in practical training. Here, students practice building and tear-down on 1,000-square-foot houses.

Most recently, they began building 600-square-foot cabins that will find their way to various state parks as rental units. This is a new collaboration with Hennepin County and the Department of Natural Resources, said Steve Shedivy, SAOIC director of marketing and communications. Those training in health care spend their second week in various internships to attain practical experience.

SAOIC runs five 20-week programs a year, and enrollment has skyrocketed from 237 students in 2006 to 505 this year, Shedivy said.

Angela Norby, 22, of Hopkins and Eric Washington, 31, of Minneapolis are working toward their Sept. 7 graduation, both anticipating the day they walk onto their first work site. Both are hoping for work on the new Vikings stadium.

Washington is an ex-offender, having served 10 years in prison for bank robbery. Hailing from tough south central Los Angeles, Washington earned his GED in prison and began work on heating and air conditioning certification. Moving to Minnesota after his prison term to be near relatives, “I heard about [SAOIC] from a couple of guys in the halfway house with me who were already in the program. It was right up my alley to help me become a successful person, do something positive.”

Washington has an uncle in Florida who owns his own construction company, and he hopes to join him as soon as the residential market improves. He has nothing but good things to say about SAOIC. “This school is willing to help you as much as you’re willing to help yourself.”

Norby, the single mom of a 3-year-old son, was working in the fast-food industry before coming to SAOIC. In addition to her pre-apprentice certification that she’ll earn in about three weeks, Norby plans to return for the heavy-equipment training offered once a year. The training for traditionally male jobs appeals to Norby for a couple of reasons: her temperament and the high rate of pay.

“My dad used to take things apart just to put ‘em back together, and I always fell in line with my dad. They love to tell the story about when I put a carburetor back together when I was 3.” Also, having gotten into trouble committing credit-card fraud, “I still owe some restitution. I just want to get home at the end of the day and know I’ve earned my money.”

Joanne Hager feels the same way. A journeyman laborer, Hager’s work is hard, but it earns her a generous wage — $28 an hour, to be exact. Down 70 pounds, with a flattering short haircut and perfect teeth, Hager is about as happy as she can remember being.

“I just feel so good about myself. I feel so vital. My husband says the dirtier I am when I get home, the happier I seem to be. I’ve always been a tomboy, always been strong. Now I’m able to use my strength. What I do doesn’t sound like a craft, but it is. I know my job won’t disappear. No machine can replace me.”

‘I helped install the bleachers!’

And there is pride in accomplishment. Hager beams when she says, “I helped install the bleachers at Gopher Stadium!” Despite the hard work she does every day, Hager has energy left over to install a deck on her home and of course, spend time with her husband and 10-year-old daughter, Amelia. “To her, having an active mom means the world.”

“I’m extremely grateful to Summit Academy,” Hager says. “Today our home is paid off, if the kids need help we can help them, and I just bought a 2008 Toyota Solera convertible. I never had a nice car before.

“Bottom line: Summit Academy changed my life and with it, the life of my family.”