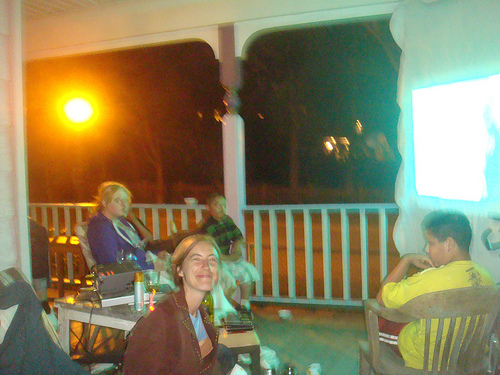 Movie night -- I felt there was a growing disconnect in our neighborhood. I started a weekend movie night, thinking that would create a literal focus on the corner and possibly connect with the neighborhood. We've been having movie nights since last summer.
Photo and commentary by Sage Holben in Dayton's Bluff, St. Paul

The Alliance is hosting the photography contest as part of their 15th year celebration, in order to document their achievements as well as highlight issues community members believe still need work within the Twin Cities area. The photo contest’s prompt, which was simply “Original images that display your ideas about what metropolitan stability and instability look like,” elicited 54 entries and produced a collection showcasing the power of perspective.

Unfortunately it’s too late to submit your own photographs, but its not too late to participate. In true Alliance of Metropolitan Stability style the community itself will be the judge of the contest, even you! The deadline to vote is October 2nd and voting is simple and easy, just follow this link to view the photos and vote. So take a couple minutes and let the Alliance of Metropolitan Stability know which photographers exemplified your idea of urban stability and instability.

“In/stability” marks the first photo contest for the Alliance for Metropolitan Stability, which often works by hosting speakers and community discussions. Though they are not an arts organization, the Director of Development and Communications Tracy Babler said on the phone that they were “looking for a different perspective from the community itself.” Through this new medium the Alliance is hoping to create and support community dialogue, as part of their mission “to advance racial, economic and environmental justice in the way growth and development happens in the Twin Cities metropolitan area.”

Terry Bebertz, whose photographs depict structures and buildings within the city, said, “Photography as a whole can express feelings people don’t know they have.”

The passion of the artists and the passion of the Alliance have been combined into a collection of celebration and contemplation. From specific community issues to stability as a concept, the images are diverse and creative, much like the communities that appear in the photographs.