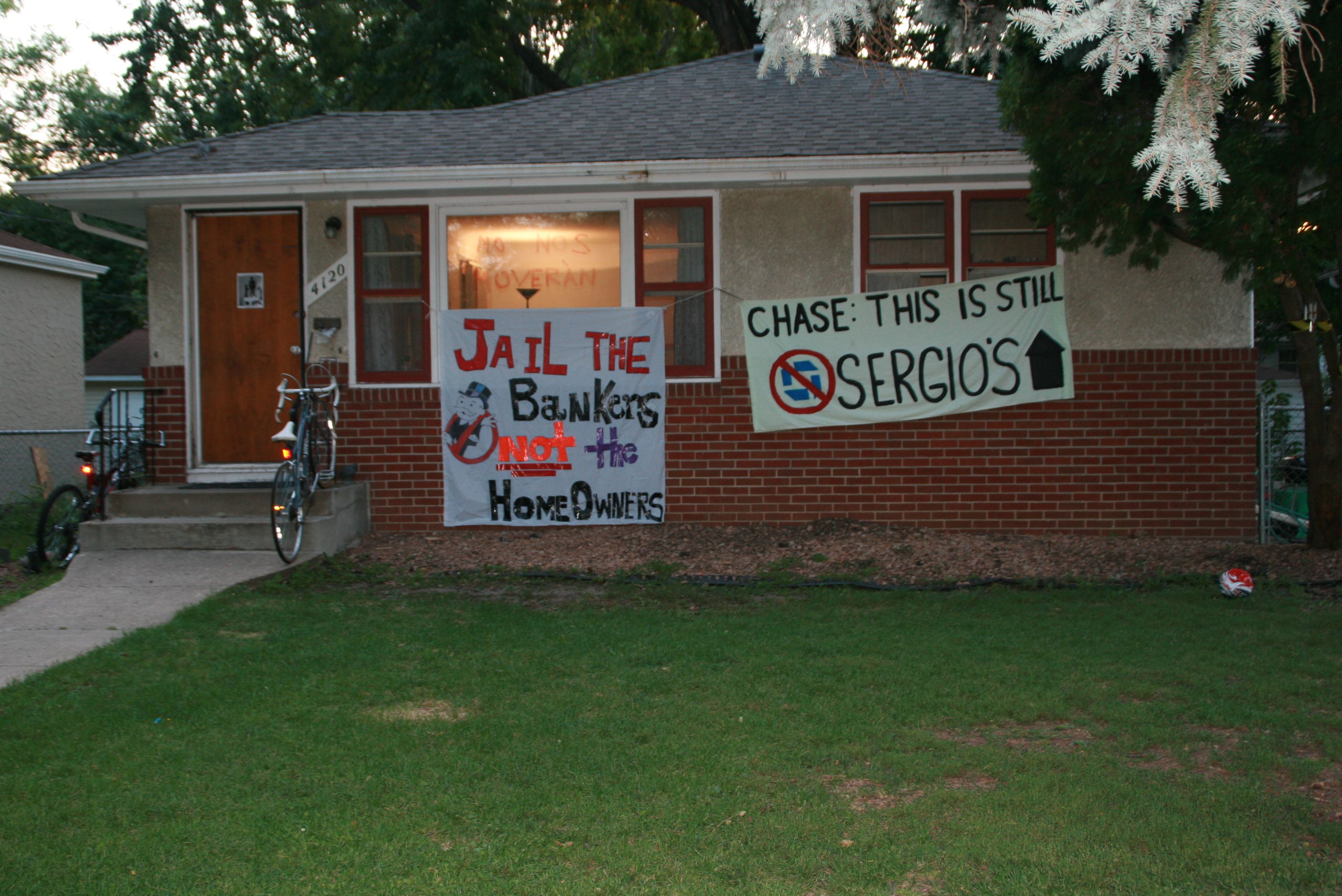 Foreclosures are down significantly in the Twin Cities. In the metro area, foreclosure rates dropped 33 percent during the last year, indicating a strong housing recovery fueled by a mending economy and changes in banking laws. But for those whose homes have already been seized, these statistics aren’t much help. The laws still favor the banks and so far, getting many banks to negotiate in good faith isn’t easy. When you’re facing foreclosure, having people who can help you fight back sometimes makes all the difference.

That’s why Sergio Ceballos and his family called on Occupy Homes, a local branch of the Occupy movement that works to stop foreclosures. The Ceballos home is at 4120 14th Ave. S. in the Minneapolis Bancroft neighborhood. The 1,500 sq. ft. mid-century rambler sold a little more than a dozen years ago for $162,000. Now, instead of being owned by the family, the name on the tax records reads “JP Morgan Chase Bank, NA.” This is not the only bank-owned house on the block. This neighborhood is still being hit hard by the housing crisis.

From the outside, it’s easy to tell that the family is part of a housing protest. Signs and banners proclaim “Jail the bankers, not the homeowners,” and “Chase: This (house) is still Sergio’s.” From the street, it looks quiet inside and it’s hard to tell that something important is going on the other side of the front door.

The home is guarded this night by a group of mostly college-aged men and women who are ready to fight for the Ceballos family home. “There’s always someone here,” said Becky Dernbach, who helps coordinate sit-ins like this one. “A lot of people come and go.”

Celeste Robinson a student at Macalester who was part of an effort to kick Wells Fargo Bank off her campus, sits on the floor of the living room. “We think we’ve made progress in keeping banks from cheating people,” she said. “The Obama administration is saying that the banks are too big to jail. There’s no way to hold them accountable. So, it’s up to us to hold them accountable.”

Jonathan Ceballos, the 21-year-old son of the homeowner is there to tell the family’s story. “We were told by Chase to send the paperwork for a loan modification by June 20,” he said. That was the same day the sheriff’s men came to evict them. “That means they had to file for eviction before the date they’d set for us to hand in our paperwork.”

This practice, known as dual tracking, where a mortgage lender will pretend to negotiate a refinance package with a homeowner while actually working to foreclose, was made illegal by the Minnesota Homeowner’s Bill of Rights, passed last legislative session. The ban on dual tracking, however, won’t go into effect until Halloween, October 31, too late for the Ceballos family.

“We took this before a judge and he wouldn’t allow us an advocate, or time to get a lawyer, or even a translator for my dad. It sucks to have to do this protest, but we do,” Ceballos said.

Banners proclaiming “The power of community is too big to fail” and a list of rules (they call them guidelines) are taped to a wall. There’s a wish list; food, toilet paper, toothpaste, a first-aid kit and a hand-held video camera among them. There are directions on home defense, since Occupy is expecting a repeat of what happened to them in late July.

On July 24, said Dernbach, 32 officers from the Hennepin County Sheriff circled the home, battered down the door and within minutes had boarded up house. One Occupy member locked herself down in a barrel (a large plastic barrel filled with cement.) They had to cut her out, said Dernbach. “We sent out mass texts and in 30 minutes we had 70 people.”

“The sheriff’s people left,” she said. “And the boards? Well, they just kind of came off the house. Since then, we haven’t had any trouble.”

Managing evictions, especially when met with resistance by groups like Occupy Homes, is expensive for the government, Dernbach explained. “At another Occupy house, the city spent $40,000 for a week to keep it empty. But we’ve had a meeting with the new police chief and we are cautiously hopeful we can work this out.”

While a sheriff’s raid can cause an adrenalin spike, most of the time spent in an Occupy home can be monotonous. To add a little fun to the experience and to keep people involved, the group organizes activities like informal karaoke nights in the basement family room.

“Last week someone brought a karaoke machine to one of our rallies,” said Robinson. “A lot of people joined in and everyone was singing together. Being here is fun, but it can get exhausting. We have to keep our energy up.”

A karaoke machine is set up and everyone has a suggestion for songs to sing.

There are no requests for protest songs, no rock or punk or rap. The consensus is for show tunes – something everyone knows. The first choice is Colors of the Wind from the movie Pocahontas.

After a few songs, group seems to want something to lift their spirits even higher. They pick an old song, choosing “Put on a Happy Face,” from Bye Bye Birdie, a 1960 musical that was a gentle, satirical jab at life in the 1950s, when the economy was strong and the national foreclosures rate stayed under one percent.

Locally, Occupy has had success keeping foreclosed families in their homes, getting banks to negotiate with the owners of 10 homes so far. They’re hoping, with a little help and some happy faces, they can make this house their eleventh win.

Singing to lift their spirits, supporters of Occupy try to harmonize.

A banner encourages members of the protest house.

Jonathan Ceballos says he's standing up for his family and their home.