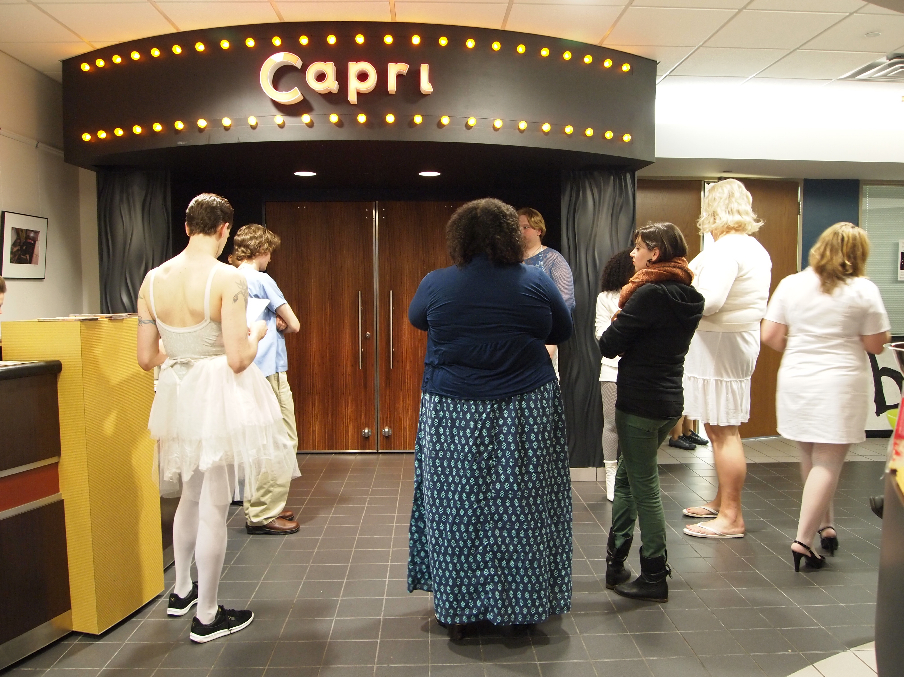 Some of the cast of "Nurses on Syrup" by Paige Collette (Set C), waiting to do their piece. The theater now lacks an adjacent green room, and while the Bedlam cast of 125 different actors and directors took that in stride, funds are being raised to put an addition on the theater.

Full disclosure: Call it embedded journalism, or shameless community boosting. Bedlam Theatre’s considering North Minneapolis among other communities for its new home, and many believe arts are key to economic turnaround. Not everyone understands or appreciates theater or performance art, and Bedlam is non-traditional within its genres, so I set out to understand what might be in store if they located here.

They said everyone who applied would be cast in some role, so I auditioned along with the Somali kids from Cedar Riverside and an assortment of others both professional and never before actors. Darrell Coles accepted me as the Voice of the Capri in his conversation Me and the Capri…and while many of the pieces playing this weekend were three months in the works, ours involved just a few sessions of tweaking Coles’ concept with Director Anton Jones. I contributed some visuals and personal history of the theater’s last decade, where his memories were mostly of the 1970s-1990s.

In short: Bedlam is at the Capri Theater at Oliver and Broadway for their tenth annual Ten Minute Play Festival, dubbed 10×10 FEST, and you’ve got to drop everything and run this weekend to see at least one set of plays. There are three sets, each covering 7, 8, or 9 of the concepts each in 10 minutes. It’s amazing what can actually be depicted in 10 minutes, and if you don’t think it’s working, there’s something new coming in short order.

Examples: Welcome to the Garden, by Anton Jones in collaboration with the ensemble, fuses the story of Stravinsky’s Firebird with the Adam and Eve story through ballet, burlesque, and hip-hop. It’s riveting and amusing as a serpent composed of provocatively-clad women holding techno-lit red apples messes with the hapless rumpled Tom Lloyd. (Set C)

In another garden, in the shed in The Glass House, Maren Ward as the daughter curses the dementia that’s pulling her mother away. As mother Annette Kurek describes it, “I’m losing my voice.” The variously-textured rainbow-colored clothing they each wear unify them, and they hug, but mother has to be reminded of Jan’s name. (Set A)

Anne Long, executive director of Plymouth Christian Youth Center, which owns and operates the Capri, told me the theater’s lighting and sound equipment is getting used in ways they’ve never realized it could be. It’s state of the art, and Bedlam’s using projection, strobe, and other techniques to bring texture and sound to unify and magnify the actors.

The theater’s drawback, its lack of adjacent off-stage space, doesn’t matter to the performers. They get a cue from the troupe three plays ahead of them that it’s time to get in position. That may mean going outside to the back of the stage, or lining up to burst through at the back of the audience.

Darrell and I have been particularly drawn to the people around “Only @ North” as it’s started conversations about the last 20-30 years history in North Minneapolis. Me and the Capri’s exploration of what happens when you abandon the community hub to go downtown to the shiny theater where “the white man’s ice was colder,” parallels what may have happened at North High and throughout the community.

The Only @ North piece changes from night to night as different cast members, all teens from North, show up and decide what to do. The show I saw on Thursday was much more organized and positive for educational goals than the squirreliness of Wednesday. Both performances were dedicated to the memory of North High staffer Kristopher Miller, a dean of students, who was killed earlier this week.

There are all sorts of conversations on various topics that have happened as the 125 cast and crew, people with or without Northside ties, who are involved in the 10×10 FEST bump into each other and their fans. There’s lots of hugging. Lots of learning about other cultures â€“ which sounds trite, but to explain everything I’ve learned would take too long.

I’m looking forward to catching Set B and the rest of Set C sometime this weekend. I saw Rhiana Yazzie’s 2012 The Musical about two women wondering what the new year will bring when an elder predicts Indian ancestors will come back from the stars with a message (Set A) and I’m curious to see what she’s done with Happy Somali Man in Set B.

I also want to see Talkback: The Talkback by Josef Evans, which allegedly pokes fun at both contemporary representative democracy and theatrical audience participation. For anyone who thinks organized theater is “too highbrow” as Darrell Coles accuses my Capri (Set A), Talkback and much else that we’ll bump into this weekend should shake that up a bit.