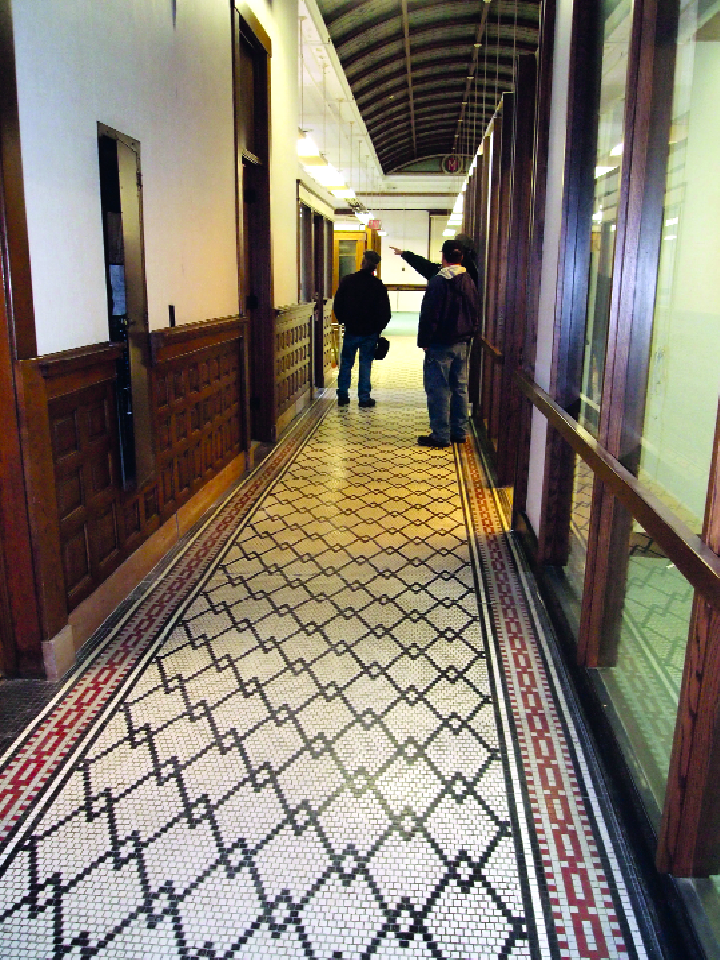 Looking from the oldest portion of the office building toward the new: Intricate tile patterns in excellent shape, and rich wood wainscot which (not in photo) curves to go up the stairs. The barrel ceiling was shingled over but was at one time a skylight. (Photos by Margo Ashmore)

It was a different, more diverse crowd touring the Grain Belt Brewery Office Building April 27, than the crowds that will gather in a couple of weeks to ask questions about the request for proposals to redevelop it. Happy Hour with a Preservationist brings out college architecture students, neighborhood people, architects and folks from across the city interested in preserving architecture.

They may be just the people who can encourage someone to submit the viable proposal; or, who knows, the key to the last two pieces of a 25-year puzzle might be in their midst. So City of Minneapolis staff hosted the tour at 1215-19 Marshall St. NE, ending at the Grain Belt Bottling House, 79 NE 13th Avenue, to show how that building turned out.

Proposers will have until Monday, Aug. 1, 4 p.m. to submit, and the City would like to see construction start September 2012.

To perhaps make it easier, the Request for Proposals (RFP) states that a proposer could address the office building or the vacant land next to it separately, or together; if separately, to expect to coordinate with the other parcel’s developer. It’s expected the land will hold housing in a multi-story building that nevertheless can’t block views of the historic brewery at 1224 Marshall St. NE. 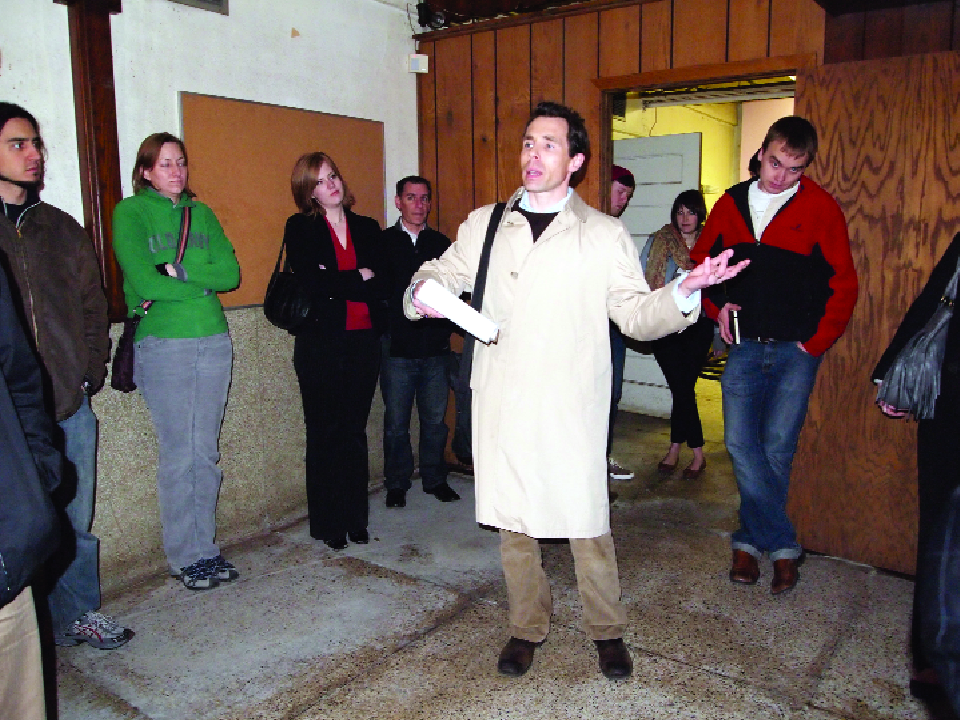 John Smoley shared a story in the Friendship Room, in the basement of the Grain Belt Office Building, where Minneapolis Brewing & Malting Company official Louis Findorf reportedly was celebrating his brother Rudolph’s 76th birthday when some gangsters robbed the office building June 6, 1941. The bandits scoured the rest of the building but never went downstairs. Findorf reportedly heard a gunshot but poured himself another beer. He explained to the local press, “If they weren’t going to come down and get it, I wasn’t going to rush upstairs and hand it over.”

John Smoley, city planner in preservation, guided the tour, and credits Jeff Lonto’s 1998 book, Legend of the Brewery: A Brief History of the Minneapolis Brewing Heritage for most of the information he shared, below.

John Orth, a French immigrant, opened Minnesota’s second oldest brewery on the now vacant land in 1850; the ruins of the old brewery were discovered and it was determined they must be preserved in a courtyard when the housing is built.

Orth died in 1887 and his sons took over, merging in 1890 with the Germania, Heinrich, and Norenburg brewing companies to form the Minneapolis Brewing and Malting Company; a move to be more competitive in a market being taken over by British investors.

While the operating facilities were mostly constructed in 1891, the office building followed in 1893. The company thrived and by 1910 they added on a 1.5 story 85-foot long addition with a gabled roof and leaded-glass barrel-shaped skylight over a mostly open space. The skylight is visible from inside, though it was shingled over at some point. There’s rain water damage where the old part meets new, and at other points in the building.

In the basement, there’s extensive water damage, Smoley said, from “insensitive grading around the building.” the bank next door sits a lot higher than the office building.

“The City is especially proud to be the recipient of Legacy Amendment funds for the building. These are being used to abate water infiltration which has understandably occurred during the 35 years since the brewery closed.” They’re installing sump pumps, drain tile, and sloped surfaces around the building. 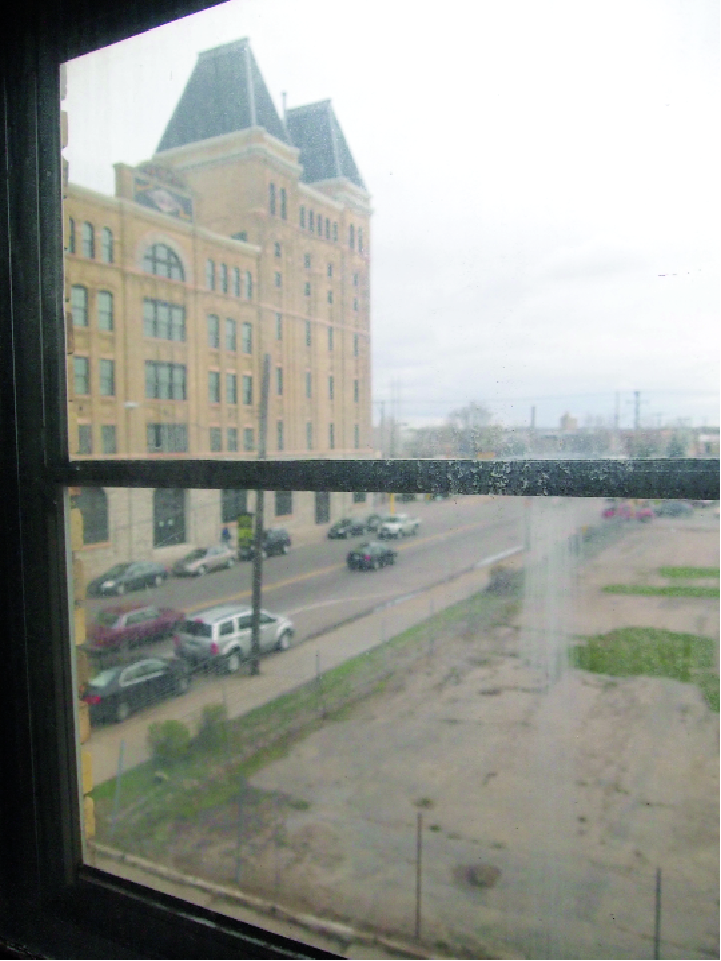 Left: The brewery building viewed from the second floor of the Grain Belt Office Building, where preservation-friendly folks took a tour. They remarked on the plush green carpet in an office suite, reported to have been Irwin Jacobs’, the local tycoon who presided over the last operation of the enterprise.

Smoley highlighted a number of ironies, for example: “In the early 1970s Grain Belt purchased the Hauenstein Company of New Ulm. Beer production moved to Minneapolis though the label still read, “New Ulm Beer. Schell’s Brewery of New Ulm owns the Grain Belt label, and production of this Minneapolis beer has been moved to New Ulm.”

In the 1930s, “labor unrest resulted in strikes and at least one major clash between picketers and strikebreakers in the late 1930s. This is interesting to note, in light of the fact that the IWW (Industrial Workers of the World), the Wobblies, began renting space at the Bottling House in 2009.”

The building was built by contractor Wolff and Lehle, their architect Carl F. Struck. It was designated historic locally in 1977 and placed on the National Register of Historic Places in 1990. The City has owned it since “around 1987.” As developers often do, the city placed some of their own staff, then called the Minneapolis Community Development Agency, in the building, “to show what can be done with it,” (overheard in the hallway during the tour). But even that went by the wayside eventually. The building is now vacant, though heated during the winter.

The RFP notes that the Above the Falls Plan, which is under review but not expected to change with respect to the building and land, calls for new housing at the site. The city expects to issue an RFP in 2012 or 2013 for housing development where Sheridan Development Company lost its development rights at the end of 2006; and offers their plans in the appendices of the RFP.

If a developer is proposing to take on both sites and develop housing as rental, it’s to be built such that it can be converted to condos when the market improves.

The RFP discusses the current zoning and notes that zoning changes may or may not be supported. It also states that “Write-downs from [fair market value] are considered public financial assistance and may trigger other requirements for the projects, and are therefore discouraged.” The city is asking $1.4 million for the land parcel and $50,000 for the office building based on a current appraisal, though if the city manages to stretch its Legacy dollars to improve the building beyond what’s now planned (for example, if it can solve the roof water infiltration), the city will want a higher price for the office building.

The RFP states, “Reuses of the Office Building could include commercial, office, and/or retail, and possibly a microbrewery. A microbrewery would be an interesting use of the building given the area’s historic association with breweries. However, RFP respondents should be advised that a microbrewery use could create zoning issues since the current zoning code does not reflect recent trends in the industry. Under current rules, a small brewing operation would be limited to 1,200 square feel in the C1 District as a conditional use permit under the category of ‘limited production and processing’.”

In addition to the developer site visits and information meeting, questions and answers submitted electronically (no phone calls allowed) will be posted online for all potential respondents to see, with the last questions due 4 p.m. Friday, July 1.