The post was from one of her then Facebook friends, whose screen name is Joseph Klimax. Lucio knows Joseph Klimax by his real name, Joseph Klimmek. Klimmek is a veteran police officer with the 1st District of the Minneapolis Police Department. The post was to a link of a Fox 9 story on a murder in south Minneapolis. Klimmek weighed in with by posting, “3(sic) murders in 3(sic) days and it’s not even warm yet.” But it was the sentence that followed that sparked Lucio’s outrage.

“This could be a busy year finally,” is what followed Klimmek’s words about three Minneapolis killings within three days.

Lucio said she was stunned by what she read and even more stunned when other presumed Minneapolis police officers chimed in seemingly hoping for a “busy” year.

“I wanted to point out the fact that the police were literally looking forward to a busy year,” said Lucio. “They verified through conversation that they were looking forward to having something to do. My point was to bring this to light.”

Lucio said she could think of plenty of other activities to occupy an officer’s time besides hoping for a spike in murder and other violent crimes. 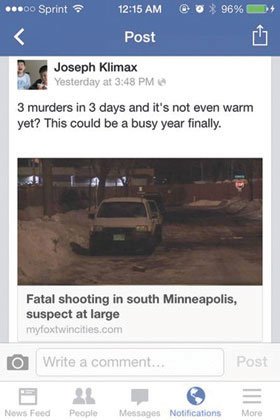 “If there is not enough to do, we need our officers in the community, being involved; gaining trust – not talking smack, judging, and creating an issue of trust across the community,” said Lucio. “It is comments like the ones the officers made that verify what fear I hear all the time. I personally have had very few police interactions. Not all were good; not all were bad, however, my friends are in constant conversation about being mistreated and judged (by Minneapolis police officers).”

Lucio said she reposted Klimmek’s comments to her personal page to ask her Facebook friends if she was being overly sensitive to the officers’ remarks. Several of Lucio’s social media friends suggested Lucio contact the media, which she did.

“The men and women (commenting in Klimmek’s post) were all calling (another woman who found the post offensive) and I ‘sensitive women’ and (said) that that’s why they were cops and we weren’t and that we didn’t have the right to judge them,” said Lucio. 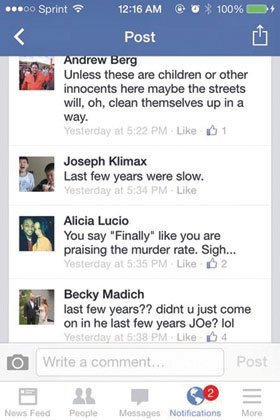 Though Klimmek is of Asian descent, Lucio, who is of Mexican heritage, said the posts and other posts on the officer’s page smacks of racism. In one post there is a drawing of a man behind prison bars next to a woman with five children and a dog and the caption reads, “If your husband isn’t there.” Klimmek followed that post with a picture that read “Meanwhile, on the Northside …” that depicted three men behind bars, a woman, five kids and a dog. The caption for that read simply, “Fixed.”

Lucio believes the officer’s Facebook posts demonstrate a culture of racism within the Minneapolis Police Department.

“Unfortunately, I do believe racist attitudes are common (within the department),” said Lucio, who herself did a little detective work on some of the people commenting on Klimmek’s insensitive post. “After looking up the officers’ names in the post, (many) had long misconduct records – most involving accusations of racism.”

One person, Jeffrey Jindra – presumed by Lucio to be Minneapolis Police Officer Jeffery Jindra – commented on Klimmek’s questionable post of wanting to be “busy” by offering an analogy of a heart surgeon only having to work on ingrown toenails and craving more action. When prodded on his analogy by a poster with a differing opinion, Jindra wrote, “Alright, if you are a rock dealer at Chi/Frank (presumed to reference the intersection of Chicago and Franklin Avenues) do you want to sell a pill to a Lone Geeker or do you want 14 people on the 1st of the month who just had their EBT card refreshed. (sic) Language you understand.”

Jindra was accused multiple times of misconduct, including a 2003 accusation that Jindra and another officer sodomized a suspect during a raid in north Minneapolis. Both officers were cleared of any wrongdoing in that incident by a U.S. Department of Justice investigation.

Because of the post and the subsequent media attention, an internal investigation into the incident has been launched by the Minneapolis Police Department. Department sources said the incident is being taken seriously, but citing the ongoing investigation, a department spokesperson declined to go into detail, but did offer a statement that read, “We are internally investigating the alleged Facebook post sent to us by a media outlet to see if it was, indeed, from an account of a Minneapolis Police Officer. The single post sent to us that was depicted in a recent news report certainly is not in line with the core values of the Minneapolis Police Department.” 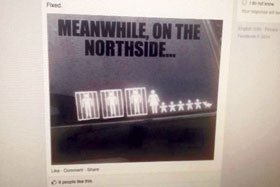 The morning following the questionable post on Klimmek’s page and apparently feeling the heat, Klimmek sent Lucio a private message in her inbox that asked Lucio to remove her screenshot of Klimmek’s initial post.

“That is only for friends. I don’t mind you seeing it and commenting on it but I don’t want it shared. Thanks. Joe,” wrote Klimmek.