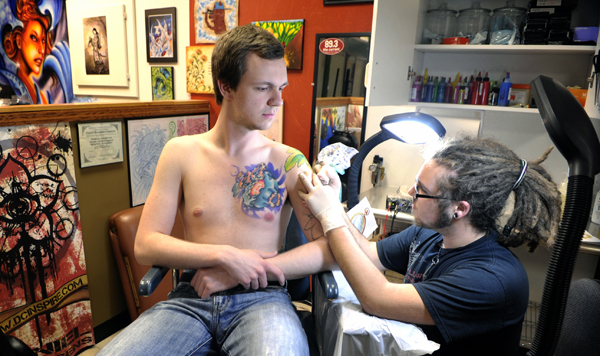 Call it another example of Minnesota nice: the Land of 10,000 Lakes is also home to tens of thousands of blood donors.

Nearly 120,000 Minnesotans gave blood last year through the American Red Cross, which runs one of two blood banks serving the state. Among Minnesota donors, about 7 percent give at least once every two years, up from the national average of 5 percent. And when supplies run short in other parts of the country, Midwestern blood often comes to the rescue.

But while Minnesota’s blood supply may be meeting today’s need, blood banks are avidly working to attract and retain new donors to ensure future reserves are just as strong. They’ve got several factors working against them, including an aging population and more restrictions on donor eligibility.

Recent collaboration among state lawmakers, blood banks and tattoo artists could help widen the donor pool. Sponsored by Rep. Julie Bunn (DFL-Lake Elmo), HF677 would create state regulations for body art – specifically, tattooing and piercing services. This state oversight was requested by local blood banks, which must otherwise temporarily defer potential donors with recent tattoos or piercings. The bill is supported by some body artists who would like to ensure safe practices across their industry.

Minnesota tattoo and piercing establishments are currently regulated under a fragmented system of county and municipal policies. The only statewide requirement is that a technician obtain written parental consent before providing tattoo or piercing services to a minor.

This lack of regulation ultimately works against blood banks, which follow donation standards set by the AABB, formerly the American Association of Blood Banks. Under these standards, anyone who undergoes “non-sterile skin penetration” must wait 12 months before he or she can donate blood. Someone whose body art was serviced by “a state-regulated entity with sterile needles and ink that has not been reused” is not subject to the 12-month deferral period.

Because none of Minnesota’s body art establishments are state-regulated, thousands of potential donors are deferred each year due to recent tattoos or piercings. Experts say those deferrals can be detrimental in the long run.

“Once a donor is deferred, even temporarily, they are much less likely to return,” said Dr. Jed Gorlin, medical director for Memorial Blood Centers. “This has particular impact when the donor is young.”

Young donors, it turns out, are in high demand. The first generation of blood donors gave during World War II and continued to donate throughout their lives, said Nick Gehrig, communications manager for the North Central Blood Services Region of the Red Cross. With fewer donations from this demographic, blood banks are trying to instill a similar life-long commitment in younger generations – where body art happens to be more common.

Bunn’s bill would provide the kind of assurance AABB needs to allow people with recent tattoos or piercings to donate blood immediately. Unlike a related bill that was voted down in committee last year, Bunn said her legislation avoids being “excessively regulatory” and sticks to “what is absolutely essential for health and safety.”

Under the bill, all body art establishments would need to be licensed by the Department of Health beginning in 2011, with the exception of those already licensed through similar county or municipal ordinances. Artists would be required to hold a tattoo technician license or a body piercing technician license; both would require the completion of at least 200 hours of supervised experience in the applicant’s field and completion of coursework in areas including bloodborne pathogens and infection control. After upfront costs to the state government special revenue fund in fiscal years 2011 through 2013, licensing fees would fund the oversight and inspection of establishments.

The bill also sets health and safety standards for body art procedures, including requiring the use of single-use needles and ink. In a change from current law, technicians would be prohibited from providing tattoo services to anyone under age 18, regardless of parental consent. Bunn said the language is intended to ensure that people who choose to get tattoos have done so based on their own decision-making and autonomy, not due to direction from parents or others.

The subdivision addressing minors is one of several provisions specifically requested by members of the body art community, some of whom collaborated on the bill. Unlike other licensing areas, tattoo and piercing technicians have fewer professional organizations and are harder to work with collectively, Bunn said. The ones she’s spoken with believe statewide regulations would add legitimacy and credibility to their profession.

“Most all of them already meet the standards in this bill and they want to make sure that everyone engaged in this work is doing it in a safe way,” Bunn said.

“I really don’t want that prejudice to return,” said Tanika Nolan of ACME Tattoo Co., Inc., in St. Paul, referring to past discrimination against the body arts. “We fought very hard to be mainstream.”