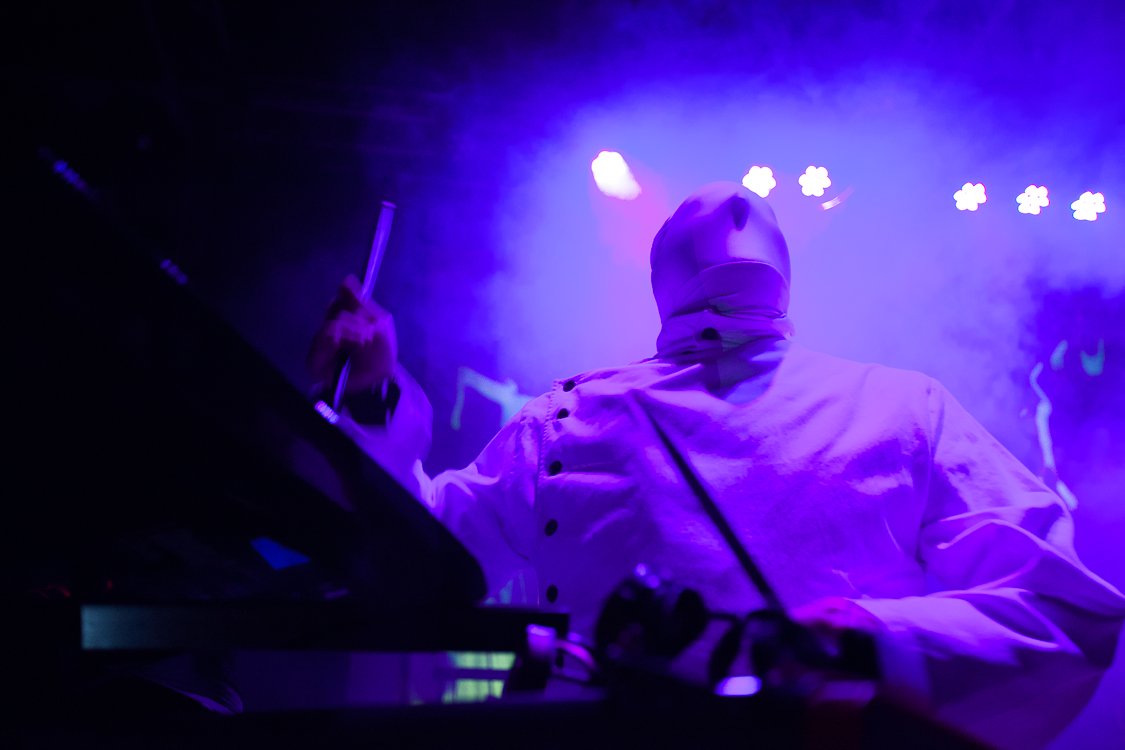 In the land of the blind, the one-eyed man is king

The crowd for Information Society‘s April 18 homecoming show at the Fine Line Music Cafe appeared to have been mostly in junior high and high school while InSoc was releasing the albums that made them a hit. DJ Jake Rudh began the evening with music and media designed to take us back to that time, when a handful of weird kids with samples and synthesizers could become a band and an enduring band at that. Stony-faced and ambitiously coiffed young musicians of thirty years ago shared the screen with Star Wars sequels and Daleks to create a 1980s just a bit better than the decade we actually grew up with.

When locals Dance Assault took the stage to open, the time warp was complete. While their music wasn’t derivative of any one band or even style from the era, its mix of New Wave, Disco-influenced electronica, and seduction rock would have made it perfectly at home on the radio in about 1983. A strong use of rhythm, particularly in transitions within the songs, had people dancing from the first few notes while avoiding the sense that we’d heard the whole thing before.

After Dance Assault, another local electronic band took the stage. Thought Thieves set themselves up for a challenge, as lead singer Mike Johnson tried to sell a suggestively creepy “I know what you want” song in a hoodie and carrying his drink in a plastic cup. It was a difficult sell, especially for the first song in a set. Still, the driving sound and musicianship meant a generally good reception from an audience that was getting impatient for the main act.

Information Society took the stage with a strong reminder of how a band that makes such classic pop electronica got themselves a reputation for being kind of odd. In this case, it was the Victorian surgical gowns with the coordinating full-head masks they wore to perform “The Prize”, one of several songs they played from their newest album, _Hello World.

The set list was a solid mix of old and new. While the evening was billed as a homecoming, new material held its own. _Hello World has a harder edge than anything InSoc recorded in the 80s or early 90s, but it otherwise fit right in with the classics. Their cover of Devo’s “Beautiful World” tied the two eras together nicely.

The night was for nostalgia in other ways as well. Bassist James Cassidy brought his sister onstage to sing backing vocals for “Mirrorshades” and kept recognizing (and mugging for) friends and family in the audience. Pamela Brustman, one of InSoc’s founding members, ended the evening by starting the sequencer for the encore. Lead singer Kurt Larson later hauled his mom up to embarrass them both by claiming she doesn’t like his music.

In fact, Larson’s fraught relationship with, well, just about everything provided much of the energy that drove the show. Whether it be the towel he used for wiping his face, the pressing question of which drumstick to use on his sample pad, his relationship with the tiny robot onstage, or the simple act of standing in front of a microphone to sing, Larson often appeared perplexed and dismayed by what he was expected to do. More than once, we saw him turned around singing into one of the back corners of the stage.

For all his fidgeting, though, Larson is a professional. It showed particularly in his voice, which hasn’t aged in the 30 years he’s been performing and recording. On classic InSoc songs and in an a capella takeoff of “Jack’s Lament” from The Nightmare Before Christmas (about Larson’s fraught relationship with fame and following his suggestion that his relationship with his peers in high school was also fraught), Larson demonstrated vocal training that many of his peers in early electronica lacked. His onstage awkwardness is part of the act.

Paul Robb spent less of the evening hamming it up than his bandmates, but even as the person who plays the majority of the music, he still found time to step away from the synthesizer every now and again. And his suit was a performance in itself.

It would be remiss to review the show without giving a shout-out to the onstage video. Whether it was the background of Black Lives Matter and “Je suis Charlie” for “Beautiful World” or the extended Leonard Nimoy tribute that prompted Vulcan salutes in the middle of “What’s on Your Mind”, the video always added to the songs it accompanied.

The show wasn’t perfect, with a few technical issues in the first couple of songs, but it was what InSoc does best. It was an odd night of solid music that has more than outlasted the era in which it was written. Aside from a few overzealous fans excited by the proximity afforded by the Fine Line, whom Larson reminded, “One, I can’t hear you. Two, I’m busy,” it was the kind of homecoming a band can be proud of.

Paul and James of Information Society

What's On Your Mind? (Pure Energy)