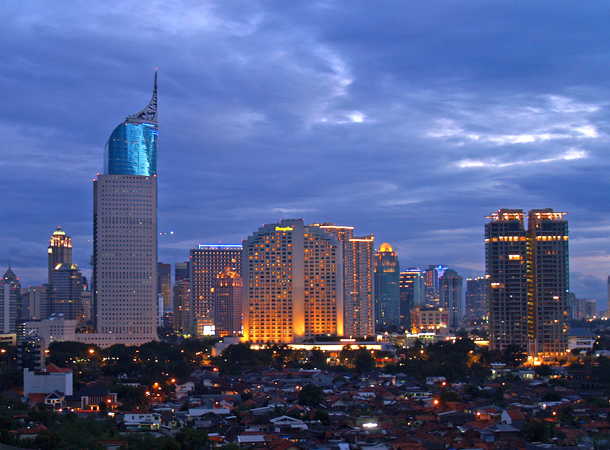 JAKARTA—I can now say I’ve had an Indonesian woman pull down my paper underwear and scrub my butt.

A three-hour “spa sampler” package at our hotel was about $100, so it seemed like (and was) the best idea ever after a round of 15-hour work days. My coworker Frank and I showed up at the spa for our body scrub, hydrotherapy, Indonesian massage, and pedicure. Never having had any of those services except a pedicure, I was as filled with curiosity as I was with dim sum from the breakfast buffet. I have no idea if hydrotherapy and body scrubs are like this in the U.S., but I’m now well-versed in Indonesian spa treatments and figured I should share the knowledge.

First we start with the scrub. Actually, we start with me in a little room with my…spa director, let’s call her. She tells me to undress and stands there expectantly. She then hands me a little roll of paper “underwear.” I put on the disposable underwear and start picturing way too many different people wearing something that looks like a shower cap for your butt. I lay face down on a big sheet of plastic wrap and the scrub is pretty much what you’d expect: a woman rubs scrubbing salts all over your body and crevices. It’s a bit surprising to have hands in places no one has ever scrubbed, but after the initial shock it’s rather relaxing and fabulous. To end the body scrub, I was directed to take a shower with my spa-ist standing there waiting. The result: my skin was as soft as baby lemur’s butt. (As a side note, if you want coffee that has been through a lemur, Indonesia’s the place.)

My next service was Indonesian massage, which is not like Thai massage where they try to bend you into pretzel shapes and almost pull your limbs off, but more like the massages most of us are probably used to. Frank told me afterwards that at one point his massuese/scrubber/hydrotherapist/pedicurist was sort of straddling and adjusting him and he started to worry that she might offer some kind of shenanigans, have an awkward miscommunication, and he might end up with who knows that. My masseuse, who is now known in my mind as The First Stranger to Massage My Breasts, did not try anything funny like that with me. The massage was very nice and very, very thorough.

When she was finished, she went to setup hydrotherapy, giving me time to not only wonder what that would entail, but also how I could ask her for yet another pair of disposable undies without her thinking I was some kind of paper panty addict. I wanted them for Alexandra who had asked me to bring her “the coolest thing I could find for free.” She came back to get me and led me into a room with a table and a big bath tub. She instructed me to get in so I got naked and hopped in the tub. Now, those of you who know me won’t be surprised that having some random woman scrub my breasts didn’t bother me in the slightest, but if she was about to get into the tub and start washing me, it was going straight to the top of my Bizarre Things That Have Happened to Nicky list. Thankfully she just turned on some jets and told me it would be 20 minutes and I should push the button to stop the jets if I got a headache. She was going to clean up the other room and would be back shortly to watch me take a bath.

Have you always been wondering what hydrotherapy is? Well, it’s simply you sitting in a tub with a bunch of jets massaging the skin off your entire body. It rotates between feet and leg jets, then butt and side jets, ending with back jets before cycling back. I think it goes through each about seven times. It also consists of—if you are sure you don’t have a headache—a lady massaging your shoulders while you sit in a tub. Then a woman puts your bathrobe on you (I could get used to that, actually), gives you a glass of water, and then, if you finally say maybe you don’t actually feel okay, lays you down on a bed asking if you want to “sleep.” If you look pallid and on the verge of fainting, she rubs your head and brings you ginger tea. Don’t forget that you’re mostly naked for all of this. Masseuse Lady (I really wish I could recall her name) saved my naked self from passing out, asked me where I was from, and told me I have a pretty face and look like maybe I’m from Iran. At this point I felt like we had shared something special.

After I recovered from almost getting another middle-of-the-face scar from fainting, it was time to trade in paper undies for real ones. While dressing, I tried to quickly steal a pair of fresh paper panties before she returned, but then gave up, resolved myself to asking her for them, and then found a little roll of undergarment sitting on the tray with the cotton swabs and comb! Success! I’m not going to tell you anything about a pedicure because you’ve either had one, or couldn’t care less what one entails. The only excitement in the pedicure room was Frank getting his feet dipped in hot wax and fearing they may come out hairless. I’d definitely spend a few hours at Le Spa again; my next service to try would be the body wrap. I’m imagining a well-mannered lady saying, “Excuse me, can I roll you up in this wet banana leaf?” The real question is: will I be wearing underwear while I’m in a human sushi roll?

The afternoon was lovely, but while on the scrubbing and rubbing table, I was trying to decide if this spa treatment made Jakarta better than Minneapolis. After working 15-20 hours a day for a week and a half, I barely got to see the city. It would take more than an all-you-can-eat ice cream buffet, a waiter who peels exotic fruits for me (and tells me what they’re called in English and Indonesian), and some exfoliation to make me want to stay. By the time I was released from Le Spa with an acceptable level of skin softness, I was quite happy to be heading out of Jakarta with one thing on my mind: Minneapolis.