Income inequalities between Minnesota’s richest and poorest families continue to widen and endanger the state’s future, according to a recent national report.

Pulling Apart: A State-by-State Analysis of Income Trends by the Center on Budget and Policy Priorities and the Economic Policy Institute found a significant increase in income inequality in the nation and in Minnesota from the late 1990s to the mid-2000s, when the earnings of high-income households grew while low- and middle-income households’ earnings fell.

This growing income inequality contradicts some of our country’s most deeply held values, according to a Minnesota Budget Project issue brief that provides more detail on the Minnesota situation. Americans believe that hard work should pay off, that people who work full time should be able to support their households, and that everyone should have the opportunity to succeed.

Some of the most disturbing findings: 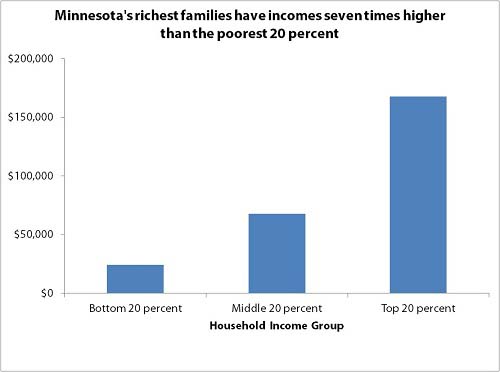 By investing the right resources in the right places, Minnesota can work to mitigate this trend and ensure that everyone has a chance to succeed. It’s the right thing to do for all of us.