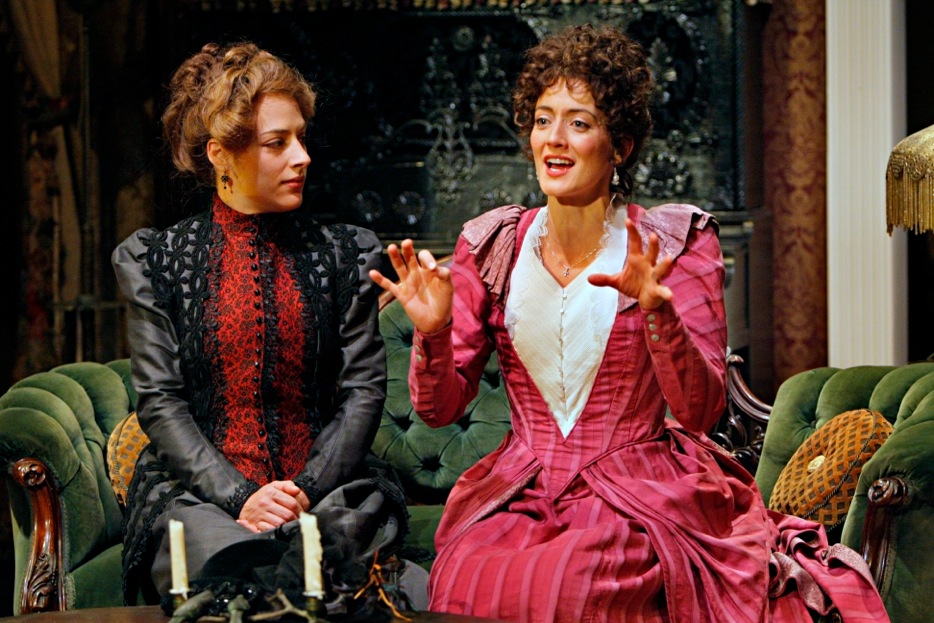 What a delightful play! I enjoy Sarah Ruhl’s writing, so I was prepared to enjoy In The Next Room at the Jungle Theater. Since it was a finalist for the 2010 Pulitzer Prize for Drama as well as a Tony nominee for Best Play, I was prepared for it to be impressive. I was unprepared for the way the play constantly thwarted and exceeded my expectations of it at the same time. It’s both hilarious and heartbreaking. Poetic and clinical. Romantic and inappropriate. Frequently all these things are colliding with each other in the same scene. It’s mesmerizing to watch and a joy to listen to. I’ve seen a lot of theater in 2012 but In The Next Room easily ranks right up there with the very best things I’ve seen all year.

“You keep her close to you. You remember the blood her milk comes from.”

In The Next Room is a play full of delicious contradictions. The basic outlines of the plot feel like they could be straight out of Ibsen, yet rather than being dark and brooding, the feeling is one of lightness and comedy. The subject matter is primed for audience titillation, yet the play has a bracing innocence about it. Rather than being about just about sex and stimulation, the play delves into the far richer and dangerous territory of intimacy and emotional bonds with a frankness and honesty I’ve rarely seen onstage. This is the kind of thing the connection between actors and audience in live theater does best. It’s the reason for theater’s resilience over the centuries. And it’s something In The Next Room does better than almost everything else I’ve seen this year.

“Without love, bodies are meat.  Meat and bone and levers and cavities.”

The story takes place in the home and office of Dr. Givings (John Middleton) and his wife Catherine (Christina Baldwin) in a prosperous spa town outside of New York City in the 1880s, after the Civil War, and just as electricity was coming into more common use. Dr. Givings treats women for hysteria. One method at the time of helping women to relax was to stimulate them to orgasm—not that this was the stated goal, or perceived as the least bit sexual or unusual by Dr. Givings, but that was the outcome of the procedure. The wonder of electricity, channeled through an early version of the vibrator, is Dr. Givings’s tool of choice. Sometimes manual stimulation may also be required, for which Dr. Givings calls upon his nurse Annie (Annie Enneking).

“It will record the last wishes of the dying.  A man may know the voice of his great-grandfather.”

One of Dr. Givings’s current patients is Sabrina Daldry (Emily Gunyou Halaas), a nervous and excitable woman brought to the doctor by her husband (Bradley Greenwald). The treatment, and Annie, work wonders for Sabrina’s peace of mind. Sabrina also strikes up an unlikely friendship with Catherine, and Mr. Daldry is equally charmed by the doctor’s wife. The Daldrys are able to help the Givings in return.

“You know what they say about wet nurses—nine parts devil, one part cow.”

Catherine is unable to produce enough milk for their newborn child Lottie. The Daldrys have a maid, Elizabeth (Austene Van), who recently lost a child of her own and is still producing milk. Elizabeth takes on the job of wet nurse for the Givings’ child, despite Catherine’s reservations. Catherine already feels she’s failing in her task as a new mother, and having a black woman nurse her baby makes her additionally uncomfortable.

“Hysteria is very rare in a man.  But then, he is an artist.”

There’s a lot going on here. In fact, the living room and the doctor’s office are next door to one another, and exist on the stage at the same time. Action frequently takes place in both locations at once. Yet the story is always easy to follow and moves nimbly along from one encounter to the next. Ruhl’s script assumes the audience is smart enough to keep up (and we are), and Sarah Rasmussen’s adroit direction keeps all the various elements of the tale percolating at just the right heat. The play was so much fun to watch, I almost resented the intermission. I wanted them to keep going. It’s been a long time since I looked forward to a second act with such eagerness.

“No smoke.  No odor.  A light without flame, without danger.”

The cast is wonderful from first to last. Each actor so fully inhabits his or her character that, even in the case of actors I know personally, I was completely submerged in the story and bought into their lives on stage as someone else entirely. No one overplays or “performs.” I grew to enjoy the company of these imaginary human beings and care very much what happened to them. As someone who sees and creates a lot of theater, I shouldn’t be so easily hoodwinked, but I couldn’t resist.

“It is women who are eaten, who turn their bodies into food.”

Often it’s the simplest moments that are the most bewitching. There are a couple of points in the play where Sabrina plays the piano (music composed by Jonathan Bell) while characters as diverse as Catherine, Elizabeth, and Annie are in the room, just listening. The tunes are both sad and beautiful. Watching the other characters process these melodies is fascinating. You can see the emotions pass across their faces and ultimately move them to respond. The simplicity of it is breathtaking to watch. The laughter is also plentiful throughout the play, and all the more enjoyable because of the strains of heartache running underneath the surface.

“If we have enough heavy objects, the house will not fly away.”

In The Next Room also looks like a million bucks, just as you’d expect from design work at the Jungle. Moria Sine Clinton’s costumes in particular are stunning to behold. The detail and precision on hand in everything from Jason Allen’s wigs to John Novak’s props to Sean Healey’s sound and Roberta Carlson’s additional music are spot-on, and the final transformation of the stage from inside to outside with Bain Boehlke’s set and Barry Browning’s lights is magical indeed. The falling snow and the army of snow-covered trees appearing in the moonlight are quite lovely.

“While lips were willing, free and soft, I kissed them.”

In a strange way, it’s a perfect holiday show. Not for the children, certainly—but In The Next Room is in many ways a fairy tale for adults, a love story between husband and wife, friends, parents and children. Love is ultimately the one thing that saves all these characters from coming apart at the seams. Not all love is returned, nor should it be; but the longing for connection, for intimacy, for something deeper than the surface niceties of everyday life, that powerful need binds the play and these people together. It’s an enormously satisfying story to watch unfold.

“How many times must we fall in love to get through the week?”

I feel a little sorry for any other theater I see in the next couple of weeks. After seeing In The Next Room, anything else has a very high bar to clear. There aren’t words to recommend this play highly enough. Productions like this are the reason we do theater. They prove theater still speaks to us.

Read reviews of other recent Jungle Theater productions: Waiting for Godot (reviewed by Bev Wolfe) and Noises Off (reviewed by Jay Gabler).