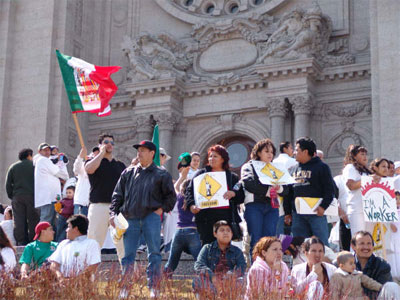 Over 30,000 people participated in an April 2006 immigrants’ rights march from the Cathedral of Saint Paul to the State Capitol in St. Paul.

CHICAGO—Twin Cities immigration activists joined more than 600 activists from around the country in suburban Chicago, August 11 and 12, for the National Immigrant Rights Strategy Convention.

The two-day meeting, which organizers explained was called to “Develop strategies and coordinate action to help advance immigrant rights.” voted to form the National Alliance for Immigrant Rights. The alliance will act as a structure to coordinate and focus activities directed towards winning legislation that will give residency to all immigrants who live and work in the U.S. without papers.

“I feel that we now have an instrument that will enable us to unify the movement and formulate a national strategy. This will allow us to have a greater impact,” said local immigrant rights activist Francisco Segovia, speaking about the decisions of the meeting to the Spokesman-Recorder. A delegation of about 20 people from Minnesota organized by the Minnesota Immigrant Rights Action Coalition attended the meeting.

The conference was convened by March 10th Movement, the Chicago-area coalition that organized two huge demonstrations in that city this past spring that drew hundreds of thousands of people into the streets in defense of immigrant rights.

Conference decisions
The convention adopted a number of points of unity, which included support for unconditional legalization for all, opposition to immigration legislation adopted by the House of Representatives last year (which would criminalize undocumented workers and those who aid them), opposition to the Senate version of the proposed law approved last May, and opposition to the militarization of the U.S.-Mexico border — including the construction of a proposed border wall.

In addition, the conference voted to adopt demands that called for expedited family reunification visas, protection of labor and civil rights for all, and an end to deportations and the use of local police agencies for immigration purposes.

The meeting resolved to support actions that have been called in a number of cities in connection with the Labor Day holiday. In addition, conferees adopted a call for nationally coordinated actions on September 30 to demand immediate and unconditional legalizations for all undocumented immigrants. The actions are timed to take place before Congress adjourns and mid-term congressional elections take place.

“I think it was really significant,” local delegate Brad Sigal told the Spokesman-Recorder. “It was a meeting of all the forces that support full legalization for immigrants and who are opposed to all of the proposed legislation before Congress.”

In an article in the Militant newspaper, immigrant rights activist and conference delegate Nativo Lopez was quoted as saying that “We reject any bill proposal that offers any less [than full legalization],” According to the article, Lopez, who is the director of Hermandad Mexicana and president of the Mexican American Political Association (MAPA) in Los Angeles, spoke on the panel titled, “We Are for Legalization for All, Nothing Less!”

The conference builds on the political momentum from the demonstrations for immigrant rights that erupted across the country this past spring. These actions — the largest demonstrations in U.S. history — drew millions of participants. Of particular significance was the work boycott and protest that took place on May 1. These work stoppages took on the character of a nationwide political general strike.

According to the same Militant article, conference attendee Nilda Flores-Gonzalez, a professor at the University of Illinois in Chicago, reported on numbers from a survey that highlighted working-class participation in the May 1 actions. According to the survey, 73 percent of the demonstrators were either full-time or part-time workers. It also showed that 72 percent of those who participated in the actions had missed work.

At one point in the meeting, several members from the Chicago Minuteman organization, a right wing anti-immigrant group, protested outside of the meeting, according to an article in the Chicago Tribune.

Local activities
In line with conference decisions, local organizers are planning a Labor Day march for immigrant rights, to take place on Monday, September 4. Marchers will assemble at the Neighborhood House community center located at 179 Robie Street East in St. Paul. From there the march will proceed through the neighboring West Side community and then return to the community center. where a rally will take place at Castillo Park.

“Now the challenge will be to incorporate other organizations into the movement,” said Segovia.

“Especially important to us are our African American brothers and sisters,” explained Segovia. “We suffer from the same kinds of problems — discrimination, police brutality, poverty and other ills. Our unity in struggle against these social injustices is of primary importance.”