Rodrigo Cala, who grew up farming in Mexico with his father and brothers, now combines techniques learned from his grandfather in Mexico with new methods he’s learned from Minnesota Food Association (MFA) training. He shared his knowledge of organic growing methods and soil, and demonstrated his crop rotation practices at the 5th annual Immigrant and Minority Farmers Conference, held at the Wilder Foundation in St. Paul on February 19 and 20.

Hmong, Somali, Latino and other immigrant farmers from throughout the state gathered to learn new growing techniques and business planning, as well as to network with other farmers and learn about opportunities available in the state. The conference was hosted by the USDA Farm Service Agency (FSA), the Minnesota Food Association (MFA), and the Association for the Advancement of Hmong Women (AAHWM).

Cala came to the United States in 2005. In 2008, Cala completed a three year farm training program with MFA. He  purchased a farm in Wisconsin, and now grows organic vegetables for retail markets. He was one of the farmer-experts at the conference.

Cala made a presentation on organic growing methods and soil. Cala demonstrated the way that he rotates his crops each year, growing as many as 20 different vegetables, depending of the market. Cala uses small beds, and makes his own compost.

He also said that the business training that he received through MFA was invaluable. “There are many different rules,” he said. “It took me three years to learn everything from A to Z.” He asked the experts, and in 2008 he had his dream come true, buying 46 acres of land with a house for $200,000. So far, Cala has been lucky, and each year the farm makes enough to go toward paying off the loan.

According to the conference brochure, its goal was to promote the success and viability of small and beginning minority and immigrant farmers. The agenda included presentations on soil nutrition, record keeping, and marketing as well as information about organic farming and Community Supported Agriculture (CSA) farms. In addition, there were two keynote addresses by Lee Pao Xiong, Director of the Center for Hmong Studies at Concordia University, who has been instrumental in encouraging Hmong farming in Minnesota, and State Senator Mee Moua. Translation services were available for a number of different languages throughout the conference.

In his keynote address, Lee Pao Xiong spoke of the thirty year process of strengthening support networks for Hmong farmers. He said that because many Hmong immigrants had been farmers in Laos before moving to the United States, farming here was a way to tap into that skill set for community betterment. Xiong said that in the past thirty years it has taken great energy to gain the support of federal and state agencies. With help along the way from such lawmakers as Sandy Pappas and Matt Entenza, Xiong said that Minnesota has grown into one of the most supportive states for immigrant farmers. Indeed, Xiong said that one of the reasons for having the annual immigrant conference is so that new farmers won’t have to go through the same struggles that Hmong farmers had to go through 30 years ago.

“We’re in search of new approaches and opportunities,” Xiong said. Some of those approaches include organic farming, and growing not just for family consumption but for commercial selling and exportation. “The world is our market,” Xiong said.

In order to succeed, Xiong said that Immigrant farmers should make sure to incorporate, Without the necessary paperwork, they won’t be able to get insurance, which is essential. Also, farmers need to do their research, know the markets, and know the land. He mentioned that one challenge is to know where potentially dangerous land is, such as areas near Lake Elmo, Cottage Grove, and Forest Lake, which have been contaminated by pollutants.

Another hurdle for immigrant farmers is language. “For Hmong people,” Xiong said, “The hill is much steeper,” because of the language. “But you are halfway there. When you get to the top, the view is much more beautiful.”

May Lee has lived in the United States since 1981 with her children and now grandchildren. In Laos, where she is from, she was a farmer, but when she moved to the U.S. she got work as a housekeeper. After over twenty years, she is now back to farming on a plot of land her daughter runs at Big River Farms CSA.

According to MFA’s website, Big River Farms is a program run based at Wilder Forest in the St.Croix River Valley. MFA trains immigrants and other aspiring farmers in Certified Organic production and assists them in developing their own local markets. 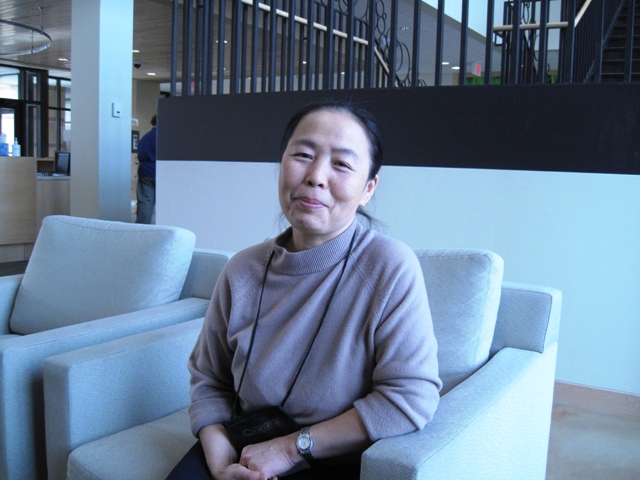 May Lee (Photo by Sheila Regan)

Lee said that her daughter, Mhonpaj, was working at a hospital and had studied health and nutrition. Mhonpaj decided to start a farm of her own and her mother has since quit housekeeping to help her. While Lee’s daughter runs the business end of the farm, Lee, with her knowledge of farming, teaches her daughter what she knows. They grow organic vegetables, without the use of fertilizers, on land they lease from MFA.

Lee said that much has changed since the days she grew up farming in Laos. “Here it is different because of the machines,” she said. She is amazed by how the tractor, the tiller and the hoe that you push, not pull make farming easier, although she sometimes can’t believe how much legal paperwork her daughter has to fill out in this country.

Moses Momanyi, from Kenya, also has a farm at Big River. He came to the United States in 2004 and says that Minnesota has a lot of support for immigrant farmers.

Momanyi runs his farm with his wife, and also has gotten a lot of help from his friends who enjoy working on the farm because it reminds them of the work back home. He said that there’s a delicate balance between growing his farm, but not growing it too big because he has to be able to manage it himself. Currently his main limitation is finding markets to buy the plants that he grows. He can only, after all, grow as much as he is able to sell. He hopes to one day buy land and have an orchard too. For Momanyi, whose children were born in the United States, planting his farm is a metaphor for the seeds he’s planting in this new country.