All photos by Sheila Regan.

The Cedar Riverside neighborhood is a hotspot of activity, with many theater and music venues, as well as diverse ethnic food offerings.  As resident demographics have changed over the years, so have small businesses, which now include a strong contingent of hard working immigrant business owners doing their best to make their way in the thriving, if at times challenging, area.

Lisa Hammer from the West Bank Business Association (WBBA), which aims to provide a collective voice for business owners in the area, said the Association makes strong efforts to engage the immigrant community.  They have several immigrant-owned business owners as delegates, who do what they can to keep many of the immigrant small business owners informed about the issues that WBBA works to solve as well as funding opportunities that WBBA administers. These funding opportunities include city-funded façade improvement grants which match up to $7,500 and outdoor lighting grants to improve safety.

Rossom Solomon, owner of the Red Sea Bar and Restaurant, is one WBBA delegates. He’s also the secretary of the West Bank Community Coalition and chair of the safety committee, which is a joint committee for both WBBA and WBCC. Red Sea received one of the façade improvement grants.  He said one of the main challenges in his outreach efforts with small business owners is that many of them don’t have time to attend meetings.   While many Somali business owners are “by nature business oriented,” Solomon said, many of them don’t see the main organizations as important or necessary.

“Owning a small business is always a challenge,” he said.  “Putting much and time and effort is the only way.”

Solomon has owned the Red Sea for the past eight of the restaurant/bar’s 20 years. Originally from Eritrea in East Africa, he came to the United States and bought the Red Sea after studying engineering at the University of Minnesota.

Solomon said one of the challenges is looking for ways to attract University students to the bar.  “We’d like to tap that market,” he said, “but for some reason or another—particularly safety—they keep away.  They go to places where they are familiar.”  Getting the right bands, or the right performer is one way to get people in the door, he said, “but it’s always tricky.”

To see descriptions of the businesses, click on the box in the lower right corner, and then on “show info” when slide show appears in large screen. To leave slide show and return to article, click the “escape” key.

Near the former location of Bedlam Theatre, on 6th Street off Cedar Avenue and sort of behind Riverside Plaza, is the African International Mall, where business owners sell clothing, fabric, jewelry, and treats, and run other businesses such as drycleaning, tailoring, travel, tax help, and henna art. The mall is mostly frequented by the East African residents of the neighborhood, particularly from Riverside Plaza, but other customers come and visit as well, including some students from the University of Minnesota and Augsburg.

Another business owner from Eritrea is Abraham Kahsay, who owns Kilimanjaro Café.  Kahsay has owned his business since 1999, when he bought it from his uncle.  He’s been in the United States since 1985.  His café serves people who come from all over Africa, as well as those originally from the United States.  “It’s like New York,” he said.  “It’s a nice, cozy gathering space.”

Over the years, the neighborhood has changed a lot, Kahsay said.  “When I came here a long time ago it was a diverse area but it wasn’t dominantly one ethnic group.  There were a lot of students, and Vietnamese, Korean and Ethiopian immigrants.  Now, it’s still very diverse, but the Somali and East African immigrants dominate the area.

Kahsay tries to cater to Riverside Plaza and Somali and East African residents there, but not as much as he would like.  “I’m trying to include some Somali food into the menu,” he said  “But Somalis like to eat their own food most of the time.  I’m working on it to have them come here to eat this food.”

Hussein Samatar, the Executive Director of the African Development Center, is very active in providing support for some of the immigrant business owners in the area.   “It’s a fantastic neighborhood because of its diversity,” he said.  Providing business development support, planning, and lending, ADC serves business owners running restaurants, grocery stores, and other business.  One of the main challenges, he said, is safety, but the strength of the area is its diversity as well as the “unbelievable entrepreneurs in the neighborhood.”

One of those entrepreneurs is Abdi Aden, who owns Afrik Grocery at 613 Cedar Avenue.  The grocery store sells East African and some American foods.  Most of the customers, he said, come from Somalia, where Aden himself is from, and other parts of East Africa.  While the majority of his customers come from the high rises, there are some people that come to his store from surrounding neighborhoods, although parking is a real issue.

Aden has owned his business for ten years.  He said his customers are “the most important ingredient” to his success.  The other important ingredient is, of course, his hard work.  Aden works 16 hours a day, and has about five employees.  His wife helps him out too, sometimes, but she mostly takes care of their five children at home.  He said he may go back to Somalia to visit, but has found a home here in Minneapolis. 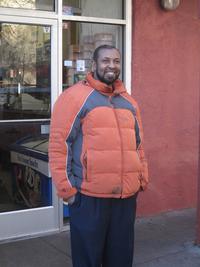 Another Somali business owner is Hassan Elmi (shown in photo), who owns Halal Mini-Market at 410 Cedar Ave, right next to Riverside Plaza.  Elmi has owned his business since 2002, and he prides himself in serving the Somali community and other East African clients.  Elmi came to this country in 1990 and went to school in Virginia where he got a degree in Microbiology and then went to California Polytechnic State University.  After working for a few years, he was laid off, and ended up in Minnesota.  Borrowing money from friends, and “working his butt off” at two jobs, he raised enough money to buy his grocery store.  The business has grown up until the last couple years, where the economy has made things tough.

Like Aden, Elmi said “customer services plays a crucial role” in his success, especially since there are several Halal markets in the same two block radius, though he said competition is a good thing.  Elmi is a member of WBBA, but he doesn’t attend the meetings, what with running his shop and taking care of his wife and two kids. But he’s glad the association is around.  “It’s good for the community,” he said, and appreciates the efforts WBBA has put into improve the lighting in the area.Another organization that supports businesses is the West Bank CDC, which has a board of directors elected from the neighborhood.  WBCDC owns 475 housing units in the neighborhood and two commercial buildings on Riverside, where Acadia Café and Mapps are located.  There are several immigrant business owners in those buildings.

WBCDC’s Tim Montgomery said that since 1980 or so, a variety of immigrants have been attracted to Riverside Plaza. With the most recent group, from Somali and other East African countries, there’s an intense interest in business.  “There’s a lot mixed successes,” he said.  In the Acadia space, there were three or four East African restaurants that failed.  “We see a lot of turnover,” he said, “I do know that in general the Somali community faces challenges because opening a business is so popular many jump into it without knowing all the downsides.”

For example, one business owner used all their money to buy the business and then weren’t able to afford the major rehab needed in order to meet existing codes.  They ran out of cash before they went to the bank to get a loan.

One looming challenge for business owners in the neighborhood, he said, is the future LRT station which will raise the cost of businesses because property taxes and rents will go up.  Businesses along Cedar Riverside that don’t own their buildings will see their rent and cost of parking skyrocket “if there isn’t some policies on the part of the city,” Montgomery said.  “A lot of immigrant businesses will be pushed out.”

Still, the area is clearly well located for business, Montgomery said.  “It’s right next to the University and there’s great transportation and great diversity.”  He also said that the amount of affordable housing is an asset.  Plus, “there’s attractive buildings with historical qualities.”