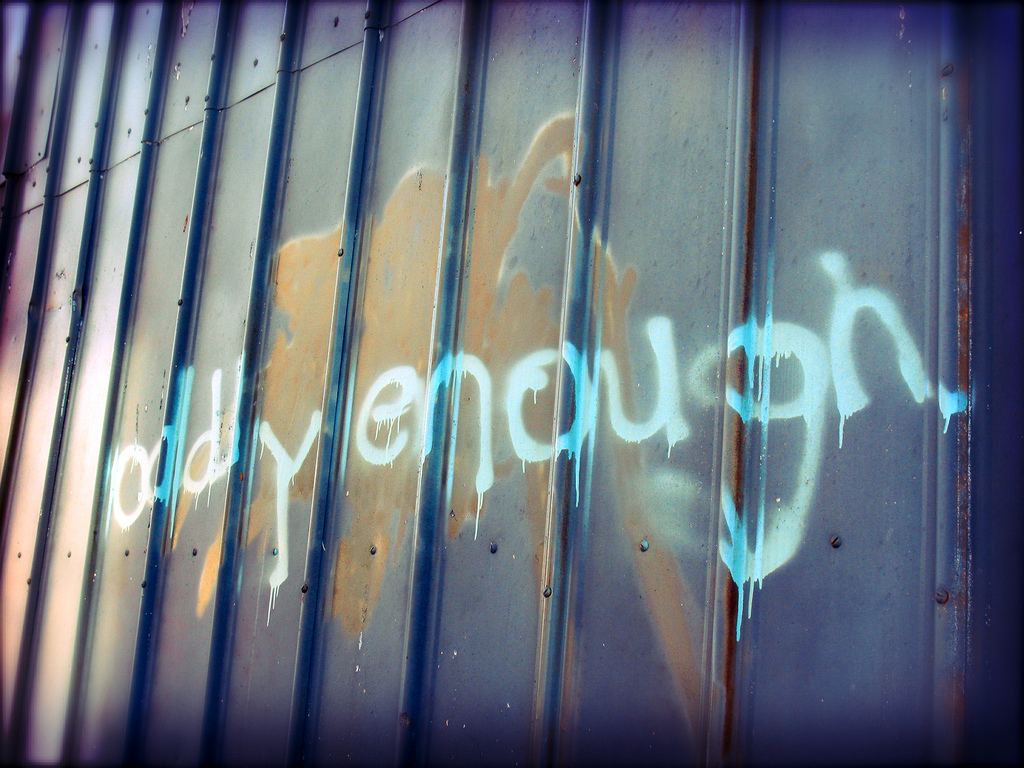 Graffiti behind IFP, photographed in 2008 by Micah Taylor (Creative Commons)

Stop me if you’ve heard this one before. In response to rising debt and decreased revenue, a much-loved, charismatic leader of a Minnesota nonprofit arts organization, which administers several McKnight grants, suddenly gets ousted by the board of directors, much to the shock of many in the community.

On August 16, the Independent Filmmaker Project (IFP) sent out a letter to all its members and announced on its website that Jane Minton, the organization’s executive director, would be leaving. This was followed by an article in the Star Tribune quoting several local filmmakers making positive statements about Minton. The article was widely circulated on social media, attracting comments from many people incensed by the terrible news.

What’s the explanation for the change? The original letter is vague, and the board has not responded to my requests for information. Minton herself cannot say much. When asked whether there is a possible lawsuit, she replied, “I can’t say.”

Many local filmmakers were angered by the cheerful tone of the letter, which refers to the new directions IFP plans on taking, as it announces in the second paragraph that Minton is leaving.

Filmmaker Al Justiniano said he was shocked by the news, calling Minton “the heart of the organization.” Justin Schell, an IFP member (and Twin Cities Daily Planet contributor) who teaches at IFP, said he could always count on Minton to explain things he wasn’t sure about, when he was applying for grants. “She was in charge of making this stuff a reality,” Schell said. “She was always a resource to help.”

Local Filmmaker Patrick Coyle said of Minton, “She has devoted her life to independent film and we owe her a huge thank you.”

Longstanding problems and a “staff uprising”

Some sources say there were problems within the organization, including a mounting debt, salary cuts, and a high staff turnover rate.

One former employee, who requested anonymity, described a “staff uprising” last year, when at the very meeting where it was announced that salaries were being cut, board members spoke of hiring a consultant to come up with a plan to take away some of Minton’s responsibilities. That same former staffer described Minton rarely showing up to work before 11 a.m. or leaving after 5 p.m. “It’s true that Jane could always be seen holding a glass of wine and smoking cigarettes at every film event in town, but she should have been using those events to help raise money for IFP, not extending her network of personal supporters and admirers,” the former staff member wrote in an e-mail.

The board’s executive committee met with staff members a year ago, and then again over the past couple of months, to discuss ways to innovate. It was at that time that some staff who were upset had an opportunity to voice their concerns about Minton’s leadership, according to anonymous sources.

A different staff member, Erik Esse, said “These board members are excellent members of our film community and friends of Jane, so I feel bad that they had to make this very hard decision. They aren’t doing this with spite or casually. This is a huge decision that took some courage to do.”

Allison Herrera, who worked at IFP from 2005-2007 (and is a past member of the board of directors of the Twin Cities Media Alliance, nonprofit publisher of the Twin Cities Daily Planet), said she was a bit shocked when she found out that Minton had been let go. “I can’t speak personally to any wrongdoings in the recent past,” Herrera said, and mentioned that in 2007, Minton did take a 25 percent pay cut. “There’s a lot of outrage right now about her dismissal right now, but we don’t know the full story.”

Funding problems, according to Herrera, have challenged IFP for many years. “This isn’t anything new to them. A lot of media organizations including public television are facing a lot of change. It’s going to be interesting to see where [IFP goes] in the next two years,” she said.

IFP was founded in 1987 when a group of Minnesota filmmakers got together to create a Sundance-bound feature film, Patti Rocks, according to a report by Ann Markusen and Amanda Johnson called Artists’ Centers: Evolution and Impact on Careers, Neighborhoods and Economies (PDF).

The report states that the filmmakers decided to start a Twin Cities chapter of the Independent Feature Project, a national organization also commonly abbreviated as IFP. When they started, there was another larger media artists’ center, Film in the Cities (FITC), which went bankrupt in the early 1990s. The Media Artist Resource Center (MARC) took over FITC’s darkroom, and then in 2001, approached the Minnesota IFP about a merger, which meant adding photography to IFP’s focus. In 2005, IFP moved to a newly renovated St. Paul space at 2446 University Avenue West in St. Paul, a 7,500-square-foot site filled with spacious offices.

According to two anonymous sources, the board discussed moving from their current space in order to reduce costs, but Minton refused. Minton also wanted to become an artistic director, with someone else becoming the executive director, these sources said, but the board decided that this would be too costly. The board also suggested cutting the photography program, but Minton refused to do this as well, said the two sources.

According to Justin Schell, the photography rooms at IFP are underused. And whereas photographers can take classes at National Camera, IFP’s Film and Video department sets it apart. For Allison Herrera, it would be “a tremendous loss” for IFP if they move from the University Avenue location, especially with the light rail coming in.

Minton, who has been a staff member for over 23 years, and a consultant prior to that, will stay with IFP until the end of August. “I’m really sad to leave,” she said. “I’ve loved working with the film and photography community.” She doesn’t know what she’ll do next. While she has made film before, she finds that her talents are better suited to helping others get their projects made.

Minton was surprised by the decision. While the organization developed a new strategic plan in January, it didn’t lead her to believe she would be terminated.

Christie Healey, Chair of the Board of Directors, at first declined to comment on my questions, and then on August 18 wrote in an e-mail, “There will be more information shortly.”

Sammy Sarzoza, an IFP member, thinks that the film industry has changed a lot since the “glory days of film production in the 1990s,” he said. “More needs to be done to focus on new media and emerging artists.” He also believes IFP needs to do more to support filmmakers of color.

James Vogel, a local filmmaker whose film is being presented at next month’s Cinema Lounge, said IFP needs to focus less on commercialism and more on artistic endeavors.  “The quirky, audience-friendly indie films have no place in the world except sending [their] creators straight to hell,” he said.

As for Justin Schell, though he’s upset about Minton’s firing, he plans to continue to teach at the organization. “What I hope is that IFP—whatever direction they go—is still the champion of independent film in Minnesota as it has been for so many years. I hope whatever direction they take, it doesn’t go away.”