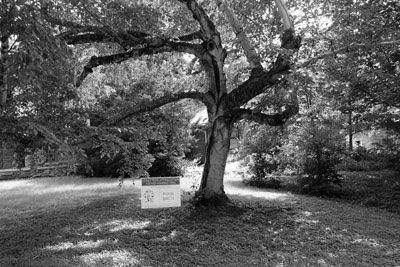 Bernie and Pam Troje’s paper birch at 832 Nebraska Ave. You can see photos of the other award-winning trees at www.district10.org. (Photo by Val Cunningham)

The Como Tree Appreciation Awards were developed three years ago by the District 10 Como Community Council’s Environment Committee to highlight the value and importance of residential trees for homeowners and their neighbors. This year, five winners were chosen from nominations submitted by the public: a gnarled old birch, a young bur oak, a majestic sugar maple, a pair of sentinel white pines and a dignified silver maple.

A neighbor out for a bike ride noticed Bernie and Pam Troje’s paper birch, recognized it was no ordinary tree, and decided to nominate it. The tree stands in the front yard of 832 W. Nebraska Ave. When the Trojes moved into the 1953 home in the mid-1980s, the tree was already there.

“There had been an ash on the boulevard that kept it from growing out toward the street,” said Bernie Troje. “I really don’t know what else kept it from growing straight up instead of bushing out like it has.” A large low branch grows straight across the front yard, providing privacy in the summer and a place for grandchildren to swing from on their way into the house to visit. “I love that branch,” he said. “It really gives the tree character.” Though he said it can be an obstacle when cutting the grass. “I’ve bonked my head on it quite a few times.”

Beth Robelia and Dan Wenkel’s bur oak was a wedding gift from Dan’s parents. They planted it nine years ago in the front yard of their home at 1496 Arona St. It and other trees in the yard are important to the couple for another reason—they have no air conditioner and rely on the shade created by these trees to get them through hot summer days. Every year on their anniversary, the couple sets up a tripod and takes a photograph of themselves in front of their tree. “Oaks are long-lived trees and we hope our marriage is the same,” said Robelia. “Planting an oak is not something you do just for yourself,” she added, since it will not fully mature until the next generation.

Kenton Spading and his wife, Irene, have lived at 1586 Grotto St. since 1986 and estimate that their front-yard sugar maple tree is about 75 to 100 years old. “Through thick and thin, it greets me each day with a smile,” Kenton Spading said. He could just as well have nominated his silver maple, but he admires the sugar maple for its gorgeous color changes, from red budding leaves in the spring to green and then orange and red in the fall.

Spading considers the tree a silent witness to history and a provider of shade and comfort. “If only the tree could talk and relate the history of my house and its families to me,” he said.

According to the neighbor who nominated the two large white pines towering over Natina and Tedd James’ home at 1279 Hamline Ave.: “You feel better just being around them.” Though realtors tried to dissuade the couple from buying this 1904 farmhouse, noting that the grass wouldn’t grow beneath the pines, the couple loved the big trees and felt right at home, Natina having grown up on a farm. They’ve owned the home for 20 years, and about 8 inches of newly fallen and decaying pine needles blanket their front yard. When the couple made an addition to their house, they kept all of their trees in mind and used pile footings to reduce damage to their root systems.

The massive old silver maple in the front yard at 1248 E. Como Blvd. has been admired for its grace and elegance for the past 18 years by a neighbor who passes it on her daily walks. “They have obviously taken good care of it and given it new roles, such as the support of a swing for their children and hanging glass mobiles,” she wrote in her nomination. Ted Benson and Janet Pope have lived in the house for 17 years. Their children, Chandrika and Ankita, have grown up climbing and playing in the tree in all seasons, even winter, when they’d climb up the ladder attached to its trunk to suck on icicles. In 2008, about a third of the old tree came down during a storm and fell onto the roof of the family’s sun porch. Each year one big branch dies back and the couple trims it off.

Only one of the three cables that held the tree together now remains. Its hollow trunk was filled with concrete many years ago.

After storms, neighbors inquire about the old tree. All the care is worth it. “As long as there is one branch for a swing,” Benson said, “we’ll keep it.” As the nominator correctly surmised, these homeowners have “consciously helped their elderly tree maintain its dignity in old age.”