Two weekends ago, I had the pleasure of going to the Guthrie Theater for a reason other than a Vikings Stadium design unveiling. I was there for a performance of Clybourne Park*, which, according to Wikipedia, is a modern response to Lorraine Hansberry’s 1959 play, A Raisin in the Sun. For those who don’t click the links, Clybourne Park is a two act play dealing with 1950s white flight from and 2000s gentrification of a fictional Chicago neighborhood.

Acting was good, plot was a bit predictable if you took more than zero sociology classes in college, and the ending was sad enough to make me feel feelings. There were many opportunities for super gratuitous audience reactions, i.e. audible GASPs and HAHAs at politically-appropriate times, which was a bit much coming from this metro area. Though, to the audience’s credit, when the curtain closed and the lights came back on, it did seem like one of the more integrated groups of people I’ve seen in the same place doing the same thing in a long time.

I wasn’t 100% sure what kind of post I was going to get out of this experience, because there’s really nothing I can say about white flight that you haven’t already heard from a different white liberal–though if it helps, my grandparents stuck around Astoria until well into the late 90s. But, I got lucky! After putting together a collage of different development projects going on in Minneapolis and posting it to UrbanMSP’s Facebook page last week, I struck gentrification gold with the fantastic Facebook comment below. The poster’s name is removed, but for trivia purposes I’ll say that they share their last name with a defunct Milwaukee-based beer company. 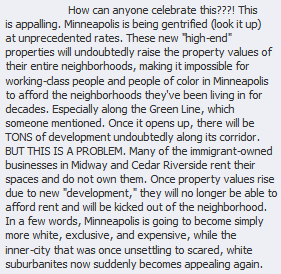 Did you look it up??

This person is no longer around to defend their post, so I’ll try to avoid much direct criticism and instead compliment their excellent grammar, punctuation, and spelling.

I’ll lead with a question borrowed from an instructor I had in college: Is gentrification a real thing? Obviously, it is, it has a Wikipedia page, but I think starting out with that question is a good way to mentally limber up a bit before getting into some serious thinking. That Wiki page cites some examples from Ancient Rome and Industrial Age London, among others. American inner cities weren’t the first place to experience a changing real estate market. It goes without saying that new construction is going to support higher rents than older construction, barring some sort of government or other market distortion–we’ll talk about that in a bit.

But I think the point my instructor was trying to make was that gentrification is often thought of as a very narrow process that has only been taking place from ~1950 to the present in American urban areas, when really it just describes the overall decay and renewal that naturally occurs in any urban area. How do we view Hispanic migrants revitalizing rural towns? Is that bad too? I fully realize there’s a certain degree of naivete on the part of any person of relative privilege writing in a very abstract way about what may be very real to some. But, at the same time, wouldn’t an honest discussion be more helpful than an incensed gasp-off?

The question that I want to ask is, what’s the alternative to gentrification? Continued disinvestment and segregation? The concentration of poverty and those with little political influence? I hate to generalize, but typically the kind of folks who get worked up about gentrification are the same folks who are also concerned about those things. My neighborhood has a mix of income levels–a quick Craigslist search turns up apartments below $500/month and apartments above $3000/month, within a short walking distance of one another. That seems like a pretty healthy equilibrium to me. There are multiple corner stores, at least a couple of which are minority-owned. There’s an East African coffee shop next to a gay bar. That’s what a city is, right?

If anything, some evidence would suggest that artificially constraining supply leads to higher rents for the whole neighborhood, and not just in new construction. If a neighborhood is desirable enough, people of means are going to live there. I don’t want to get into the weeds too much, but I tend to be skeptical of many types of government intervention in housing markets, whether it’s the obviously dubious home mortgage interest tax deduction or the well-intentioned but confusing practice of subsidizing the construction of brand new “affordable” units and then renting them, again, at a subsidy, to low-income tenants, often down the street from far more affordable older units.

We shouldn’t be afraid of reasonable private investment and a shifting market. Without that, we have stagnation, and analogies involving Detroit–no one wants that. With the renewed appeal of urban living, we’ll more than likely end up with some bros living in Uptown. Life will go on. Rents will rise in some areas, some businesses will be forced to close and/or relocate–this process will drive motivated entrepreneurs with low capital to different parts of the city. Life will go on. Those entrepreneurs and new residents will revitalize those areas, and the process will repeat itself like it has in some form for centuries. This is what a healthy city looks like.

*Disclosure: The Guthrie Theater offered streets.mn writers free tickets, which is how I + date saw the performance. Clybourne Park runs until August 4th.

Related: NORTH BY NORTHSIDE | Everyone should go see “Clybourne Park”