When Mesha Camp and her husband lost their little girl seven days after she was born in October, they both knew that they wanted to do something to give back to their community. That opportunity came up for them soon with the Idle No More movement, which started in Canada and has been quickly sweeping the United States by fire. The couple helped organize an enormous political action on Saturday afternoon, an “Idle No More Flash Roundy,” in which more than a thousand Native American people filled the eastern rotunda at the Mall of America, dancing in a circle as the sound of drums filled the area. Not only was the entire rotunda filled with dancers, but on both balconies on the floor above, supporters and shoppers clambered to watch what was happening, capturing the event on their cell phones and cameras. 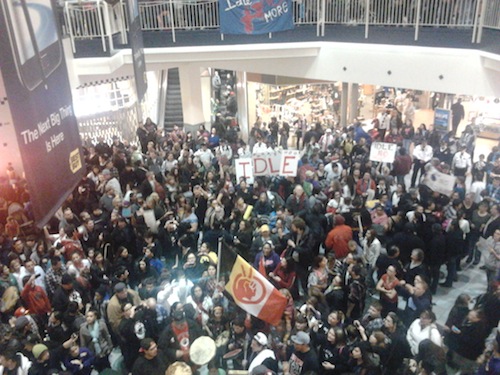 The Idle No More movement stems from an omnibus bill pushed through the Canadian government this year by Prime MInister Stephen Harper and his conservative government. First Nation people and allies say Bill C-45 is a threat to the sovereign rights of First Nations people in Canada, chipping away at the Indian Act, making changes to the control of land on reservations (essentially making it easier to lease the land), and that it will have disastrous environmental repercussions as well.

Political protests have included a hunger strike of Attawapiskat Chief Theresa Spence, and recently many “flash mobs” of dancers across the country. There was a similar action last week (not organized by Camp) in which Anishinabe elder Clyde Bellecourt was arrested, though he wasn’t one of the main organizers from the event, and was sitting on a bench drinking coffee. There was also an action at Paul Bunyan Mall in Bemidji last week. 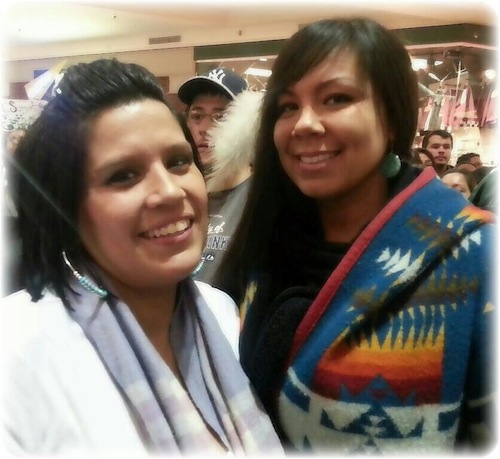 “When I found out that C-45 had passed, and what it meant for Canadian Indians, I knew I had to do something,” Camp said. “Down here, our land can’t be sold. They [the Canadian legislators] made it legal to come in and take those lands, making them unsovereign nations. They’re saying if you don’t give up sovereignty, we won’t abide by the treaties.”

Initially, Camp did not want to use social media to let people know about the action, but because it’s the holidays, and people are so busy, she realized Facebook was the only way to get a lot of people to come.

Camp began planning the Round Dance at the Mall of America before the “flash mob” craze swept in recent weeks. Before she knew it, people were sharing it like crazy, and more than 700 people who RSVP’d to the event.

Camp comes from an activist family. Her adoptive mother, Deborah White Plume, has been active in a number of different actions, including protests against the Keystone Pipeline, and both of her birth parents were at Wounded Knee.

For Camp and her husband, the Round Dances spoke to them. Her husband’s father has a drum group, called the Sun Eagle Singers, and his mother is a traditional dancer.  Each of their five children (three together, and two from other partners) dance as well. “It’s a non-violent action,” she said. “It speaks to youth, helps them to get involved, and look at what’s happening. What better way than with our songs?”

The round dance lasted about a half hour. During the event, there were people with banners, and others who passed out literature, although there were no speeches.

Though Idle No More stems from the political situation in Canada, Camp said that it speaks to Native Americans here in the states as well. “Look at what’s happening in Wyoming,” she said. “All the oil and the fracking that’s poisoning the water on those reservations, and the Violence Against Women Act. Congress won’t pass it because there’s a special provision for Indian Women, who are the highest risk group. There are so many issues that people don’t know about and don’t even want to take a look at.” 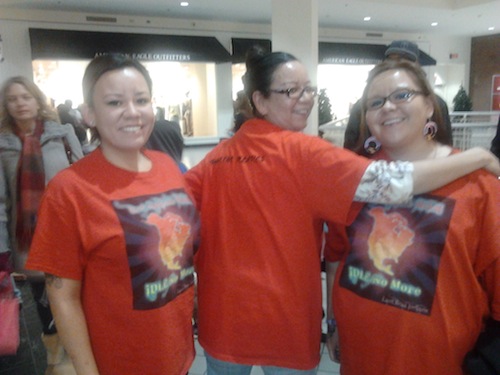 One of the protesters at the Idle No More Action was Allene Ross, a Dakota who is from Minnesota. Ross said she heard about Idle No More through “the moccasin wire.” Ross and several of her friends were wearing Idle No More T-shirts. She feels it is important “for all tribes to stand united,” she said. “We need to defend our sovereignty rights world wide.”

Another elderly woman wearing a Vikings jersey, who asked that her name not be used (she is Red Lake Chippewa), said she found out about Idle No More because “it’s all over Facebook.” She wanted to come and show solidarity with Canadian First Nation People. She’s concerned that if C-45 becomes law, “it could possibly happen here.”