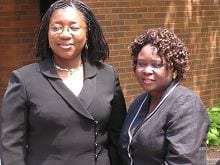 The June 22 conference in Minneapolis, aptly titled African Women in the Diaspora: Empowering Women, Ensuring Africa’s Future, presented a diversity of African women. The conference was awash with bright colors, and laughter filled the room reminding one of the liveliness of the African community. The keynote speakers, Judge Beatrice Ntuba and Judge Vera Nkwate Ngassa delivered spirited speeches in which they recounted their climb to success while noting the role of successful women, not only to young impressionable women, but also to other members of the community. Also of interest was the role that influential men such as fathers and leaders play in a woman’s perception of self-worth.

The conference was the brainchild of Melissa Nambangi, the founder and Executive Director of Minnesota Africa Women’s Association (MAWA). She felt that African women who have settled here needed to network and identify parallel issues within their various communities. Women for years have learned to be modest about their accomplishments, thus underplaying their role in society. She told Mshale she believed it was imperative to celebrate African women in the Diaspora of different accomplishments in an attempt to create dialogue among them and their communities back in Africa.

In a society that still views men as the ideal leaders, Judges Ntuba and Ngassa have created an impressive career, not without struggle. When the British Broadcasting Corporation (BBC) approached them to make a film portraying a positive image of their community, they accepted with much delight. In the film, Sisters in Law, Ms. Ntuba and Ms. Ngassa, judge and prosecutor respectively, walk us through the Cameroonian judicial system allowing us to see not only their role as conscious leaders, but also as gender and human rights activists while performing their daily activities. They successfully prosecute and sentence a child predator, and a wife-beater—a first in the town of Kumba where they practice. Through their influence in the customary court, a woman unhappy with her abusive marriage gets a divorce.

Anietie Umoeka made a presentation in which she discussed the career opportunities available in health and education pre-vocational and vocational programs provided by the East Metro Opportunities Industrialization Center (East Metro OIC) to cater to immigrant communities. In a panel discussing African youth in Minnesota, Hani Hussein moderated a discussion on gender issues and roles facing immigrants.

A Fulbright Fellow at the University of Minnesota, Beatrice N. Gwena presented a study she conducted informing policy makers on policy measures allowing women a big role in the decentralization of forest management in Cameroon from the grassroots level. In her study, Gwena found that many women were not aware of the power that they have in instituting change, while the government ill-afforded them an opportunity. Her responsibility, she saw, was to present her findings to her government to enable it encourage women participation, allowing them a sense of ownership.

Bizunesh Wubie discussed an increased desire of immigrant women with a refugee background to have children based on a research conducted on Ethiopian women. Agitu Wodajo, the Executive Director of ISAW (International Self-Reliance Agency for Women) talked about the predicament of a battered African woman as she is faced with several cultural, social, religious, and language barrier—making her situation even more complex and desperate. To offer insight into the challenges faced by immigrant parents in raising their children, Charity Mentan discussed the complexities in a cross-cultural society where public policy in the U.S. has the state take over the responsibility of the parent.

A panel discussion representative of the African immigrant community in Minnesota discussed the peculiarity of an attempt to resettle refugees in Minnesota a community of massive differences in both environment and cultural aspects.

In a heart-wrenching presentation, Brikti Hiwet discussed obstetric fistula, a medical condition which develops when blood supply to the tissues of the vagina and the bladder (and/or rectum) is cut off during prolonged obstructed labor, according to a description from the The Fistula Foundation, a California-based groups that focuses on raising awareness about the disability. Obstetric fistula can be cured. However, many women that suffer from it are poor with little or no access to medical facilities. The United Nations Population Fund (UNFPA), which has called it the “most devastating of all pregnancy-related disabilities” is working on a global campaign to end fistula. Hiwet also told a heartwarming story of Ms. Mamitu, a woman who suffered fistula, but was cured, and is now a well-known surgeon at the Addis Ababa Fistula Hospital. Hiwet was glad for the opportunity for African women in different specializations in getting together and sharing their experiences as community leaders and activists.

Two young Kenyan women based in New Mexico, Ann Githinji and Chao Sio of Women Can International, with a vision of making a difference in their country, made a presentation on creating HIV/AIDS awareness. They believe the entire Kenyan education system needs a complete overhaul, which will create a new avenue through which the role of gender inequality can be examined along with its role in the spread of HIV/AIDS. According to the two, at an early age, sex education for children can increase their comfort level about sexuality as they enter puberty.

The conference concluded with a promise: an even bigger sequel where both African men and women will meet to discuss the future of not only the African woman but of the continent.