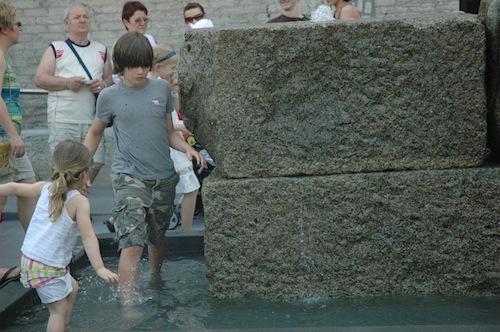 Ice House Plaza, a new privately owned public green space at 26th Street and Nicollet Avenue in Whittier, officially opened on Friday, May 18 with a dedication that included food and beverages from the surrounding businesses (with proceeds benefitting the Whittier Alliance) and music by The New Standards. The celebration came at the heels of news the return of Azia to the corner (the restaurant will reopen as Azia Market Bar & Restaurant at 2550 Nicollet in mid-June) as well as the opening of Icehouse Restaurant. That restuarant, opening on June 7, will feature live music (a cross between the Dakota and the Turf Club, according to co-owner Brian Liebeck) and small plates dining with meats made in-house.

“It’s meant to be a space for the community,” says developer Peter Remes, owner of First & First, who owns the property of the plaza as well as the buildings that house Azia, Eat Street Social, Dunn Brothers, Vertical Endeavors, and Icehouse Restaurant. Remes felt that as the city increases in urban density, green space becomes all the more important. He made a decision to tear down a one-story building, previously a retail space, and rather than creating a parking lot, instead envisioned a place where neighbors and visitors to the local businesses can enjoy a beautiful place to sit and gather.

A central focus of the plaza is the sculptural work of Zoran Mojsilov, whose White Angel stands in the middle of a green lawn. The sculpture is made up of a number of large stones—which Mojsilov says he got from a quarry in St. Cloud—bound together in balance. Mojsilov says that he was inspired by the the notion of pulling and pushing forms, and hanging weight, to create the piece. 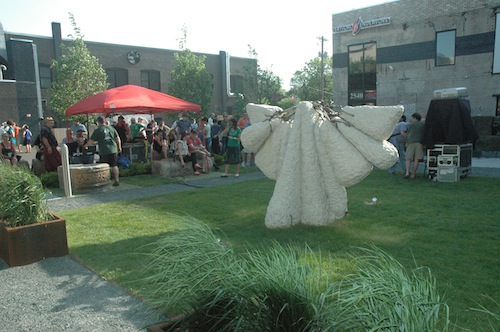 Throughout the plaza there are additional stones that are remnants of the Great Metropolitan Building, torn down in the 1960s. The stones have been preserved in a stockyard in Delano, and Remes purchased them for the plaza. The stones provide places to sit and make up a fountain that on Friday was populated with young children playing. Remes said that Mojsilov “thermaled” the Great Metropolitan Building stones that are used for seating, so that people can sit on them comfortably. “I had Zoran treat the top surface because the stones had these rough and somewhat jagged surfaces that made it difficult to sit on them,” says Remes. In the process of thermaling the stones, Mojsilov took a bit of “creative license” as well, according to Remes.

The Great Metropolitan Building Stones are also being used to make a new patio at Eat Street Social. Though they will not look exactly the same as the stones in the plaza, Sam Bonin, one of the owners of Eat Street Social, said he liked that using the stones created a continuity within the whole area. He says he thinks of the plaza and surrounding businesses as a hub and spoke project, where the plaza is the hub, and each of the businesses play off each other and complement each other.

One of the first big events in the plaza will be part of the Northern Spark Festival, all night between June 9 and 10. Busk until Dawn, presented by Joan Vorderbruggen, who heads up the Artists in the Storefronts Project, and Whittier Alliance. Vorderbruggen says the line-up will include the Riot Act Reading Series, four acoustic bands (Patches and Gretchen, Upstate, Neva Rosina and friends, and Danny Viper), and performance artist Jaime Carrera. 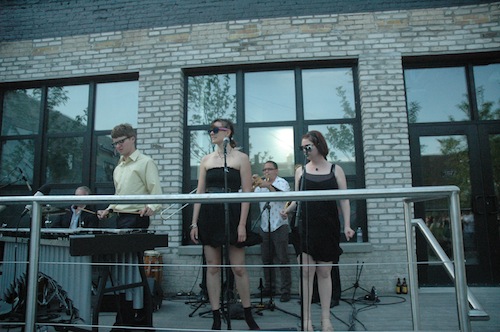 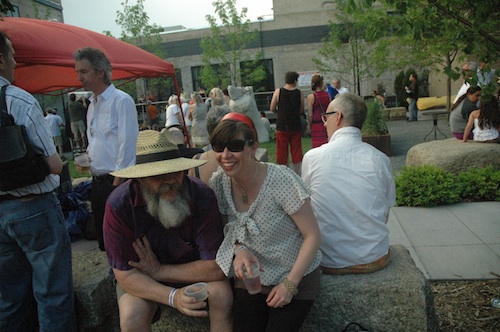