The July 23 concert by rock superstars U2 at TCF Bank Stadium brought hundreds of work hours for members of Local 13 of the International Alliance of Theatrical Stage Employees. Setting up and taking down the giant outdoor set provided about 130 members of Stagehands Local 13 with about 40 straight hours of work, reported Matt Rice, Local 13 business agent. 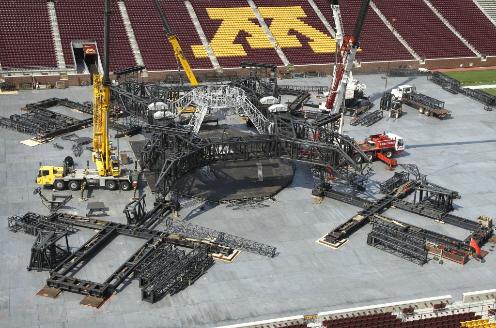 In addition to set up and tear down, Local 13 members also worked spotlights for the show and scene shifts.

“Last year we were dead at this time; this year, we’re swamped,” Rice said. Local 13 members also were working to help present two major events at the Minneapolis Convention Center.

The U2 concert originally was scheduled for June 27 of last year, but was rescheduled when U2’s Bono injured his back.

The U2 concert was the first rock concert presented at the stadium.

Workers covered the playing field with 2-inch-thick aluminum flooring, the Minnesota Daily reported, and the 170-foot tall stage was higher than the stadium’s walls.

The set-up for this year’s show took place during record-high temperatures the week of July 18.

Rice said U2 tours with three sets, each costing $25 million, which leap-frog each other from venue to venue.

U2 tours with 160 trucks, he noted, while a big concert at Target Center might mean 30 trucks.

Was U2 bringing more stuff because the show was outdoors?

“They bring more stuff because it’s U2,” Rice said.

Helping with the U2 show was “exciting for younger members,” Rice said. “Everybody gets a different colored t-shirt with a thank you from U2.”