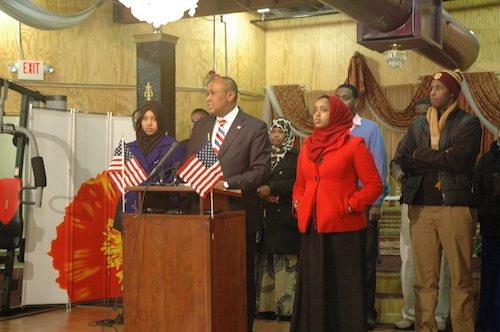 Several South High students spoke at a press conference called by Minneapolis School Board member Hussein Samatar on February 19. The students, who had been present last week at a fight involving more than 200 students and police action to stop it, seemed to be alleging brutality and disrespectful language on the part of the Minneapolis Police Department. In particular, a couple of students who spoke at the press conference said that the officer based in the school, James Loveland, called Somali students “animals” and was physically violent toward them.

When the students mentioned Loveland and the police, Samatar quickly steered the conversation away, saying he didn’t want “name-calling” as part of the press conference. School officials, who responded after the end of Samatar’s press conference, said there is an ongoing investigation into the incident, but would not give more details about how long the investigation would last, or any other details. “We can’t speak about student disciplinary matters,” said Communications Director Stan Alleyne, citing privacy laws.

As for the Minneapolis Police Department, Public Information Officer William Palmer said over the phone that he had no knowledge of the incident, and encouraged any parent or student with a complaint to contact the school or MPD’s Internal Affairs Unit.

Halima Abu Munye, a junior at South High who said she was part of the incident, said the situation was mishandled by the police. She personally was maced, and felt students were disrespected by the police. “The way they handled the situation was intolerable,” she said. In addition, police officer James Loveland, “called Somali students all animals.”

Another junior at South, Kowsar Mohamed, said that tensions leading up to the incident last Thursday have been brewing for more than a year. In her freshman year, for example, people were arrested. “It feels like every time this happens, no one listens to us… We don’t feel safe,” she said. Mohamed grew tearful when she described not being accepted for the way that she is. “I’m not going to accept that,” she said. “I’m going to speak to the trouble we are having.”

Since the incident, Mohamed said she feels safer because there is now a police officer “of my own kind,” and that the school is actually trying to change the environment.

Anisa Farh, also a student at South, said she felt the incident had been coming for some time. “It’s what we’ve been telling about this all along. It wasn’t the first time it happened, it wasn’t going to be the last time. I feel like we don’t have a voice at South. According to Farh, many Somali students got hurt, maced and sent away on ambulences. “It’s a security problem that only Somali students got attacked,” she said.

According to Farh, police officer James Loveland is a problem. “He gets involved in all of the fights,” she said. “He has beat up not one, not two, but three students,” she said.

African American activist Al Flowers, who also spoke at the meeting, said, “For kids to be called animals is a real situation MPS needs to deal with,” he said. “No officer should call kids animals.”

As for what actually happened last Thursday, details are still unclear. While initial reports pointed to a food fight, Abu Munye said that while there was a food fight in the first lunch, that wasn’t what caused the larger fight. Rather, Munye said, a fight that started between a Somali girl and an Oromo boy on the balcony during third lunch is what led to the larger conflict.

The police, Abu Munye said, came in 10 minutes to the fight during third lunch. One police grabbed an innocent person and began choking them against the wall, she said.

“The Somali American community is a new community to state of Minnesota” he said, being only 20-25 years old. The Somali community “is not only black, we are immigrants, we are Africans, and anybody that thinks that easy, I want to speak to them,” he said. The Somali community struggles with the ramifications of a civil war that “essentially decimated the community from that country,” he said. For teenagers, “they fight all the time,” he said, and cultural competency is needed to address those issues.

While Samatar addressed the need for MPS to address these issues, he did acknowledge the work that the student group, s.t.a.r.t., has done to address underlying issues of  difference at the school.

Lamia Abu Khadra, a member of s.t.a.r.t. spoke at the meeting and said she thought the work that s.t.a.r.t. has been doing is being ignored. “It should be promoted so students get a chance to fix the problem,” she said. “This group helps students come together.”

UPDATE: 7:30 p.m. 2/19/2013: On Tuesday Evening, the Minneapolis Police Department issued a statement from Police Chief Jeneé Harteau that said: “I have requested and opened an internal review of the incident. We value the strong relationships we have built with the  Somali and East African communities, and I take any allegations that threatens that in any way very seriously.”