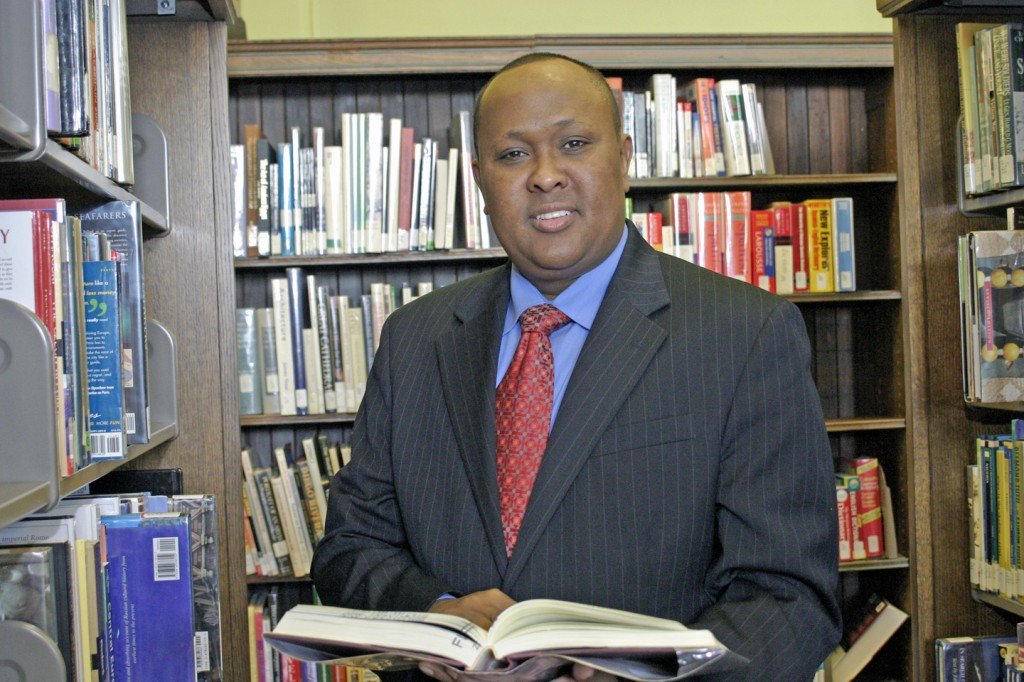 In this December 22, 2005 photo, Mr. Hussein Samatar meets with Mshale for an interview at the Franklin Library in Minneapolis following his appointment to the now defunct Minneapolis Library Board. Mr. Samatar died Sunday, August 25, 2013 following complications from leukemia. Funeral service is today, Monday, August 26 at 1:00PM at the Burnsville Masjid. (Photo: Richard Ooga/Mshale)

In a March 6 message to friends and supporters Mr. Samatar announced that he was on December 4, 2012 diagnosed with Chronic Lymphocytic Leukemia (CLL) and since the diagnosis had gone through three cycles of chemotherapy and doctors pronounced him as responding well to treatment.

He tweeted a message to followers on May 21 that he was going for a bone marrow transplant on that day and followed again with another tweet on May 27 that the transplant went well but that “it was gruesome”.

His last tweet was on August 4 where he said he had been hospitalized for the previous two weeks.

Mr. Samatar graduated from Somalia’s National University in 1991 just as civil war was erupting and he eventually found his way to Minnesota where he enrolled at the University of St. Thomas earning an MBA and working as a banker for Wells Fargo.

It was while at Wells Fargo bank where Mr. Samatar realized how difficult it was for new African immigrants to obtain loans to start or finance their businesses. He left the corporate world in 2004 to launch the African Development Center so as to provide microloans and technical expertise to emerging African immigrant businesses.

Over the years, the center also branched out to providing first time home buyer training to African immigrants.

Mr. Samatar’s activities with the African Development Center garnered him substantial press coverage over the years, but it was his appointment in November 29, 2005 by Minneapolis Mayor RT Rybak to the now defunct Minneapolis Library Board that brought him to the attention of the wider public and to the larger African immigrant community following a much read profile of him by Mshale on January 2006 following his appointment. The Minneapolis library system was eventually absorbed into the Hennepin County Library system.

The success ADC was having with helping African immigrant businesses get off the ground led Samatar to lead the organization in another ground breaking innovation in partnership with the City of Minneapolis in 2006, lending that is compliant with Islamic law which prohibits the charging of interest rates.

In the Sharia compliant system of lending, instead of charging interest, Samatar’s ADC estimates how long it will take to pay the loan, combines that with the calculated interest and combines the two to make one lump sum “It feels like, looks like and acts like a loan, but it’s just a different way of looking at it,” Samatar said at the time.

In 2010, Mr. Samatar, virtually running unopposed won an election to the Minneapolis School board, an achievement that made him the first Somali-American to be elected to public office in Minnesota. Mainstream media declared the win as one that “most likely made him the first Somali-American elected to public office in the country.”

“I join the rest of the Minneapolis Public Schools community in mourning the loss of Director Hussein Samatar,” said Dr. Bernadeia Johnson, superintendent of schools. “Hussein was a passionate leader, a committed public servant, a dedicated collaborator and a valued friend. My thoughts, prayers and the condolences of countless others at MPS and in our larger community are with his family as they grieve his passing and celebrate his legacy.”

In a statement to Mshale, Minneapolis Mayor RT Rybak said one of his greatest pleasures as mayor was getting to know Samatar.

“He has been an extraordinary leader and a real friend,” Rybak said. “I am heartsick about losing him, but I will look for solace in knowing how many people he helped.”

Mr. Samatar is survived by his wife Ubah and four children.

A message from ADC said funeral services for Mr. Samatar will be held today, Monday, August 26 starting at 1:00PM at the Burnsville Masjid. The masjid’s address is: 1351 Riverwood Drive, Burnsville, MN 55337.

The service is open to the public.