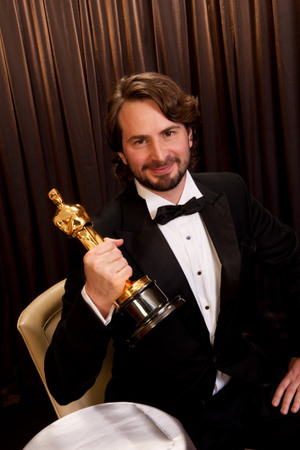 HOLLYWOOD, CALIFORNIA—The Hurt Locker’s Mark Boal, the Oscar Winner for Original Screenplay at Sunday’s 82nd Academy Awards, found himself defending his script to the media at his backstage interview.

U.S. Army sergeant Jeffrey S. Sarver sued the makers of The Hurt Locker five days before the Academy Awards, claiming the central character in the film is based on him, according to ABC News. Sarver believes screenwriter Boal based “virtually all of the situations” in the film on events involving him.

Boal seemed uncomfortable answering reporters’ questions about the lawsuit. “Well, as I’ve said before, Jack is a brave soldier, and the screenplay is a work of fiction and it’s not based on any one person’s story and that’s really all I have on it,” he said.

As a journalist Boal was embedded in the Iraq War and that was what inspired his script, he says. “I had an eye-opening experience in Baghdad in the end of 2004, and I thought that the story of these guys who have one of the most dangerous jobs in the world would be an interesting way to look at the war in a broader sense. And as I said on stage, it was just an idea. I’m tremendously grateful and humbled by the outcome.”

Another film about an officer overseas, Green Zone, is due out Friday. A reporter asked Boal: “Not every movie about the war has been successful. There’s Green Zone, and yours is not going to be the last movie.” Boal answered curtly: “Green Zone has not come out yet. Let’s not damn it.”

“I didn’t say it wasn’t successful yet,” the reporter shot back. “Yours is not going to be the last movie, you know, written about this war. What advice do you have for filmmakers and screenwriters who are going to be writing movies about this war?”

Boal gave the media a longer answer: “I don’t have any, actually. There are many stories left to be told and I’m so proud to be part of a community of filmmakers that has engaged in this topic. And I hope there are many more movies and documentaries and articles and discussion on Iraq, and also in Afghanistan, because these are extremely important historical moments that need to be explored by artists.”

Director Kathryn Bigelow was “a genius to work with” as a scriptwriter, Boal said. “She obviously took the work and knocked it out of the park, in my opinion.”