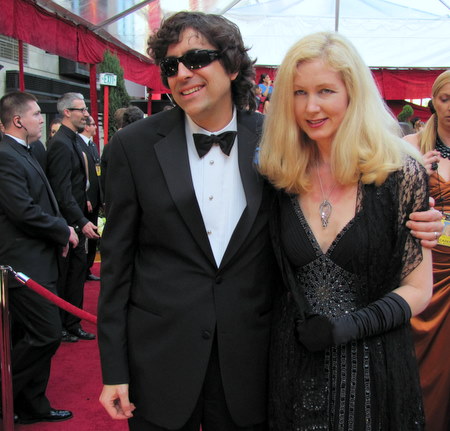 Oscar winners for Achievement in Editing for The Hurt Locker Bob Murawski and Chris Innis. Photo by Lindsay Teed.

HOLLYWOOD, CALIFORNIA—Bob Murawski, one of The Hurt Locker’s Oscar winners for film editing, grew up on horror movies and said that influenced his editing of the film.

“Well, The Hurt Locker is basically a suspense thriller. So, I mean, it was totally up my alley. That’s the reason I was interested in doing the movie,” he said backstage at the 82nd Academy Awards Sunday.

“I worked for a distributor in Detroit [and] we booked movies for drive-ins and inner-city theaters. It’s just a genre I love. The Hurt Locker was a suspense thriller, so it was my kind of picture.”

Co-editor Chris Innis told the media that over 200 hours of footage was shot making the film. “We got a chance to do our first pass, and then Kathryn [Bigelow] came in and gave us notes from there to get things tighter, but we had a lot of freedom with our cuts. So a lot of those choices you see up on screen were things we figured out how to do,” she said.

Murawski added: “It was just a matter of every beat of the movie, trying to figure out what does the audience want to see, what do we want to show them, what shouldn’t we show them, what’s important, what isn’t important, and just basically trying to stay ahead of the characters, and know what is important to tell their story. You know, be in tune with what the characters were doing and what they were thinking.”

Being in tune with the characters of The Hurt Locker was what the two editors had in mind while editing the film. “I think we were trying to treat the conflict between the characters and the action equally and tried to use it,” said Innis. “Jeremy Renner’s character is like an onion and you are peeling away the layers. And I think the conflict is more with the characters than it is with what bomb is going to go off, because that’s an explosive situation in and of itself. The clash of wills.”

Murawski argeed. “The important thing is always the characters, try creating a movie that’s true to the characters, and basically trying to convey what they are going through in the most eloquent fashion .Be it quick cuts or slow cuts, kind of reflect what their situation is at the time. So, just basically getting inside of the head of the characters and knowing what they are responding to and what the audience should see.”

Murawski and Innis are also husband and wife.