“We have staggering needs that are putting America’s greatness at risk, but we also possess an army of men and women who are ready to rebuild their country,” O’Sullivan said. “It’s time for our leaders to get down to business and quit playing games with our future and our workers. It’s time to build Minnesota, build America and build our middle class.”

O’Sullivan and others rallied the crowd gathered on Minneapolis’ historic Stone Arch Bridge, which overlooks the site of the fatal I-35 W Bridge collapse in 2007 and the state-of-the-art span that replaced it in 2008. 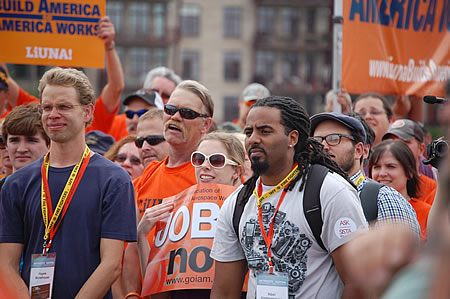 The Fight Back for Good Jobs rally demonstrated growing recognition that the needs facing America’s roads, bridges and water resources can be addressed in a way that creates jobs, grows the economy, helps the environment and lifts up communities, all while leaving behind a positive legacy for taxpayers and future generations.

“We can do more than just build roads and bridges – we can invest in communities by creating local jobs that can’t be sent overseas,” Jones said. “We can create a new transportation system that’s more efficient and will serve America’s needs for decades to come.”

In recent years, America has fallen behind other nations who have raced to expand their transportation systems and water resources. Nations like China and India are investing 10 percent of their gross domestic product in such needs, while the United States only manages to invest 2 percent.

Due to years of neglect, America’s basics now require $2.2 trillion in investment just to meet current needs. More than one-fourth of all U.S. bridges are structurally deficient or functionally obsolete. Congestion on roads causes Americans to waste nearly $4 billion a year in gasoline. Leaking pipes cost the country 7 billion gallons of clean drinking water every day.

Addressing these needs will require action from Congress – including passage of a fully-funded six-year highway bill that would create 8 million jobs over six years while putting America on track to have the roads and bridges it deserves. The last highway bill expired in 2009 and a series of short-term extensions haven’t provided the long-term funding or vision required to address needs or create good jobs.

“Creating jobs is one of the highest priorities for Congress. We need to break the deadlock that has been stifling progress and work together, on behalf of the American people, to create jobs and energize our economy,” said Cardin. “At the heart of our national economic recovery is investing now in our workers who are rebuilding America’s roads, bridges, tunnels and infrastructure.”

Unfortunately, recent proposals in Congress would do nothing to create jobs or address needs. The budget authored by Rep. Paul Ryan, R-Wis., and passed by the U.S. House contains devastating, job-killing cuts to transportation investment that would only accelerate the decline of America’s basics.

“This is a problem that no amount of budget cuts can fix,” Ellison said. “Budget cuts can’t build roads, bridges or water treatment plants. Budget cuts can’t create jobs building Minnesota and America. We need to get down to business in Washington and start having a real conversation about creating jobs and facing our problems.” 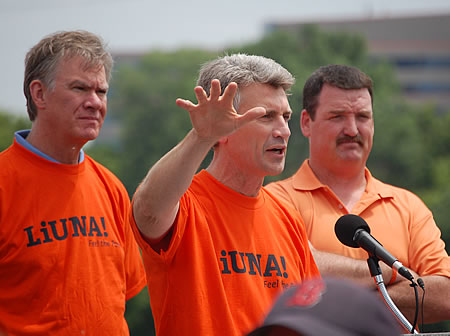 Federal action on repairing America’s basics is especially important as states and cities struggle with budget shortfalls and are unable to make needed investments.

“Minneapolis has seen the worst that can happen when we let our roads and bridges fall into disrepair,” Rybak said. “The collapse of the I-35 W Bridge was a tragic wake-up call. In Minneapolis, we’re accelerating the rebuilding of our infrastructure, but the city can’t do it alone. This is a national issue that requires a national solution.”

“In this economy, cities like St. Paul simply don’t have the resources to do what’s needed,” Coleman said. “Congress is in a position to help us and put our citizens to work.”

Investing in America’s basic needs has drawn support from across the political spectrum. Groups who have supported addressing the nation’s needs include the Sierra Club and the U.S. Chamber of Commerce.

“We can build new roads and new bridges that reduce our dependence on oil and reduce urban pollution,” said Tarryl Clark, co-chair of the BlueGreen Alliance’s Jobs21! Campaign. “We don’t have to choose between helping the economy and our environment. We have to do both, and we can.”

“Building Minnesota would help communities where a good job is hard to come by,” said Scott Gray, president and CEO of the Minneapolis Urban League. “We could provide men and women with jobs right away, while giving them training that would help them for years. We can lift families out of poverty and create wealth that will find its way to local workers and businesses.”

The push to build Minnesota and America comes at a dark time for the construction industry. Nationally, nearly 1.4 million construction workers are without a paycheck. While the rest of the economy has seen a slow, steady recovery over the past two years, job growth in construction has been nonexistent.

“If Congress does nothing, we can’t make investments in our business, whether it’s through buying equipment or through hiring workers,” said Mike Welch, president and CEO of Ulland Brothers, a leading Minnesota highway contractor. “If business, labor, environmental and community groups can agree on this, why can’t Washington?”

In Minnesota, the industry supports fewer jobs than at any time since 1994 – a fact the state’s construction workers feel the impact of every day.

“When my husband and I couldn’t find work, we had to sell our car and move into a smaller house just to get by,” said Sheila Claeson, a construction worker from Woodbury. “I feel that if we put people to work, it’s not just going to help me. It’s going to go back to the community and help everyone.”