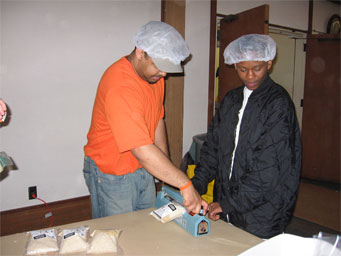 Otis Clark, left, and Timothy Ongen learn about hunger issues at the 30 Hours of Famine program.

Twin Cities teens had their minds on food during the internationally recognized 30-Hour Famine on April 28 and 29. Not so much food for themselves, but food for others.

The event helps to raise money and promote awareness of the thousands of children around the world who die every day from starvation. More than 700 teens representing 33 churches of all faiths in the Minneapolis-St. Paul area participated, getting a spoonful of what life is like to live on an empty stomach, at least for a little while.

“The thing about it is we don’t think about being hungry,” Erica Larson said 22 hours into the hunger strike. Larson, a youth director from Oak Knoll Lutheran Church in Minnetonka, added, “What we think about are all the children who go without food every day.”

The teens camped out at Colonial Church of Edina where they spent the 30-Hour Famine sipping on nothing but water and McDonald’s orange drink. Orange is the international famine color, making the drink fitting for the occasion.

Dressed in orange t-shirts, the teens worked during the weekend to make a difference with the help of Feed My Starving Children, a local faith-based nonprofit organization that organizes assemblage and shipment of nutritional meals to the most poverty-stricken parts of the world. During the weekend, the teens packaged 300,000 meals to feed not just hungry or malnourished children, but starving children.

Cargill and General Mills chemists carefully crafted the meals to be highly nutritional, nonperishable and tasteful, according to Larson. They are made of a soy protein with chicken flavoring, dehydrated vegetables and rice. Illustrations on the packages make it easy to understand that the contents only need boiling water to be made into a meal.

“A couple of years ago when I participated in this hunger strike, we actually tasted the meals, and they are really good,” said Larson. “That was a wonderful feeling — just knowing that when the children do get these meals, they taste good.”

World Vision is a nonprofit Christian organization that organizes the hunger strike every year. World Vision reports that 40,000 children from birth to 18 years of age die every day from hunger — 29,000 of those deaths afflict children under five.

All the meals prepared by Twin-Cities teens will be flown straight to Zambia. Knowing this helps motivate Otis Clark and Timothy Ongen of Progressive Baptist Church in East St. Paul.

“I’ve learned that we can really do a lot to help,” said Ongen. “Being hungry hasn’t really been on my mind at all. Just knowing that we can do so much to help is really good.”

“The people at my church are socially aware and socially conscious to make a difference globally,” said Clark, a youth leader for Progressive Baptist.

The teens also participated in fundraising efforts before and during the weekend to help raise $100,000 for the meals they prepared.