A day-long conference at Minneapolis City Hall May 27 honored the legacy of Hubert H. Humphrey, Jr. on the centennial of his birth. Speakers throughout the day of policy discussions remembered the late Minneapolis Mayor, U.S. Senator, and Vice President of the United States as a courageous champion for civil rights and the labor movement.

One of the featured speakers was Hubert H. “Skip” Humphrey, III, son of the late Vice President, who is a former Minnesota Attorney General and also a former state legislator.

“Today will be about history but today is really about tomorrow,” he said, opening the conference. “Where are we going to go? Where is the progressive, forward-looking politics that my father represented going to be tomorrow? Our city, our state, our country needs that kind of politics.”

“Hubert Humphrey’s courage is just outstanding,” said U.S. Representative Keith Ellison. “He valued justice and equality even above party unity,” referencing Humphrey’s historic speech at the 1948 Democratic National Convention, when the then-37-year-old mayor of Minneapolis delivered an impassioned speech on civil rights. Even though the speech contributed to a walk-out by southern Democrats, it made the Democrats the party of civil rights and brought Humphrey prominence as a new national leader.

“We stand on Hubert Humphrey’s shoulders,” Ellison said. “He said there’s enough for everybody.”

Ellison noted that despite Humphrey’s legacy of winning ground-breaking legislation to advance economic justice, the divide between rich and poor persists and remains a challenge for today.

“I hope we don’t’ get too nostalgic about Hubert Humphrey,” Ellison added. “When he was fighting those historic battles he did not know the outcomes… Let’s band together, hold hands, and let’s all be Hubert Humphrey a little bit today.”

“Government is how we live together,” Ellison said. “The only way to stand up for the public interest… is to shout it from the rooftops.”

Several speakers during the day commented on how changes in technology and communications have transformed politics and public life since Humphrey died in 1978.

Those changes shaped one panel discussion, which addressed “The Future of Labor and Worker Rights in a Global Economy.”

Today’s current and proposed free trade agreements, without labor protections, create a “race to the bottom,” noted panel moderator, Steve Hunter, secretary-treasurer of the Minnesota AFL-CIO. He asked: “How can we use the digital age to empower workers?”

The new social media provides a new way to connect workers, said panelist Jessica Hayssen, field director for the Minnesota AFL-CIO. “Egypt is a good example of a revolution started by social media and young workers… They were able to move beyond government censorship… We saw what happened.”

Hayssen observed that the spark for the recent labor protests in Madison, Wisconsin, came first from graduate school students there. “Young people have a lot of energy. They have a lot of fresh ideas. They need jobs, too… Young people are struggling like never before.”

Unions in Australia are using technology in new ways that are transforming unions, reported panelist Rick Varco, political director of SEIU Healthcare Minnesota. “They’ve got a lot of web-based resources.” Rather than relaying concerns from the rank and file via a steward to a district representatives, workers are using technology to communicate instantaneously. “It really empowers workers on the job,” he said.

As a growing number of workers work for global corporations, Varco added, old models of unionism are no longer working.

“The labor movement was created as an internationalist movement,” he said. “If you look at the long arc of history, maybe that’s the direction were heading.”

“If we’re going to truly face a global economy, we need to be a global labor movement,” agreed Hunter.

The discussion took place three days after the Minnesota legislature adjourned in an acrimonious stalemate over the budget, leading former Governor Carlson to comment, “you cannot govern in a democratic society if you’re not willing to give and take.”

Mondale observed that while Humphrey believed deeply in civil rights, “he had to do a lot of compromising” to pass legislation. “He got it done. He would find ways of compromising.”

His father relished political debate, Skip Humphrey said. Thorough debate over public policy is important “so we can struggle to find the common ground — so we can move forward to solve the common good.” He added: “what’s really challenging is to do it in a way to attract broad support…”

“I’m not sure if you can do it in 140 characters in a ‘Tweet,’” Skip Humphrey said, citing the character limit for messages sent via “Twitter,” one of the new internet communications tools. Twitter’s140-character limit stands in sharp contrast to the famously-long speeches of his father. He joked: “…I’d like to see my father try it.” 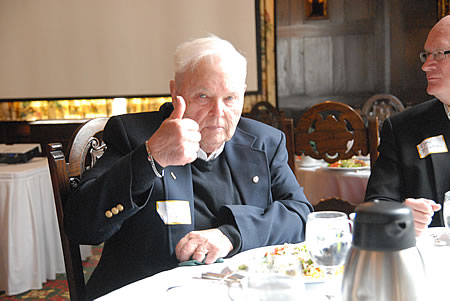 Also on May 27, a luncheon and fundraiser was held for a Humphrey memorial and statue at the Minnesota state Capitol. Those attending included Minnesota AFL-CIO President Emeritus Dave Roe (above). (Photo by Ted Fiskevold)