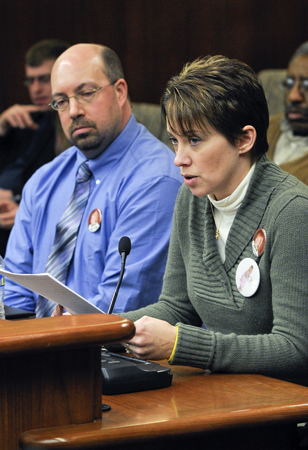 As she had done so many times before, Lynn Johnson dropped off her daughter at day care on June 16, 2006.

It would be the last time.

The 13-year-old son of the day care provider sexually assaulted Johnson’s 2-year-old daughter, Emily, before violently throwing the toddler against a wall. Emily then laid there for two hours while her brain was deprived of oxygen, which caused irreversible brain damage. She was taken off life support one day later.

“The prosecutor in our case has stated that if she had the option, she would have strongly considered trying this person as an adult,” Lynn Johnson told the House Public Safety and Crime Prevention Policy and Finance Committee Feb. 10.

Travis Johnson, Emily’s father, said the perpetrator pleaded guilty to second-degree manslaughter and served two years in a detention center, lived with his aunt for one year on probation and is now living with his parents until his 19th birthday. At age 19 his juvenile record will be sealed and none of his previous incidents will show up on things like a background check for employment.

“Would you want him or her watching your child at day care, coaching their Little League game?” he said.

At the time of the incident, their daughter’s killer was 19 days shy of his 14th birthday, meaning he could not be tried as an adult.

When kids are not kids anymore

Currently, children ages 14-17 who are alleged to have committed a felony-level offense can be certified as adults for criminal court or may be prosecuted as an extended jurisdiction juvenile to give the child one last chance to stay law-abiding. According to state statute, “If a child is prosecuted as an EJJ and is convicted, the child receives both a juvenile disposition and a stayed adult sentence. If the child violates the juvenile disposition order, the adult sentence may be executed and the child may be sent to prison.”

In other cases it is hoped that a child below a certain age can be rehabilitated.

“These kids are not kids anymore when they commit the intentional act of murder and should be treated as such,” Travis Johnson said. “I do not advocate them being incarcerated with adult offenders, but with juveniles of similar age. They need to be punished.”

Rep. Torrey Westrom (R-Elbow Lake) wants to lower the minimum age to 10 if the child is alleged to have committed a violent juvenile offense, including first- through third-degree murder, first- and second-degree manslaughter, criminal sexual conduct and malicious punishment of a child. It would also restrict a court’s ability to expunge a juvenile record if the juvenile is adjudicated delinquent for committing a violent juvenile offense. A court may now expunge a juvenile court record at any time, unless the child is transferred to the custody of the Department of Corrections.

A bill he sponsors, HF306, was held over by the committee for possible further action. It has no Senate companion.

“The goal and objective here is to improve the juvenile justice system, and not have glaring omissions of injustice,” Westrom said. “It’s not a foregone conclusion that just lowering the age from 14 to 10 that those juveniles committing felony crimes, injuries to persons, would be EJJ or certified as an adult. The courts would still have that review and that discretion. … It’s time to get our arms around this, and not let another family, any other parties and citizens of the state of Minnesota feel the injustice that the Johnsons have felt.”

“My intention is to move forward and not let it die again in committee,” said Committee Chairman Tony Cornish (R-Good Thunder).

A bill last biennium to lower the age to 13, HF317/ SF256, was heard, but not acted upon, by the House Public Safety Policy and Oversight Committee, and laid on the table by the Senate Judiciary Committee. Its sponsors were Rep. Bud Nornes (R-Fergus Falls) and former Sen. Dan Skogen (DFL-Hewitt). Nornes co-sponsors the new bill.

According to the Office of Juvenile Justice and Delinquency Prevention, in 13 states, a juvenile can be tried as an adult at age

13 or lower for the commission of a violent crime; including 12-year-olds in Colorado and Montana, and 10-year-olds in Kansas and Vermont. The age for a transfer to adult certification is 14 in Indiana, but 10 if it is a murder case. A 13-year-old can be charged as an adult for murder in New York.

“What makes 14 a magical age?” Lynn Johnson said. “Why is our daughter lying in the ground while her killer is allowed to continue on with his life with minimal interruption?”

The state public defender and representatives of the state county attorneys and state corrections associations spoke against the bill. The American Civil Liberties Union of Minnesota and Minneapolis Police Chief Tim Dolan sent letters in opposition.

Dolan, who called the Johnson case a “sad isolated action committed by a very sick individual,” believes society can do better for youthful offenders than incarceration. “I know that our adult criminal justice system will not rehabilitate a ten to fourteen year old violent offender.”

Michael Belton, deputy director for Ramsey County Juvenile Corrections, agrees. He said the bill would be “a short-term response that tends to compromise long-term public safety interests,” in part, because studies show a juvenile offender is more likely to be rearrested if sentenced to adult prison because of what is learned from older inmates.

“An adult correctional facility … is not about rehabilitation,” said Rep. Kerry Gauthier (DFL-Duluth). “We cannot put children in those situations.”

State Public Defender John Stuart called Emily’s case a “heartbreaking, shocking crime,” but he reminded everyone that the juvenile court would have more power over the offender compared to adult court.

“This juvenile was convicted of second-degree manslaughter. That’s another crime where the adult sentence is 48 months. You take your 10- or 11- or 13-year-old and they do 32 months in prison then they are on supervised release for 16 months, and they’re done,” he said. “Meanwhile, the juvenile court has got the power, even without the EJJ provision to keep that juvenile under control until age 19. … There’s some things that juvenile court can do for public safety and there’s some things that adult court can do for public safety.”

Rep. Sheldon Johnson (DFL-St. Paul) has spent more than three decades working in the state corrections system. He believes that children barely out of elementary school have no business facing the same charges as an adult.

“Young children have different brain development and research has shown that their ability to reason doesn’t develop until they’re older,” he said. “To think that we’re going to judge children by the same standards as adults is terrifically bad criminal justice policy.”

Lynn Johnson is OK that others don’t view Westrom’s bill as the right answer, as long as they see it as a start.

“We have asked to revamp a system that failed us miserably,” she said. “We want to work with the Legislature. We don’t expect it to be 10. … We want to work with you guys and make the system work for our children and for us as members of society so we can feel safe.”