In my posts about the at least temporary demise of the Northside Food Market and all the problems they brought to the neighborhood, I expressed skepticism of the Healthy Corner Store Program.  I worried that it was nothing more than a farce (and one we taxpayers pay for, no less) that would allow problem businesses to temporarily endear themselves to the city without bringing about actual change.  So I resolved to visit each of the five north Minneapolis stores listed as participating.  The program was slated to run through June 30, 2011, so visiting on the last day or two of the initiative would presumably give me a sense of who followed this through all the way to the end.

My first stop was at the Glenwood Market at 1501 Glenwood Ave N, where I found… 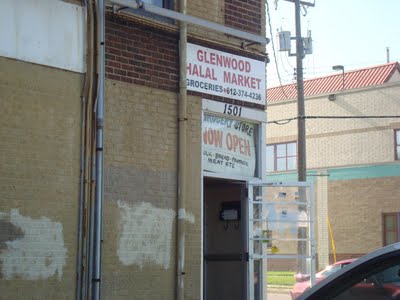 …a few potatoes, onions, and bananas.  That was it for the fresh produce.  The market did have a halal meat section, as well as cooking essentials for African cuisine.  They did, however, have some of the highest markups I’ve seen, even for convenience stores.  Apple juice that sells at Cub for $2 was $3.99 here.  When I asked the employee about the Healthy Corner Store program, he did not know what I was talking about and asked me to follow up when the manager returns in two weeks.

Then I was off to the One Stop Station/Amstar, making a few stops of my own to pick up sign spam along the way. 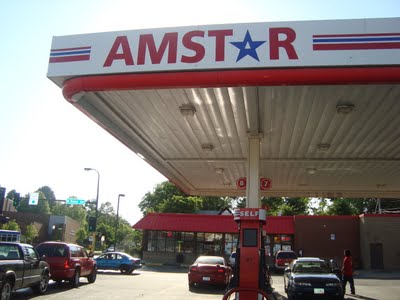 This gas station at 1604 W Broadway Ave was full of your typical gas station fare.  Like the Glenwood Market, there were no signs directing customers to the limited fresh produce (potatoes, onions, apples, and bananas).  And like the previous store, the manager was not on site and the employees knew nothing about a healthy food initiative.

We already know how things turned out for the Northside Food Market.

I took a turn to the north and stopped by Vitalife Pharmacy at 4151 Fremont Ave N. 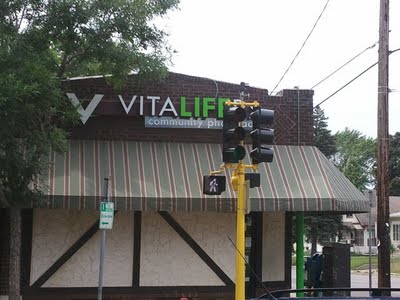 Here I found something rather confusing:  Vitalife did have signs like the one at the top of the post, informing buyers of fresh produce.  But there was no fresh produce to be found.  Their refrigerated and frozen foods were healthier than most places, and the expected convenience store markup was still cheaper than any other place I have seen in NoMi.  But where was the advertised fresh and healthy food?

I talked to one of the employees, who said that they recently discontinued everything but basic fruits like apples, bananas, or oranges.  Their customers just weren’t buying the other kinds of produce, and it was literally rotting on the shelves.  Vitalife identified one problem with this initiative.  Even if the fresh food were to sell at a rapid clip, they just don’t have the sales numbers to justify purchasing in bulk from suppliers to get a competitively priced item.  This meant that a manager often went around to other grocery stores, in search of the cheapest deals.  Then that food would be resold at Vitalife at a slight increase in price.  However, once the food was no longer competitively priced, even less people were buying.

After giving it the old college try, the pharmacy decided this wasn’t working for them.  At this point, I was rather discouraged.  The last stop would be at the Lowry Food Market at 628 Lowry Ave N.  All signs were pointing to an utter failure of the program. 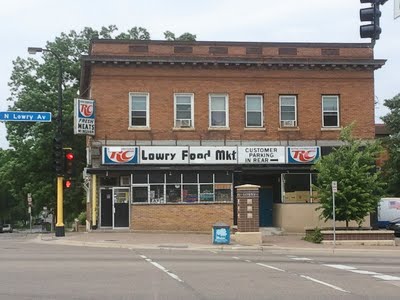 But that sign at the beginning was from the interior of the store.  And it hung directly above this: 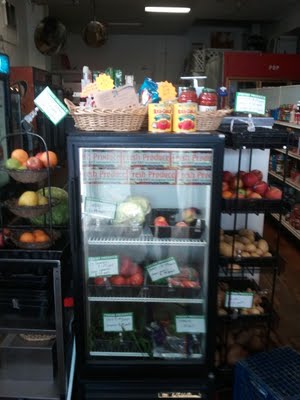 Let’s see what we’ve got here, folks:  watermelon, oranges, peaches, several kinds of apples, potatoes, onions, lettuce, spinach, tomatoes, carrots, and mint.  The owner here said he often has as many as eleven different kinds of fresh produce, and within a day or two most of them are gone.  Prices were a bit higher than at grocers like Cub, but not bad.  The mint, for instance, was $1.99 for a bushel that sells for $1.49 at Cub.  I asked him what he did to match up the produce with his customers, and he said he just listens to what people say they need.  He knows who likes oranges or grapes, for instance, and he makes sure to have those items on hand when the customers typically come looking for them.

There wasn’t much that the Lowry Food Market was doing that Vitalife hadn’t at least tried.  Perhaps the Lowry customers are more used to getting such foods from a corner store than the pharmacy crowd.

The Lowry Food Market made the program, at least in NoMi, something of a success story.  The owner knew of the initiative and took steps to have it implemented at his store.  For whatever reasons, that was not the case in the other four participants.  If the program continues, I believe NoMi will need better results in order to consider this worthwhile.