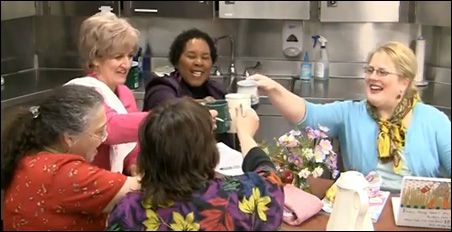 A still from "Budget Holes and Hot Dish," a video spoof produced by A Minnesota Without Poverty.﻿

Need a chuckle? Tune in to “Budget Holes and Hot Dish,” a four-minute video spoof with a serious message about how to close Minnesota’s $5 billion budget deficit.

Produced by A Minnesota Without Poverty in a real Minneapolis church kitchen, the folksy show stars five good-hearted “church ladies,” members of their Ladies’ Aid group tasked with memorializing the recently departed and suddenly consumed by the problems of the state.

Picture a plate of warm, chewy brownies and five mugs of good, strong coffee — shades of the real Ladies Aid of my Norwegian Lutheran grandmother’s generation.

Got potholes on I-94? Fill ’em with tortilla and cheese hot dish: it doesn’t cost all that much, they’ll say.

Not enough money for public transportation?Well, they have an amusing answer for that and other monetary needs until, suddenly, they realize they alone can’t hope to meet the needs of the state and its citizens.

“It was a response to the thinking that charities and churches and congregations can pick up the slack if the Legislature has to cut the budget,” says Nancy Maeker, executive director of A Minnesota Without Poverty. “This was our response to that, mainly that we all need to do our part, which implies revenue.”

The organization’s public policy work group, headed by Alex Fitzsimmons, (legislative affairs and advocacy director of Children’s Defense Fund) brainstormed the message and decided on a funny vein for the video, which cost $2,000 to produce. From there, a group of talented actors took hold. “It was improv we developed from a paragraph scenario,” and this is result after “eight or nine takes,” explains Maeker.

They’ve sent links to every member of the Legislature as well as the state’s Congressional delegation, but haven’t officially heard back. Further, they’re asking voters to share the video with their lawmakers.

It’s “a vehicle to take a message in a humorous way to the entire community,” about the state’s yawning budget gap and the plight of the poor, says Yolanda Cotterall, the actress who suggests hot dish as a new road surface.

“Sometimes the topics of poverty and budget are a tense subject. I think that humor smoothes out a lot of tensions,” Cotterall opines.

When people’s funny bones are being tickled, it’s a lot easier to “appeal to a sense of fairness and healthy community for everybody,” she says, to get people talking about the concept of “what is enough” and sharing, points A Minnesota Without Poverty keeps making.

Fairness and issues of economic and racial justice are “something I live and breathe,” says Cotteral, who in her day job works with the Latino Economic Development Center,

How people should spend their money, how they should get things done, you can’t tell folks, she said. “They have to decide” and maybe humor can help do that.

Which brings us back to the church ladies, who realize the $250 they made from selling their first box of church cookbooks can’t hope to cover the needs. This is bigger than us, they decide, and raise their mugs of coffee to a toast: “to others stepping up.” By that they mean “all sectors of society” with government playing “a substantial role.”

One more thing: Don’t miss the friendly directions posted on cupboard doors, mandatory to communal kitchens: “Please do not use green scrub pads on the stainless…”