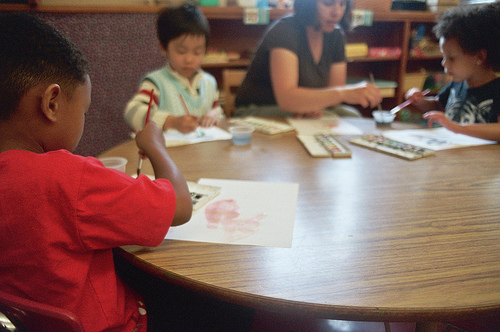 Minnesota’s Parent Aware rating system for early childhood care and education is supposed to help parents choose quality programs for their children. But a closer look at the rating system reveals some disturbing details:
• Nearly all of the programs rated get high ratings.
• Ratings don’t really correlate with how well kids progress in program.
• Hmong providers may be consistently ranked too low, raising questions of cultural competence in the rating system.

Proposals emphasizing early childhood education at the state and federal levels have put a spotlight on Parent Aware, a rating tool open to licensed child care centers and child care, Head Start and School Readiness programs. After completing a four-year pilot phase in 2011, and after undergoing some changes, Parent Aware is designed to help parents choose quality early care for their children. Parent Aware’s effectiveness, and questions about how to improve child care quality for communities of color, were on the agenda at forums sponsored by the Achievement Gap Committee and held at the Wilder Foundation on February 8 and 15.

In Parent Aware-rated programs, accredited child care programs, Head Start and school-based pre-kindergarten programs get an “accelerated pathway” that leads to automatic four-star ratings, according to the program evaluation:

Other childcare providers are rated from 1-4. The criteria for rating include physical health and well being, teaching and relationships, assessment of child progress, and teacher training and education that includes coaching, improvement support dollars, professional development advising and training, according to the website FAQ.

Kathryn Tout, co-director of early childhood research for Child Trends, a nonprofit research center that studies child development, said at the February 8 forum that Parent Aware, which launched its pilot program from 2007-2011, provides policymakers and funders with benchmarks that can be used for accountability.

According to a final report by the Minnesota Early Learning Foundation about Parent Aware, 63 percent of programs rated at the time of the evaluation were automatically rated with four stars, and most programs received a three- or four-star rating in the pilot.

“As of June 2011, 82% of programs received 3- or 4-stars, 15% had 2-stars, and 3% had 1-star,” according to the report. At that time, when the pilot program concluded, 388 programs in pilot areas of Saint Paul, Minneapolis, Wayzata School District, and Blue Earth and Nicollet Counties had current ratings from Parent Aware.

Results from the pilot also showed that children’s gains were not linked to the star level of the provider, according to Tout. The Minnesota Early Learning Foundation final report states that “predicted differences across star levels were not supported by the data for observed global quality in infant-toddler classrooms, observed math and literacy practices, or observed measures of teacher-child interaction quality in preschool classrooms.”

In addition, the report found that “children in programs at different quality rating levels or with different scores on observational measures or Parent Aware quality categories did not differ systematically from each other in their developmental gains from fall to spring.”

Bao Vang, a coach with Think Small, a nonprofit organization that provides resources for early childhood providers and families, works a lot with the Hmong community, where being culturally aware and responsive is key to earning trust. Vang, who spoke at the Wilder Foundation on February 15, said many of the early childcare providers that she works with are often elders, and they think of themselves as babysitters. Part of the work that Think Small has been doing is helping these people transition into thinking of themselves as early childhood providers.

One challenge with the Parent Aware system, Vang said, is that without an education, a provider can’t get higher than a two star rating. “This can be a barrier to my providers,” she said.

Still, as some of the providers that Vang works with build trust with her, they continue to work with her, even though they can’t get more than a two star rating.

One of the main challenges that Vang sees is the language barrier with Hmong providers. Because many providers don’t speak English, that’s a huge barrier in terms of incorporating standardized curriculum. It doesn’t make sense for them to purchase curriculum that they can’t read, she said.

That doesn’t mean that they are not willing to learn. Many of the elders she works with are willing to find ways to adopt and learn new material. One question she’s had is why Hmong religion and culture aren’t a part of the curriculum.

Another challenge is building relationships with parents, as many Hmong parents often use grandparents or family members to be their providers. “It comes back to the trust issue,” Vang said. “Hmong parents are only starting to realize that early childhood education is of value to their children.”

Barbara Fabre, the Director of Child Care and Early Childhood Programs on White Earth Reservation, who also serves on the Governor’s Early Learning Council and advises the Governor on how to increase access for Early Childhood Care, says that for White Earth, which has 20,000 enrolled members, says that tribal licensing has been a godsend to childcare in her area. The tribal licensing mirrors a lot of state regulations, with some adjustments. “We’ve taken the good stuff,” she said. Right now, there are 18 tribally licensed sites, with a licenser on staff with Fabre’s office to administer childcare assistance for the 300 children.

According to Fabre, White Earth has been pleasantly surprised by the Parent Aware system, with 9 of the 19 providers receiving the highest rating of four stars. “It’s been an easy transition,” she said, because the providers had already received training from the tribe. Yet, while it wasn’t a huge transition, she said that partly has to do with the fact that White Earth is such a large reservation. Other tribes, which are smaller, don’t have the staff or resources to implement Parent Aware as successfully.

The other issue to be aware of, Fabre said, is to be respectful of providers and families of color. “How do you rate quality in a cultural context?” she asked. To that end, White Earth has been working with MN Trec, an organization through Leech Lake that does cultural training through the MN Trec. “What we value in cultural teaching may be different from another organization,” she said. Through this program, they are making sure that what they believe is good quality cultural training can be counted in Parent Aware rating and screening.

One area that needs more focus, too, Fabre said, is Family, Friend and Neighbor care from unlicensed providers — the grandmas, grandpas and aunties. Traditionally in the American Indian community, extended family member are the child care providers. “We need to make sure they are not forgotten,’ she said. Though Parent Aware deals with licensed care, the host of families using FFN care deserve the same services.