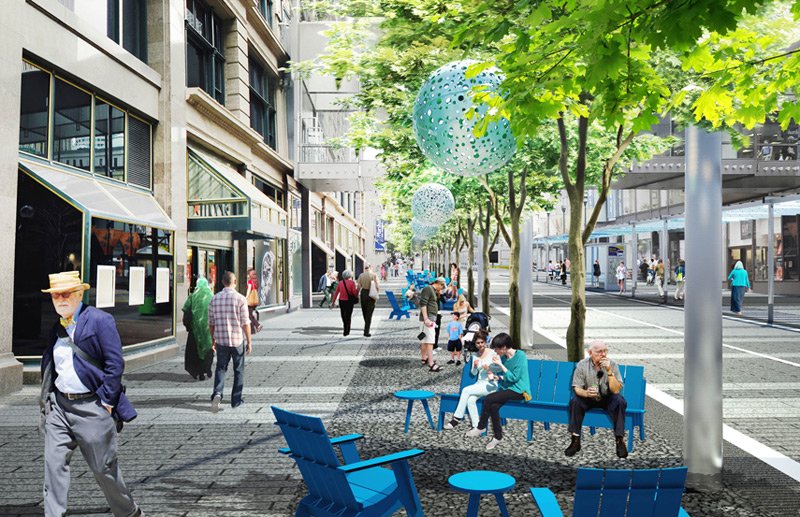 Nicollet Mall is going to look a lot different in 2017: refined pedestrian paths, more greenery and better lighting are some of the improvements to transform the Mall into a “must-see destination” as bullet-pointed in the Minneapolis Downtown’s Council 2025 plan. But before the new Mall becomes a reality, there’s the always-dreaded construction, which starts this spring with utility work (upgrading and relocating power, gas, telecommunications, sanitary sewer and water lines); the full construction begins in 2016.

So what does that mean for the masses of people who bike, walk and work on Nicollet?

The Nicollet Mall Farmers Market will be relocated one block to Hennepin Avenue for both the 2015 and 2016 seasons. Food trucks and vendors will also be moved off the Mall in 2015 and 2016. Sidewalk dining will remain open through construction, but some restaurants may decide to remove it temporarily at some points.

You’ll still be able to walk down Nicollet and access every business—one side of the street will remain open at all times. Buses will detour starting sometime this May and will return to normal when construction is done in 2017. Taxis also are not allowed to drive down the Mall, and they will not be allowed north of 12th Street in 2017. With the absence of taxis and buses, bikers will have the street to themselves at least for 2015. In 2016, when the real construction begins, there will be no bikers allowed until the project is complete.

Feeling a little bummed about the construction? Just flip through some of the photos above that represent the future Nicollet Mall to keep in mind when times get rough (see all photos here).