Minnesota’s first ever Governor’s Pheasant Opener next week couldn’t come at a better time in terms of highlighting the need for supporting working lands conservation. After Gov. Dayton has a chance to enjoy some of western Minnesota’s finest bird hunting, he should take part in an Oct. 15 Land Stewardship Project tour at nearby Moonstone Farm, which is proving that productive agricultural land and prime wildlife habitat aren’t mutually exclusive. It wouldn’t hurt to give the Governor a little invitation via Facebook.

Let’s face it: here in the Midwest the fate of wild birds like pheasants rests in the hands of private landowners. Even in a state like Minnesota, with its vast timberlands and lake country in the north and east, 29.5 million acres is classified as agricultural (predominately in the south and west), which is 58 percent of the state’s total.

The role—good or bad—private ag lands can play in the future of birds like pheasants has become even clearer in recent months as the latest habitat statistics emerge. The DNR recently announced that the state’s pheasant population index dropped 64 percent from 2010, and is 71 percent below the state’s 10-year average.

Part of the blame can be traced back to some nasty weather during the winter and spring. But the DNR is also concerned about the increasing amount of grasslands and other habitat that’s being lost as a result of soaring prices for row crops like corn. Since 2007, Minnesota has lost nearly 120,000 acres of Conservation Reserve Program land (and less good habitat means birds like pheasants are less able to survive a severe winter or wet spring).

The result? The DNR estimates that only around 250,000 pheasants will be shot in the state this fall, the lowest harvest number since 1997. Organizations like the Montevideo Chamber of Commerce know that such dire numbers are bad news for Main Street businesses.

During the next three years, 500,000 additional acres would be removed from Minnesota’s CRP land if no acres are re-enrolled, reducing the total number of CRP acres in Minnesota by 32 percent. That’s troubling given that DNR wildlife habitat goals call for 2.5 million additional acres of restored grasslands to return Minnesota’s pheasant harvest to 1 million birds annually.

And even if CRP continues to be a major presence in parts of the state, it’s not the ultimate answer to habitat woes when considering the big picture. A study published in the Journal of Field Ornithology in 2007 reported on pheasant population research done in Minnesota’s prime pheasant areas from 1974 to 1997, when over 1 million acres of CRP land was added to the landscape.

In localized areas adjacent to CRP ground (within about a mile), the finding—no surprises here—was that the more retired farmland there was, the higher the pheasant count. However, on a regional basis, the positive effect of CRP was canceled out by the negative effect of all that working farmland being converted from small grains, pasture and hayland to annual row crops. Overall, pheasant numbers went down in three of five regions studied, despite the addition of up to 8 percent more CRP grasslands.

In other words, there’s a limit to what retired farmland can do if it’s just an island of wildness surrounded by a domesticated black desert.

This is one reason the term “working lands conservation” has become a part of the lexicon in natural resource conservation circles of late. As the most recent Land Stewardship Letter shows, it’s not just DNR and USFWS biologists who are recognizing the important role productive farmland can play in habitat restoration—private environmental groups like the Nature Conservancy are getting in on the act as well. 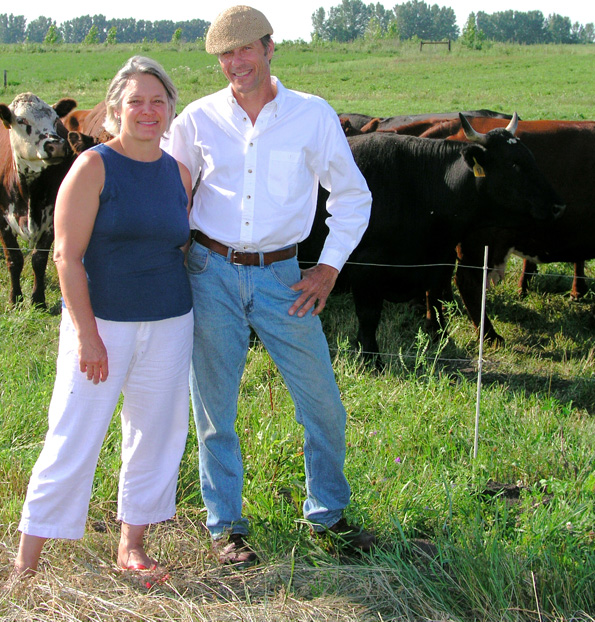 If future Pheasant Openers are to always feature the guests of honor—ring-necked pheasants—then we need more Moonstone Farms. This 5th-generation operation lies in he Upper Minnesota River Valley just outside of Montevideo. Its owner-operators, Audrey Arner and Richard Handeen, have converted the farm from a landscape dominated by annual row crops to a perennial, biodiverse system that produces high quality beef and healthy soil, while also providing habitat for a rich diversity of wildlife, including ground nesting birds.

I’ve been to Moonstone several times over the years, and never cease to be astounded at how the land is responding to this perennialization. Birds and other wildlife thrive on the farm, and water quality in the vicinity is benefiting — an important point considering that the Minnesota River is less than a mile from Moonstone.

The last time I was there, I talked to someone else who is impressed: David Trauba, manager of the DNR’s Lac qui Parle Wildlife Management Area. Trauba and other natural resource professionals are beginning to recognize that publicly controlled WMAs have their limitations when it comes to ensuring future wildlife populations.

Trauba told me in an Ear to the Ground podcast interview that he has great hope that working farms like Moonstone can play a big role in producing ecological services in areas once dominated by prairie systems. He’s basing that on some scientifically quantifiable observations, of course: more birds per acre, greater diversity per inch, less tons of erosion and water testing lower in contaminants. But farms like Moonstone also give off a certain aura that’s hard to fit into a spread sheet or scientific paper. You’ve got to walk the land to get a true sense of what I’m talking about.

As Arner explained to me in a podcast, this wouldn’t mean much in the long term if she and Handeen couldn’t make it pay. That’s why the farmers sell their beef directly to consumers and restaurants that are seeking a natural, great tasting product that’s good for the environment (in fact some Moonstone beef will be on the menu during the Pheasant Opener press conference on Oct. 15). They are making perennialization pay.

As Wayne Edgerton, the recently retired DNR agricultural policy coordinator, told me a while back: “It’s the concerned eater that may be another partner” in working lands conservation.

The concerned policymaker can also be a valuable partner in this effort, since working lands conservation can produce ecosystem services that generate many public goods down the line—including more pheasants.

Obviously, federal policy has a major influence on how much wildlife habitat is present within our agricultural landscapes. But state officials like Gov. Dayton can also play a critical role in promoting and supporting working lands conservation. He can start by making it clear full funding of the MDA’s Sustainable Agriculture Demonstration Grants Program is a priority.

During the past two decades, this nationally respected program has helped Minnesota farmers, including Moonstone, develop numerous innovative working lands conservation techniques. These techniques have resulted in, among other things, prime wildlife habitat on productive ag land. But as we’ve reported in this blog before, this program has recently been all but gutted by the Legislature.

Endeavors that extract resources from the land—such as hunting, fishing and yes, farming—are only sustainable if those doing the extracting provide something in return. Shooting a few pheasants and then acknowledging and supporting the role farms like Moonstone can play in future successful hatchings is one key way the Governor can give back to the land—and our communities.