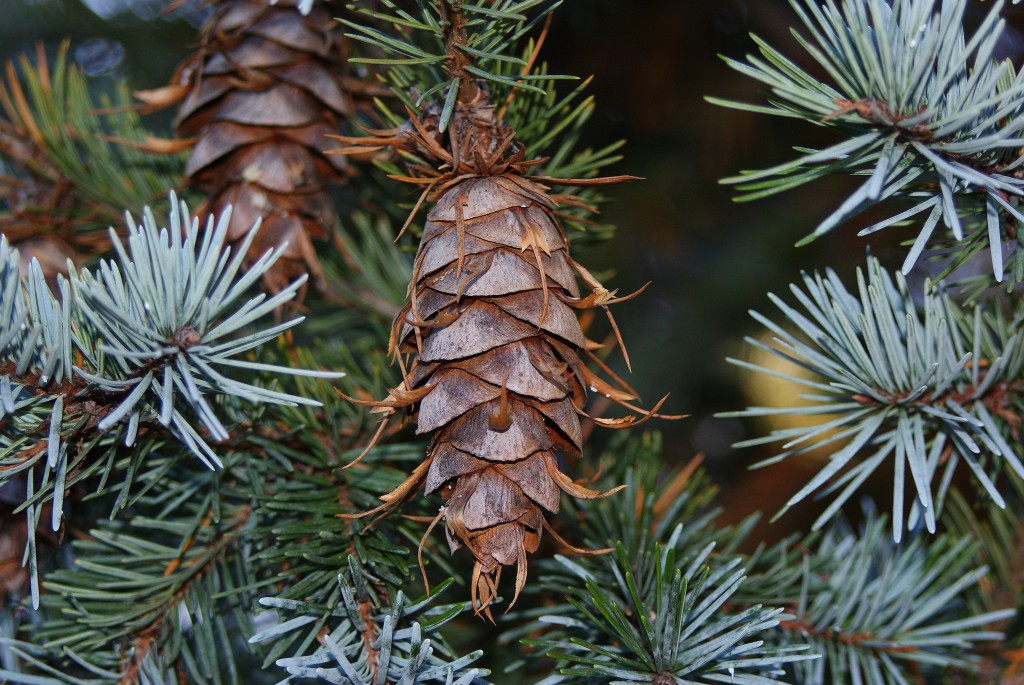 (The photo was taken by Bob Dunlap for Gustavus Adolphus college, and is used here with the photographer’s gracious permission.)

Lewis and Clark called it Tree No. 5 when they made their famous trek through the American northwest 200 years ago. There is no indication that they had any thought of decorating what we now call Douglas-fir, and they most certainly didn’t cut one down and drag it home for Christmas, but no doubt they admired its graceful towering beauty-the species native to the Pacific Northwest reaches 200 feet and more at maturity, and lives hundreds of years.

About 15 years earlier, Scottish physician and naturalist Archibald Menzies was journeying with Captain George Vancouver on the good ship Discovery, and made a brief note about this same tree, which he spotted on the island that would later be named for his captain.

But it was the intrepid plant hunter and Scotsman David Douglas who, in 1827, brought seeds back to England, where it has since become as popular a Christmas tree as it is here, mostly due to its habit of holding onto its needles much longer than spruces or pines, a quality it shares with other firs, such as balsam and Fraser.

Except Douglas-fir isn’t really a fir at all, which is why botanists prefer to hyphenate the name, nor is it pine or spruce. Because it has such distinctive cones, which are the seed vessels and therefore the feature of the plant used to classify it, a whole new genus was coined – Pseudotsuga, meaning “false hemlock” (why not Pseudoabies for “false fir” I can’t tell you). And because botanical etiquette calls for choosing the second name, which narrows it down to species, after the first person to discover it (“discover” here meaning to “write something about it in a European language”), the proper scientific name of the plant is now Pseudotsuga menziesii.

What I really like about Douglas-fir, besides its obvious charms, is its namesake – the unofficial one, that is, a kind of Indiana Jones of botanists, who went to great lengths to find and bring home hundreds of specimens of plants to England at the behest of the Royal Horticultural Society. He kept detailed journals of the plants he encountered, as well as his adventures along the way, which the Horticultural Society published in 1914.

During a plant-collecting expedition in 1826, he went in search of a huge pine tree hitherto unknown to his peers back home, which he had learned about from talking to various Indians, as well as the French settlers who were already pretty well-established thereabouts. Now known as the sugar pine, or Pinus lambertiana, it’s one of the tallest of this genus – like the Douglas-fir, it’s known to reach about 200 feet. The story of how Douglas managed to gather cones of that tree is a colorful one and worth sharing. He not only endured some of the Northwest’s famously miserable weather, but also language barriers and, ultimately, a misunderstanding that required some quick thinking on his part.

Douglas spoke French, knew a smattering of the Indian languages of the area, and always carried a pouch of tobacco, the currency of diplomacy at the time, all of which helped him gather information about the plants he sought. “[T]wo individuals … both talk the Chenook tongue fluently, in which I make myself well understood; from the questions I have put to them and the answers given, I am almost certain of finding [the sugar pine] in abundance,” he wrote in his journal.

But for the journey to find these and other specimens, he had to hire a guide with whom he could communicate only in a form of sign language. And it rained nearly the entire two months of the journey. “The rain of the two days before rendered the footing for the poor horses very bad; several fell and rolled on the hills and were arrested by trees, stumps, and brushwood,” he wrote on October 16, 1826.

About a week later, he wrote, “Last night was one of the most dreadful I ever witnessed. The rain, driven by the violence of the wind, rendered it impossible for me to keep any fire, and to add misery to my affliction, my tent was blown down at midnight, when I lay among bracken rolled in my wet blanket and tent till morning. Sleep of course was not to be had, every ten or fifteen minutes immense trees falling producing a crash as if the earth was cleaving asunder . . .”

The pack horses didn’t like it much, either. “My poor horses were unable to endure the violence of the storm without craving of me protection, which they did by hanging their heads over me and neighing.” But the intrepid collector had his priorities clear – “I am glad I took the precaution of carrying the specimens of seeds and plants on my back, otherwise they would have been much destroyed.”

When he finally reached a stand of the sought-after pine, he measured “the largest one I could find that was blown down by the wind,” which he found to be  57 feet 9 inches around the trunk, and 215 feet tall.

But the coveted cones, containing the seeds that he wanted to take back with him, were at the tops of the very largest trees. He managed to collect only three cones-by shooting them down, which alarmed the local Indians and got Douglas and his guide into a bit of fix. “I took my gun and was busy clipping [the cones] … from the branches … when eight Indians came at the report of my gun. They were all painted with red earth, armed with bows, arrows, spears of bone, and flint knives, and seemed to me anything but friendly.”

The language barrier impeded Douglas’s attempt to explain what he was doing, and the eight declined to set aside their weapons (he doesn’t mention whether he set down his), so Douglas offered them tobacco to climb some of the trees to fetch more cones, while he and his guide beat a hasty retreat.

So it was that the sugar pine was introduced into cultivation. Somewhere in the midst of that particular quest, he also picked up some cones of the Douglas-fir, much to the delight of holiday revelers ever since.