Nicole Kelby is on a book tour that also involves champagne breakfasts and eight-course gourmet dinners. Quick survey: anybody wish you were a critically acclaimed novelist on a foodie book tour? Let’s see…looks like just about everyone’s raising a hand, except a few in the back who are either texting or asleep. Kelby’s recipe for success: a painful childhood, every kind of journalism job there ever was, a couple horrible tragedies, absolute fearless determination, and lots of dishwashing. You, too, can be a famous author! 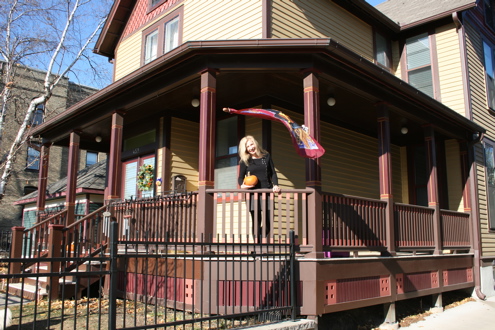 Nicole (who writes under the name N.M. Kelby) just published her seventh book, White Truffles in Winter. It’s an imaginary biography of the very real Auguste Escoffier (1846-1935), the French chef who influenced the world of food and restaurants far beyond his native land. The book is so vivid you can taste it. I talked with Nicole at her St. Paul home, which is conveniently near the Happy Gnome: an excellent location for a food-obsessed writer.

Kelby: My mother was a French chef, but she didn’t teach me to cook. She said I was too clumsy, and I was. She was shot during World War II; she had a lot of physical and psychological problems. When I was 14, I lied about my age and got a job at McDonald’s. I have a long and checkered history with the food industry. Incidentally, that’s how old Escoffier was when he got his first job in a kitchen.

LL: Did both your parents grow up in France?

Kelby: Actually, my mother was living in Senegal when she was shot. Her father was a diamond-cutter there. My father was born into a Polish immigrant family in Toledo. Lived there his whole life and died in front of the same house he was born in. I was born in Toledo, too, but I lived in Florida for a long time. My mother moved us to Tampa after my parents divorced.

LL: I’m starting to see why you became a novelist. 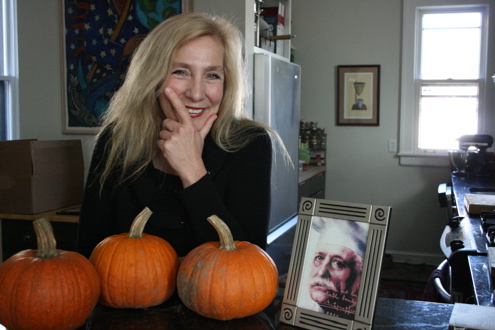 Nicole in her kitchen with a photo of Escoffier.

Kelby: My mother cooked to comfort herself. Cooking transformed and soothed her. She had cookbooks from France, including one by Escoffier that I inherited when she died. That’s what got me started on White Truffles in Winter.

LL: Did your father cook?

Kelby: No, but the Polish cuisine from my father’s side comes in handy at Easter, which is huge for us. My husband and I make all sorts of interesting Polish dishes. We always set a place for those who have gone before us, people we’ve lost in our lives–almost like the Day of the Dead, you know? We make babka, and these Polish jelly doughnuts called pączkis, filled with the homemade jellies and jams we make. Oh, we cook like mad. It’s like a science experiment around here half the time. 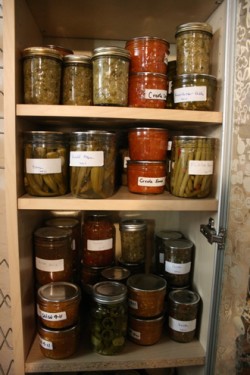 Kelby: I want to set off a food revolution! I want people to see how food connects us to each other! My dad’s last name, my original last name, was Marchewka, which means “carrots” in Polish. That’s gotta be some kind of sign.

Dinner parties are extremely important to me. It’s like communion. I absolutely believe in dinner plate diplomacy. The plate is a sacred place; food should make you think of the larger scope. Food connects us all in a way that’s profound.

You don’t have to be a technically good cook; it’s the offering and the sentiment that’s important. People say, “My mother wasn’t a great cook, but she did this one thing to macaroni and cheese, and it was terrible, but it always reminds me of her.” There are certain things that allow for food memories to be created. There’s a reason why variations on mac ‘n’ cheese are so popular on menus nowadays: they belong to so many people’s memories.

Kelby: Well … people talk about fast food and how horrible it is, but during stressful times in my life I’ve gone to McDonald’s. Many years ago, when I lost my daughter — she was six days old and suffocated in her crib — I wanted a McDonald’s happy meal. There’s something about fast food … it’s like a democracy, it creates a democratic way of eating. I was at dinner recently with a very famous chef, and he talked about how much he likes sliders from White Castle. I thought that was a little surprising, but then later that week, I was talking to a famous food reviewer who said the same thing! KFC, Popeye’s, In-N-Out Burger — they all have their followings. But it’s all about making memories and communing over food.

LL: Fine. So, you grew up in Ohio and Florida. How did you find your way to civilization, i.e., Minnesota?

Kelby: When I was 17, I was interning at the St. Petersburg Times. I knew I wanted to be a writer, but the job market wasn’t great down there. I’d also been writing poetry, and you know what a fabulous, lucrative job that is. Somehow I heard about The Loft and the lively arts community in Minneapolis. I moved up here, got involved with The Loft, and that’s how my writing career started. I got jobs in PR, I worked as a food journalist, wrote for Skyway News, Where Magazine, I was a reporter and anchor for Fox 9 News, I was executive director of the cable access station in St. Paul.

(LL’s note: Kelby’s name then was Nicole Niemi, married to husband #2. If you google “Nicole Niemi,” you’ll learn about some other anxiety-provoking life events that you might have to suffer in your journey toward being a famous author. Maybe it’s easier just to be an unheralded blogger?)

LL: Do you have any special Thanksgiving traditions?

Kelby: You know, Thanksgiving wasn’t much of a tradition for me growing up with immigrant parents. But yes, we’ll have Thanksgiving dinner: I got a Bourbon Red heritage turkey from Darryle at Blue Gentian Farm. We’ll do a honey brine and smoke it with apple wood, on the Weber. I’ll stuff a pumpkin with a chorizo dressing, maybe do a sweet potato praline souffle. Oh, and a brown sugar pie, have you ever had that? It’s a Civil War recipe, like a pecan pie with no pecans. Served with the buttermilk ice cream we made.

LL: Homemade buttermilk ice cream? Is there anything you don’t make?

Kelby: We have two freezers! We make everything! We never go to the store to buy food that’s already made, just the ingredients. But the point of Thanksgiving dinner is that we all sit down at the table, and what’s on the table reflects your life and how you see it. I mean, why do we do that? We could just go look at the Mississippi River and say, wow, the Pilgrims came to this country, now let’s go watch football. But we choose to sit at a communal table and talk and eat. 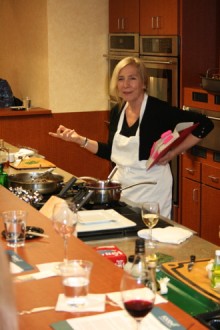 LL: I guess you’ll have to take a few minutes off from your book tour to make dinner.

Kelby: Oh, man. The tour is exhausting but great. I’m doing some cooking classes and readings at Byerly’s (photo left), which I love but it’s hard because of my back. I had polio as a kid and I have a 60 degree curve in my spine, so it’s hard to stand for a long time.

The White Truffles event at Heidi’s was unbelievable. Stewart and Heidi Woodman were absolutely at the top of their game. It wasn’t a dinner, it was like going to church: the idea of experiencing something that takes you beyond your body. Stewart was totally channeling Escoffier, taking people beyond the plate and into part of the great cosmic universe that’s still filled with magic, filled with surprise.

Kelby: Well, when you consider that white truffles are now $100 an ounce, it was a pretty good deal. 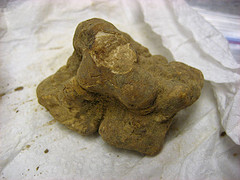 LL: What’s the secret of your success as a novelist?

Kelby: I learned everything I know about writing novels by working in television. It’s all about telling stories.