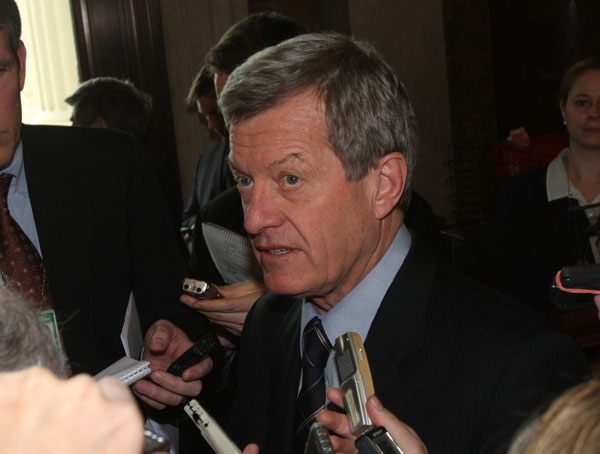 For Erinn Ackley, it was her father’s insurance company denying claim after claim for a bone marrow transplant to treat the leukemia that eventually killed him. For Mark Gendernalik, it was his insurer’s agent refusing referrals for diagnostic tests for his three-month-old daughter, who was suffering seizures. And for pediatrician Mel Stern, it’s been a decades-long scuffle with insurers over claims payments – a battle that’s forced him to stock his office with folks dedicated solely to the task of paperwork-shuffling and claims-haggling.

As conservatives – including Minnesota’s Michele Bachmann – continue to warn that the Democrats’ health reform plans would stick government bureaucrats between doctors and patients, a number of consumers, physicians and former insurance industry employees told lawmakers Wednesday that such bureaucrats are already in place: they’re called private insurance companies. And, bound to shareholders above patients, the witnesses said, these companies are playing a sometimes-deadly game of withholding payments for doctor-prescribed services simply to inflate profits.

“The status quo for most Americans is that health insurance bureaucrats stand between them and their doctors right now, and maximizing profit is the mandate that has simply overtaken this industry,” Wendell Potter, former head of communications at insurance giant CIGNA, said during a hearing of the House Oversight and Government Reform subcommittee on domestic policy, led by Rep. Dennis Kucinich (D-Ohio). “The bureaucracy of private health insurance is a labyrinth of deliberately misleading terms of art designed to help companies minimize the coverage provided and maximize profits to appease Wall Street and investors.”

That status quo, according to many lawmakers, medical experts and consumer groups, provides plenty of reason for Congress to create a non-profit, government-backed health insurance plan to compete with the private companies. Such a public option, Potter argued, is “absolutely vital” in order to protect patients from the “duplicitous” practices of the insurance industry.

Kucinich agrees, arguing that “private health insurance bureaucrats play with the lives of people … when they are at their most vulnerable.”

The comments arrive on the same day that the Senate Finance Committee, led by Montana Democrat Max Baucus, unveiled a long-awaited proposal to overhaul the nation’s dysfunctional health care system – a plan that excludes the public option in favor of non-profit health cooperatives. The co-op model was chosen in an effort to lure the support of Republicans, notably Sen. Charles Grassley (R-Iowa), the ranking member of the Finance Committee, who has said repeatedly that the public option would create a system of government bureaucrats “infringing on the doctor-patient relationship.”

The Baucus bill, however, faces a tough road ahead. Not only are conservatives blasting away at the bill as an expansion of government that will steal services and choices from patients, but liberals are railing against the absence of a public plan to keep insurance companies honest.

Sen. John Rockefeller (D-W.V.), who chairs the Finance Committee’s health subpanel, told reporters Tuesday that there’s “no way” he’ll vote for the Baucus bill as it stands. He pointed to tales of insurance companies denying claims and dropping patients over trivialities – like customers failing to include acne as a prior condition – as reason for lawmakers to push hard for the public option.

“It sounds impossible,” Rockefeller said of the industry’s strategy, “but it happens on a routine basis.”

Linda Peeno provided further testimony that the routine is real. A former review physician for Humana, Peeno said she was evaluated – and rewarded financially – based on claims denials and other tactics that would save the company money. Private insurers, she said, even go so far as to hire outside companies to draft proprietarily protected coverage criteria whose “basic purpose is to deny or limit care.”

“This has never been a more deadly time for patients,” Peeno said.

Conservatives tend not to agree. Micheal Cannon, director of health policy studies at the Cato Institute, told lawmakers Wednesday that the private insurance industry represents a “marvel” of the free market working to benefit consumers. “Health insurance harnesses the self interest of millions of strangers to produce an unquestionably compassionate result,” Cannon said.

Republicans on Capitol Hill are near universal in their opposition to the public option. Rep. Jim Jordan (Ohio), senior Republican on the domestic policy subpanel, used Wednesday’s hearing to promote alternative reforms being pushed by GOP leaders, including health savings accounts and malpractice reform. The public option, Jordan argued, would decrease competition by crowding out private companies.

Yet public plan supporters are quick to point out that insurance companies aren’t health professionals interested in patient care, they’re businesses interested in wrangling profits. And the more claims they delay or deny, the more money they pull in. Indeed, a recent study from the California Nurses Association found that the state’s six largest private insurers have denied more than 20 percent of all claims over the last seven years.

No one has to convince Mark Gendernalik. A schoolteacher in West Hills, Calif., Gendernalik told lawmakers of a series of nightmares his family faced after his three-month-old daughter began having seizures. A refused referral led to an initial misdiagnosis; a neurologist authorized to provide a second opinion was later denied authority to conduct the diagnostic tests; and the expensive drug required for treatment was refused for seven-days while his daughter’s degenerative condition worsened, he told lawmakers.

“Consumers should not have to endure this type of life- and health-threatening hassle,” Gendernalik said.

Providing a physician’s standpoint, Mel Stern, a Maryland-based pediatrician, testified Wednesday that, as a solo practitioner in 1975, he needed only two others to run his office: a nurse “exclusively involved in direct patient care,” and a receptionist to tackle billing, scheduling and claims. Thirty-four years later, he needs four employees to haggle with insurers over claims, coverage and referrals, while he alone delivers patient care.

“Despite the tripling in the ratio of non-clinical support staff,” he said, “I have not noted a significant improvement in the delivery of medical care.”

Erinn Ackley, of Red Lodge, Mont., warned of the potentially tragic effects of such barriers to care. When her father’s doctor OKed a bone marrow transplant in April 2006, she told lawmakers, it was initially denied by his insurer, setting off “an agonizing and bureaucratic appeals process” that ran on for four months. In August of that year, she said, her father finally received his transplant, but he was never able to leave the hospital. William Ackley died in January 2007. He was 59.

“Would there have been a different end to my dad’s story if he had been given approval of the first transplant request in April 2006,” Ackley asked. “We don’t know.”

But 126 days of denials and delays, she added, sure didn’t help.

Mike Lillis is Congress reporter for the Washington Independent.