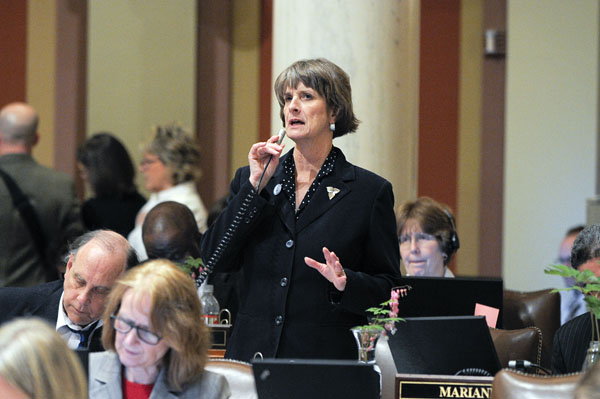 Within four days, HF3833, the newest omnibus K-12 education bill, was introduced, approved by a committee and passed 86-47 by the House May 11.

It replaces HF2431, which was travelling through the committee process until being tabled May 7 in the House Ways and Means Committee.

Rep. Mindy Greiling (DFL-Roseville), the bill’s sponsor, successfully offered an amendment on the House floor that removes the proposal to codify the funding shifts made by the governor through last year’s unallotment process, saying legislative leaders are negotiating a separate plan to address unallotments and repayment of the K-12 shifts.

The Senate does not have a comprehensive education finance and policy bill, instead splitting proposals into smaller bills. The Senate passed two of the bills May 13 that reflect House provisions. Both sponsored by Sen. LeRoy Stumpf (DFL-Plummer), SF3063 would authorize fund transfers for several school districts, and SF2598 would allow Metro Deaf School-Minnesota North Star Academy to be reimbursed entirely by special education revenue.

HF3833 awaits action by the Senate Finance Committee. Lacking a Senate companion, the House omnibus bill’s fate is in limbo, although Greiling is hopeful the bodies could still agree on a “basic education bill.” She hopes it would include several House proposals she said would help school districts manage their finances in tough fiscal times.

“What education groups want the most,” she said, is a proposal that school boards could extend an expiring operating levy referendum without voter approval. It includes a reverse referendum option.

Other measures include a proposal to streamline districts’ ability to bill third-party payers, including Medicaid or private insurers, for special education services. Another would reduce red tape in applying for health and safety revenue to give districts easier access to that funding. The bill also would repeal a statute requiring the administration to tap school districts’ cash reserves for loans before short-term borrowing elsewhere.

School districts served as the state’s short-term lender this year through $1.8 billion in delayed state aid payments Gov. Tim Pawlenty authorized in 2009, and borrowing $416 million this spring from districts with cash reserves of more than $700 per pupil.

Also in the bill is the package of funding formula reforms known as the “new Minnesota miracle.” It is intended to be phased in starting in 2014, and cost $2 billion when fully implemented.

Republicans are troubled there is no revenue linked to the proposal.

“We need to solve our problems that we have now,” said Rep. Paul Kohls (R-Victoria). “This makes our problems worse in the future.”

Greiling said the proposals demonstrate a commitment to invest in public education.

“We should never be ashamed of having a placeholder in our budget that’s not funded right now,” Greiling said, “but when we do (have revenue), we have this plan in place for equitable and fair funding for our students no matter where they live in our state.”

The bill contains some policy reforms needed if Minnesota pursues a federal Race to the Top grant, although meeting the June 1 deadline is unlikely the longer it takes to pass them.

Among them is a provision requiring annual teacher and principal evaluations, modified by an amendment successfully offered by Rep. Carlos Mariani (DFL-St. Paul). “I think Minnesotans would be quite surprised to know there are lots of teachers and lots of principals who are rarely evaluated,” he said. The revised proposal combines support for teachers to improve their performance with more data-based “formative” evaluations.

The bill contains an alternative teacher licensure proposal targeted to mid-career changers, but another pathway the governor and many lawmakers favored is absent. It was unsuccessfully offered as an amendment by Rep. Randy Demmer (R-Hayfield) based on a Mariani-sponsored bill (HF3093) that would allow a limited two-year license for candidates such as Teach for America members, who have a bachelor’s degree and meet other criteria.

The amendment failed 68-65 after nearly two hours of passionate, bipartisan statements of support and opposition.

Mariani urged its passage, but said alternative teacher licensure isn’t a “magic bullet” to close the achievement gap, although it is one piece of the solution.

“This proposal in no way disparages our traditional teachers,” said Rep. Steve Gottwalt (R-St. Cloud). “This isn’t an either-or; it is another tool in the chest.”

Some members wanted the governor’s reform platform, offered unsuccessfully as an amendment by Rep. Pat Garofalo (R-Farmington). It includes tiered licensure for teachers and principals, alternative licensure, a five-year teacher tenure renewal requirement and definitions of an “effective” and “highly effective” teacher based on student academic growth.

“Education is the thing that’s going to drive our state as we move forward,” said Rep. Carol McFarlane (R-White Bear Lake). “We had the opportunity to make some good policy decisions. Unfortunately, I don’t think they were as strong as we hoped they would be.”